Truth and reconciliation programs have become a common approach for rebuilding social ties and promoting healing among communities in the aftermath of war, but little is known about these programs’ effectiveness. In Sierra Leone, researchers partnered with the local NGO Fambul Tok to evaluate the impact of a community-based reconciliation program. They found that while the program led to greater forgiveness of perpetrators and strengthened social capital, it also worsened psychological health.

Wars destroy more than human lives and property—they also damage social ties, especially in cases where neighbors take up arms against each other. Recovering from civil war therefore involves repairing social ties, which has led many post-conflict countries to hold truth and reconciliation processes. These programs provide forums for victims to talk about war atrocities and for perpetrators to confess to their war crimes. Proponents of this approach suggest that the process can be cathartic and provide psychological relief, but others believe exposure to traumatic events can worsen psychological wellbeing. Little rigorous evidence is available on whether and how reconciliation efforts help communities and individuals heal from conflict.

Sierra Leone experienced a devastating civil war from 1991 to 2002. More than 50,000 people were killed and over the half the population was displaced. Much of the violence took place within communities, with members from the same villages fighting each other. Following the conflict, the Sierra Leonean government and international community created a Special Court to try the most high-profile perpetrators and set up a national Truth and Reconciliation Commission,1 but the commission only had the capacity to cover a small fraction of all the atrocities that happened during the war. Very few rural Sierra Leoneans were able to participate, so large swaths of the population were left out of the reconciliation process. To address this gap, the Sierra Leone NGO Fambul Tok (“Family Talk” in Krio) was founded in 2007 to address wartime grievances and facilitate local-level reconciliation in rural communities. It currently operates in five of 13 districts in Sierra Leone. 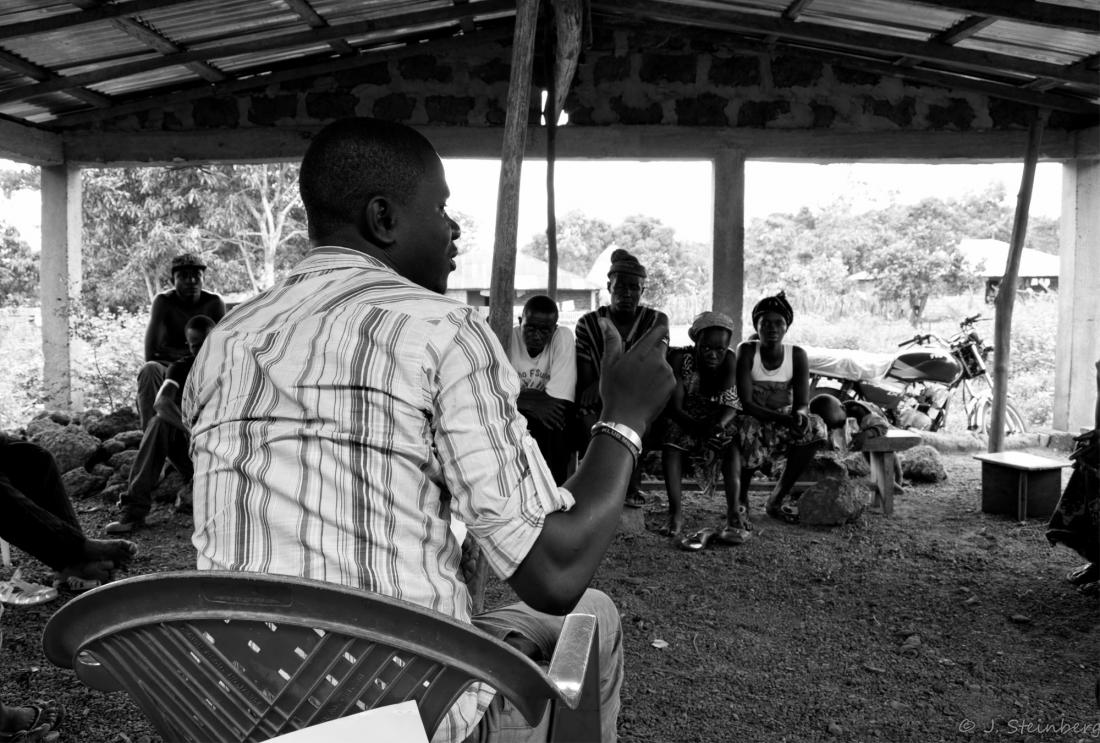 Fambul Tok’s program created forums for victims to describe the violence they experienced and for perpetrators to seek forgiveness for their crimes. (Photo credit: Jeffrey Steinberg)
Jeffrey Steinberg

Researchers conducted a randomized evaluation to test the impact of Fambul Tok’s community-based truth and reconciliation program on forgiveness of war perpetrators, psychological well-being, and social capital. Fambul Tok implemented its reconciliation program in 100 sections of 10 villages. The researchers randomly assigned 50 sections to participate in the program and 50 sections to serve as the comparison group. They surveyed individuals in two villages in each section, including 200 villages in the study.

Like other truth and reconciliation processes, Fambul Tok’s program created forums for victims to describe the violence they experienced and for perpetrators to seek forgiveness for their crimes. No one was prosecuted or punished for participating, and there were no monetary rewards for participating.

Fambul Tok’s program was unique in that it combined the testimonials with traditional ceremonies. Fambul Tok first consulted all village chiefs to get their consent and support for the project. The NGO then coordinated several months of community organization, training in trauma healing and mediation, and outreach to encourage victims and perpetrators to participate in the truth-telling process. These activities culminated in a two-day long bonfire ceremony where victims shared their stories and perpetrators ask for forgiveness for their war-crimes. The ceremony incorporated traditional and religious rituals, including prayers and dancing.

To continue community healing after the ceremony, Fambul Tok set up a symbolic Peace Tree in each village and, in some areas, communal farms. In addition, it helped establish a Peace Mothers’ group to promote women’s economic activities and discuss gender-targeted atrocities perpetrated during the war.

The reconciliation program led to greater forgiveness of perpetrators and strengthened social capital, but at the cost of reduced psychological health.

Forgiveness: Results suggest that the reconciliation process offset negative feelings toward perpetrators of crimes by 30 percent, as measured by an index combining several questions related to forgiveness. There were no significant shifts in attitudes over the culpability of former combatants or their likelihood to participate in future violence.

Social capital: The program significantly increased trust of ex-combatants by 22.2 percent and of migrants, who are often perceived to be ex-combatants, by 6.7 percent. The program did not significantly impact general trust of community members. In addition, social networks were 11 percent stronger in villages that received the program. Individuals in program villages were also more likely to participate in community groups such as Parent Teacher Associations and women’s groups (32 percent and 22 percent increases, respectively). In addition, they were more likely to contribute to public goods, donating to public facilities such as health clinics, or civic associations.

Psychological wellbeing: The reconciliation program worsened measures of psychological wellbeing. It resulted in higher prevalence of post-traumatic stress disorder (PTSD): 11 percent of individuals in the program displayed signs of clinical PTSD, compared with 8 percent of the comparison group, a 36 percent increase. The treatment also increased the prevalence of depression by 47 percent and anxiety by 37 percent. These negative impacts on psychological wellbeing challenge the view that reconciliation promotes individual healing through catharsis or forgiveness. Rather, they are more consistent with a view that talking about the past brings up painful memories and can potentially re-traumatize individuals.

All the effects, both positive and negative, persisted for nearly three years after the intervention. Taken together, the findings suggest that reconciliation processes should be restructured in ways that reduce their negative psychological costs, while retaining their positive societal benefits.

5 result(s)
Reconciliation in Sierra Leone
How Should War-Torn Countries Go About the Reconciliation Process?
Don't mention the war! Talking about conflict heals society but leads to depression among the individuals involved
It’s been 25 years since Sierra Leone’s brutal civil war. Here’s what we know about helping communities recover.
Peace, Recovery, and Reconciliation: Randomized Evaluations in Post-Conflict Environments