Debates: The Impact of Voter Knowledge Initiatives in Sierra Leone

While political debates are often considered an integral part of campaigns, little evidence exists on the impact of debates on voters and candidates. In Sierra Leone, researchers evaluated the effect of publicly-screened debates during the run-up to parliamentary elections. Debates impacted voters’ political knowledge and voting decisions, and also caused candidates to invest more in their constituencies, both during the campaign and one year later.

Political debates are considered a key part of campaign outreach in many democracies today. Particularly in contexts where voters have limited information on candidates, publicizing debates may impact electoral outcomes. Debates can reveal information about candidates’ policy positions, their qualifications and competence, and their personalities. For multi-party electoral races, debates allow both incumbents and challengers an opportunity to represent themselves. Moreover, by creating a public record of their pre-election commitments, debates may increase the subsequent accountability of candidates successfully voted into office. Despite these commonly-held beliefs, little evidence exists on whether debates affect actual voting behavior.

Sierra Leone’s national parliament is comprised of 112 Members of Parliament (MPs), each of whom represents approximately 40,000 residents. Voting patterns tend to reflect historic relationships between ethnic groups and the two major political parties. While debates were staged during the 2007 and 2012 presidential elections, this strategy of political communication—particularly with two parties featured—was uncommon at the time of this evaluation. 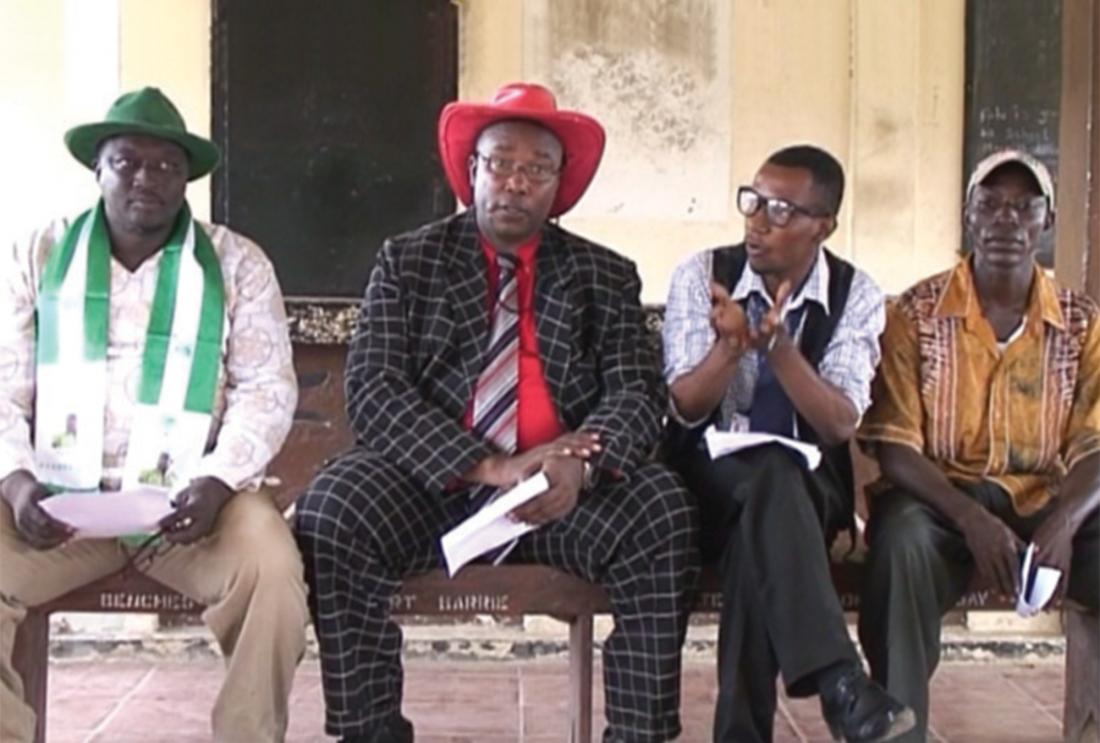 Candidates participating in a filmed debate for the 2012 parliamentary elections in Sierra Leone.

In the run-up to Sierra Leone’s 2012 parliamentary elections, researchers partnered with SFCG to evaluate the impact of disseminating political information via recorded debates on voter knowledge and behavior, candidate campaign spending, and ultimately the performance of elected politicians.

In a randomly selected fourteen of 28 constitutions predicted to host competitive MP races, SFCG organized and filmed debates between the major candidates. In each debate, candidates spoke about their personal backgrounds in an informal “get to know you” session, answered policy and spending questions, and discussed issues such as youth employment, gender equality, and Sierra Leone’s free healthcare initiative. In the fourteen constituencies where debates were filmed, half of a group of 224 polling centers were randomly assigned to host public screenings of the debate between one and five weeks before the election. In total, an estimated 19,000 people viewed the videos.

To estimate each candidate’s debate performance, researchers gathered an expert panel of government and civil society members who scored candidate responses. Additionally, SFCG also asked each public audience to declare a “debate winner” after each viewing.

In a separate group of forty polling centers, researchers also screened the debates to individual voters to test the effects of different kinds of information, such as policy positions, personal characteristics, or persuasive speeches. Voters were randomly assigned to watch the full debate on a handheld device, watch only the “get to know you” session, listen to a radio summary of the debate, or serve as a comparison group. To measure the impact of the debates on voter knowledge and choice, researchers surveyed debate attendees, conducted exit polls, and evaluated official voting records. Once the elected MPs took office, researchers tracked MP performance in spending, engaging with their community, and involvement in Parliament.

Voter knowledge: Public debate screenings improved voters’ general political knowledge, as well as knowledge of specific candidates and their policy positions. For example, the share of voters who knew the amount granted to MPs for spending on a constituency increased by 14 percentage points (from 3 percent to 17 percent) and the proportion of voters who knew candidates’ top spending priorities doubled (from 14 percent to 29 percent).

Voting choices: Exposure to the public debate screening improved the alignment between the voters’ reported policy positions and those of the candidates they voted for. Voters at polling stations that screened the debate were 9 percentage points (an increase from 43 percent to 52 percent) more likely to have voted for a candidate whose top priority issue aligned with theirs. Policy alignment improved not only because voters became more likely to select candidates with views similar to their own, but also because voters sometimes changed their views to match those of their preferred candidate after watching them participate in the debates.

The debate viewings also encouraged voters to support quality candidates. Vote shares for the debate winner (as judged by the debate audience) rose by 5 percentage points at polling centers that screened the debate relative to centers that did not.

The individual voter treatment groups aimed to identify which types of information—from candidates’ policy stances to personal characteristics like charisma—drove changes in voter behavior. While general political knowledge increased for all treatment groups, only the full debate and radio report improved knowledge of candidates’ policy positions. Moreover, only the debate impacted voter alignment with candidate preferences. The fact that the radio report treatment was effective in building knowledge, but only the full debate impacted policy alignment, suggests that personality can sway voters.

Candidate campaigning decisions: In communities that viewed the debates, candidates conducted more visits and increased campaign spending relative to communities that did not screen debates. Treatment group voters also reported receiving more (and higher value) gifts from candidates than those in the comparison group.

Elected officials performance: In the year after their election, MPs who participated in the debates engaged more and invested more in their constituency. These MPs conducted an average of 4.2 community visits (compared to 2.9 in the comparison group) and held around twice as many public meetings. They spent roughly US$6,000 more on verified development projects than the average US$3,912 spent in comparison constituencies; this expenditure nearly equals the total of US$11,000 that MPs had available. The constituents of MPs that participated in the debates were more likely to say their MPs were doing “a good job in promoting” various sectors. The rise in engagements and spending among MPs that participated in debates suggests that the voter knowledge that developed as a result of the debate may have strengthened accountability.

Policy implications: These findings suggest that publicizing debates can increase voters’ political knowledge and candidate choice. Debates may also encourage politicians to invest more in their constituencies, both during their campaigns and after they are elected. Importantly, this evaluation also demonstrates that publicized interparty debates are logistically feasible. While the production costs for the debates were fairly low (US$5,000 each), establishing showings in rural areas increased the cost of publicizing the debates. In settings with greater mass media penetration, debates could be disseminated through different mediums to reduce screening costs and reach larger audiences.

5 result(s)
What Research Reveals About the Impact of Media on Voter Behaviour
Improving democratic accountability in Sierra Leone
Smart African politics: candidates debating under a tree
Do debates change election outcomes?
Teaching those who cannot read how to vote makes for cleaner, fairer elections