An increasing number of low- and middle-income countries have delegated decisions about infrastructure projects to local governments. One concern about this trend, however, is that the process may simply hand control of these decisions to local elites, ignoring the wishes of the majority of citizens. An alternative to having elected representatives make these decisions is direct democracy: allowing citizens to participate directly in the decision-making process. To examine these issues, researchers randomly assigned 49 villages in Indonesia to choose local infrastructure projects through either a direct election or a representative-based meeting. Choosing local infrastructure projects by direct election, rather than through representatives, had a small effect on the types of projects selected but a large impact on citizen satisfaction.

An increasing number of low- and middle-income countries, from Brazil to India to Indonesia, have delegated decisions about infrastructure projects to local governments. Through decentralization, policymakers hope to align new projects more closely with community needs and preferences. One concern about this trend, however, is that the process may simply hand control of these decisions to local elites, ignoring the wishes of the majority of citizens.

An alternative to having elected representatives make these decisions is direct democracy: allowing citizens to participate directly in the decision making process. Proponents of direct democracy argue that it may allow citizens to bypass elite-controlled government institutions. Moreover, broader participation may enhance the perceived legitimacy of the final outcome, regardless of which projects are selected.

The villages in the study participated in the Kecamatan Development Program (KDP), a national government program in Indonesia funded by a World Bank loan. KDP uses a three-step process to allocate grants for local infrastructure projects to approximately 15,000 villages per year. In the first stage, meetings at the hamlet level generate lists of proposed projects. (A typical village is subdivided into two to seven hamlets.) In the second stage, the village as a whole selects one general project, originating from meetings open to all, and one women’s project, originating from meetings open only to women. Finally, at an intervillage forum, representatives of all villages in the kecamatan (subdistrict) rank the village-level proposals, awarding KDP funds to projects down the rank-ordered list until the funds are exhausted. 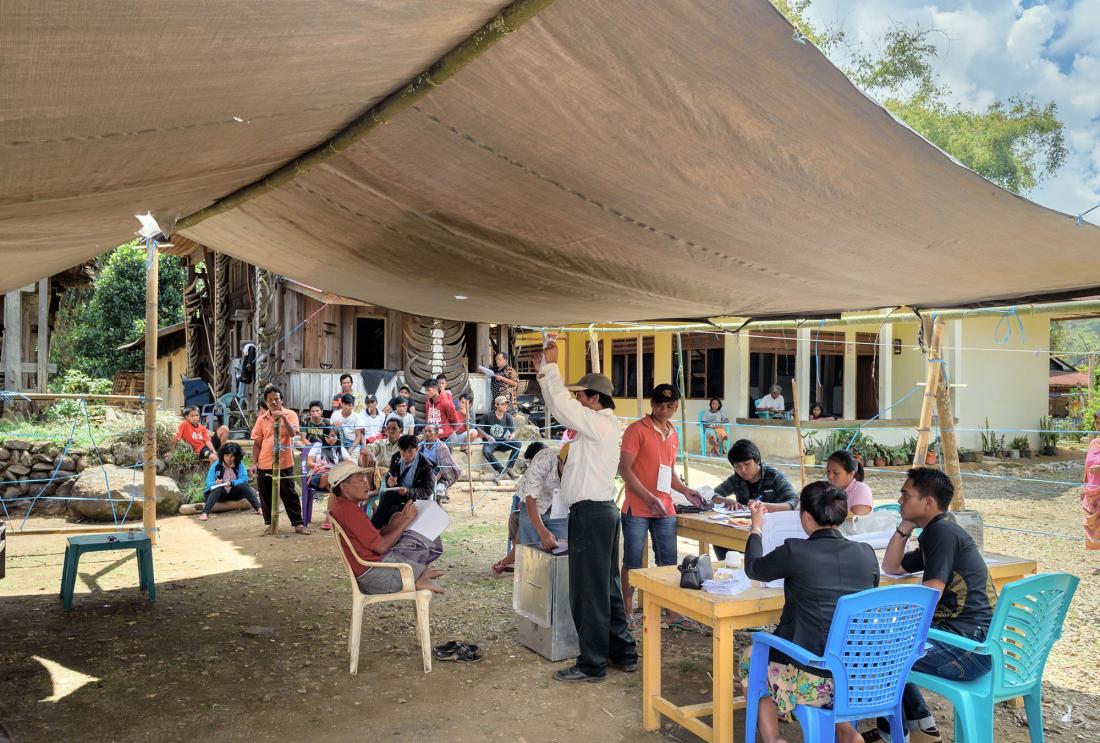 Nearly 80 percent of villagers voted, which means that about 20 times as many villagers participated in the elections as attended village assembly meetings in comparison villages. Photo: Elena Mirage | Shutterstock.com

The policy experiment took place at the second stage of the KDP process, the selection of village-level proposals. Forty-nine villages across three subdistricts in different parts of Indonesia were randomly assigned to a treatment or comparison group.

Researchers collected data on the types (e.g. road, bridge, clean water, etc.) and locations of the general and women’s projects selected by treatment and comparison villages. They also collected data on the relative size of the hamlet where the project would be located, the distance of the hamlet from the village center, and the relative affluence of the hamlet (poorest in the village, richest in the village, or in between, as ranked by the village head). To evaluate the impact of the elections on voter perceptions, researchers conducted a survey before and after the selection process. A separate survey of village and hamlet heads measured local elite preferences.

Turnout for the direct elections was high: Nearly 80 percent of villagers voted, which means that about 20 times as many villagers participated in the elections as attended village assembly meetings in comparison villages.

Elections had little impact on the types of projects chosen. For the general projects, there was almost no difference between representative meetings and elections on the types of infrastructure projects chosen. For the women’s projects, the elections led to more road and bridge proposals, more water and sanitation proposals, and fewer irrigation proposals, but the differences were not statistically significant, perhaps due to the small sample size.

One explanation for these seemingly conflicting results is that the elections intervention did not affect the proposal generating stage of the KDP process. If women in poor hamlets had little power to affect which projects were proposed by the hamlets, it would make sense that those projects reflected elite preferences. Nonetheless, women in the poorest hamlets apparently were not deterred from voting for the projects in their own hamlets, as these were more likely to win at the election stage.

Elections increased satisfaction with the projects and the selection process: People in the elections group were significantly more likely to say that the project was chosen in accordance with their wishes, that it would benefit them personally, and that they would use the project. They were also more likely to say that the proposal was fair, that it was chosen in accordance with the people’s aspirations, and that they were satisfied with the KDP program.

To help determine whether these differences truly reflected people’s attitudes on the KDP projects—and not a shift in views on government more generally—researchers also asked the respondents to rate the performance of the president of Indonesia and the head of the local village. Having the direct elections did not influence these approval ratings, suggesting that changes in people’s feelings about government in general were not driving these results.

Higher satisfaction was not caused by transfers from elites wanting to influence people’s votes: A possible alternative explanation for voter satisfaction was that local elites “bought” votes, either through festivals or parties tied to the elections (a common practice in Indonesia) or direct transfers. However, there were virtually no campaign-style festivals or transfers to villagers reported in the survey.

Direct participation can substantially improve satisfaction with the political process, even if the final outcomes do not change much: More people expressed positive views of the projects and the selection process in villages that had elections. More people stated that they were willing to contribute voluntarily to the projects, and more people could correctly identify details of the projects, in those villages. These differences were all statistically significant despite the similarity of the mix of projects chosen in election and comparison villages, and there was no evidence that they were driven by transfers from elites wanting to influence the vote.

Voting is only part of participation in the policy process. The elections treatment affected only one stage in a three-stage process. The proposal generating stage and the final funding stage may still have been elite-controlled, even though the village selection stage was subject to a vote. Fully enfranchising women and the poor may require increasing their participation at other stages in the policy process as well.

Women’s Participation, Women’s Preferences: When asked about their preferred project type, women more frequently identified drinking water projects (23 percent of women, 3 percent of men), and men preferred roads and bridges (38 percent of women, 64 percent of men). These ratios closely match the actual project selections for women’s and general projects, suggesting that the women’s projects reflect the preferences of women in the village and the general projects reflect the preferences of men. The elections led women—but not men—to more favorably view the women’s projects. This suggests that the increase in satisfaction was tied to increases in participation since only the women were involved in choosing those projects. An evaluation of India’s quota policy for female village leaders found similar results: men and women have different preferences for local public goods and having female leaders led to more projects that matched women’s preferences. For example, village councils randomly selected to be led by a woman were significantly more likely to invest in drinking water facilities, which was the issue most frequently expressed as a priority by women (Chattopadhyay and Duflo 2004).