Sleep deprivation has a negative impact on individuals’ physical and psychological well-being. Researchers evaluated whether providing information and encouragement, improvements to home sleep environments, and in some cases financial incentives increased sleep duration, sleep quality, and the performance and general well-being of workers in an urban setting in India. The intervention increased nighttime sleep but had no detectable effects on cognition, productivity, decision-making, or well-being, and led to small decreases in labor supply and earnings. In contrast, providing people with access to naps at work increased the productivity of workers, their earnings per hour worked, and improved their psychological well-being and cognitive function.

Low-income workers in urban settings face particularly challenging sleeping conditions by usual standards which results in an average sleep duration far below the minimum level recommended by sleep experts.  Evidence from laboratory experiments in middle and/or higher income countries suggests that sleep deprivation has a negative impact on the physical and psychological well-being of humans. As such, experts expect that longer and better sleep will lead to improvements in economic outcomes, specifically increasing productivity and work output.

People can increase their nighttime sleep by either increasing the amount of time they spend in bed at night or altering their environment for higher quality sleep. Another way people can increase their sleep is through napping. Research in laboratory settings suggests that taking naps during the day can be effective at increasing cognitive function and can make up for limited nighttime sleep. However, experimental evidence on the impact of increasing sleep in the real world  is scarce in high-income countries and almost non-existent in low-income countries.

In this evaluation, researchers study the potential effects of increasing sleep duration on cognition, productivity, decision-making, labor supply, and well-being of workers in an urban setting. Can providing low-income individuals in an urban setting with incentives and items to improve their sleep increase sleep duration? Does more sleep at night and/or the opportunity to take naps at work lead to improvements in cognition, productivity, and well-being?

In Chennai, India, people in low-income settings face many barriers to a good night’s sleep such as heat, noise, crowding, light, physical discomfort, and psychological or mental distress. In a survey of individuals across neighborhoods in Chennai, researchers found that sleep is highly disrupted in this setting; adults spent eight hours per night in bed but only slept for 5.6 hours on average. The resulting sleep efficiency— time asleep per time in bed— is much lower than reported in high-income countries and resembles that of US-based patients suffering from sleeping disorders such as sleep apnea or insomnia.

Study participants included men and women from low-income neighborhoods who were fluent in Tamil and could read and write numbers. On average, the participants had ten years of education and one to two children. Participants were recruited for a month-long full-time data entry job and they were not chosen for their baseline level of sleep quantity or efficiency. 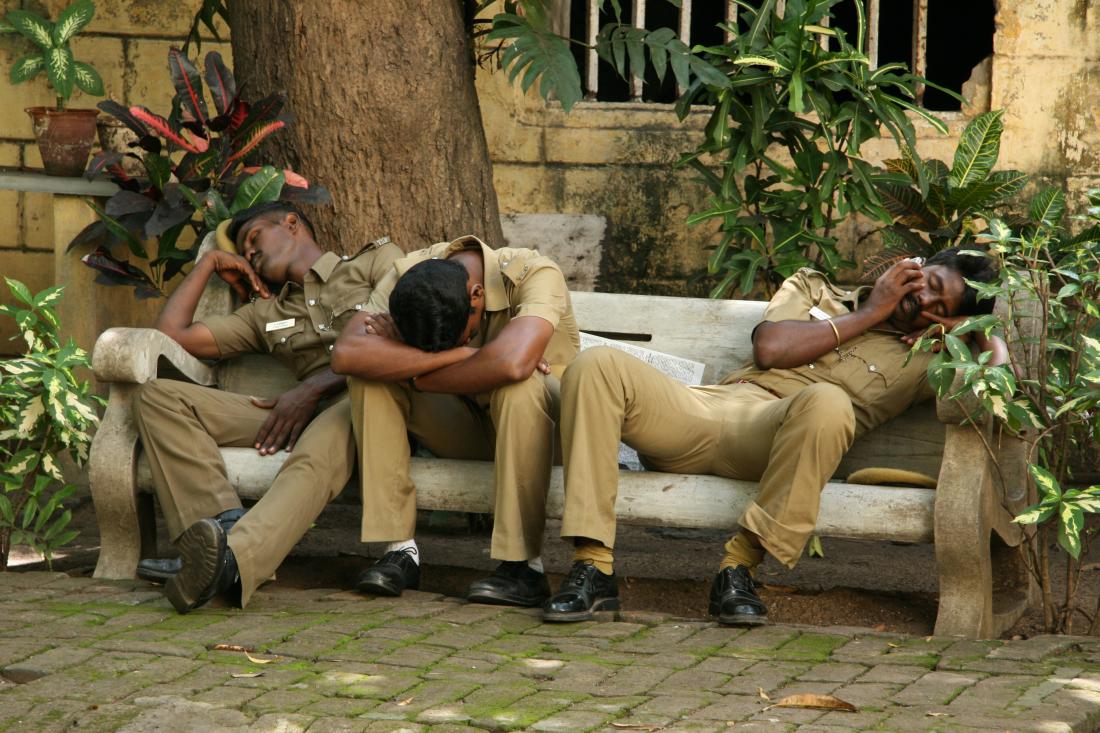 Researchers conducted a randomized evaluation to study the impact of providing information and encouragement, improving sleep conditions, and in some cases providing financial incentives on workers’ sleep duration and consequent cognition, well-being, productivity, labor supply, and earnings. Researchers recruited about 450 Indian workers from low-income neighborhoods in Chennai for a one-month data entry job with flexible hours and randomly assigned them to one of the following three groups:

Additionally, a random subset of participants from the three groups were given the opportunity to take a daily half-hour nap in private, quiet, and gender-separated areas at their workplace. Each nap space included a bed, blanket, pillow, table fan, ear plugs, and eye shades.

To capture reliable and objective measures of sleep, all participants wore actigraphs—wristbands inferring sleep/wake states based on body movements—continuously throughout the study. The researchers were able to measure labor supply, productivity, and earnings through participants’ performance and time spent working at the data entry job. Participants were paid for time spent typing as well as the amount of data entered. Labor supply was measured through active typing time accounting for short breaks during the workday. Changes in psychological well-being were measured through questions about happiness, sense of life possibilities, depression, life satisfaction, and stress. Physical health outcomes were measured through blood pressure, self-reported pain, self-reported illnesses, activities of daily living, and performance on a stationary biking task.

Providing information and encouragement, improvements to home sleep environments, and in some cases financial incentives increased sleep duration but had no impact on productivity, earnings, decision-making, or well-being. In contrast, providing short afternoon naps at the workplace resulted in increases in cognition, productivity, and psychological well-being.

Impact on sleep: The two night-sleep interventions increased night sleep by 27 minutes per night on average by inducing more time spent in bed (on average 38 more minutes). The average amount of night sleep in the comparison group was 5 hours and 37 minutes for eight hours spent in bed. Additionally, short afternoon naps at the workplace were effective in increasing participants’ daytime sleep. However, the quality of nap sleep in the office appeared to be higher than that of night sleep (85 percent versus 66 percent respectively). The average number of awakenings per minute of sleep achieved was lower for the office naps.

Impact of night-sleep interventions: Contrary to expert predictions and a large body of sleep research, increased nighttime sleep had no detectable effects on cognition, productivity, decision-making, or well-being, and led to small decreases in labor supply. Additionally, there was no impact on an index of laboratory measures of attention, memory, and cognitive function.

Impact of naps: Participants who took naps were 2.3 percent more productive than workers who didn’t receive the opportunity to nap at work.  Sleep is what drives the positive effect of naps, rather than simply taking a break from work or resting. Indeed, compared to taking a break, naps increased overall earnings by 4.1 percent per day, or INR 11 (about US$0.05).  Naps also improved cognition, attention, happiness, life satisfaction, and sense of life possibility.

Overall, the opportunity to take a daytime nap improved a range of economic and well-being outcomes while interventions that increased nighttime sleep through devices, encouragement, or financial incentives had no such effect. Researchers suggest that the low quality of sleep observed in Chennai may explain the lack of benefits of increased nighttime sleep. Improving sleep efficiency may require more substantial interventions, including ways to overcome barriers to sleep—such as mosquitoes, crowding, or psychological distress—that remained unaddressed by the intervention. More systematic research on sleep in low- and middle-income countries is needed to better understand and address the long-run impact of sleep deprivation on the lives of workers in urban settings.