Many urban areas in developing countries lack basic services such as piped water, electricity, sewage lines, and paved roads. Researchers analyzed the effect of paving streets in residential areas in Mexico on the living standards of adjacent households. Street paving increased property values, allowing households to purchase more home appliances and vehicles and to invest in home improvements. A cost-benefit analysis suggests that the economic returns to paving streets outweighed the construction costs.

Many developing countries are rapidly urbanizing, but a large portion of the urban poor lives in marginalized neighborhoods that lack access to basic urban services such as running water, electricity, sewage systems, and paved roads. Governments may be less likely to invest in infrastructure projects in these areas for both political and economic reasons: low-income residents may not have the political power to lobby for infrastructure improvements, and politicians may prefer to invest in central business districts, where they believe such projects are more likely to attract businesses and spur economic growth.

Improving infrastructure in low income-neighborhoods could have dramatic effects on living conditions for the urban poor. For instance, asphalting currently unpaved roads might increase property values and reduce the time and cost of traveling within the neighborhood or to the city center. However, there is relatively little research measuring the effects of public infrastructure investments on the lives of the poor.

Acayucan is one of Mexico's 56 metropolitan areas, encompassing three municipalities that had a combined population of 105,000 in 2007. Like many cities in Mexico and throughout Latin America, the city has a central core, with paved streets. Low-income neighborhoods lie in the outskirts of the city and the local government has paved streets in these neighborhoods a few sections at a time. In Mexico, municipal governments are responsible for most elements of their urban infrastructure, but the municipal budget is primarily funded by federal taxes, with less than 10 percent derived from local taxes (consisting of the property tax and business-permit fees). 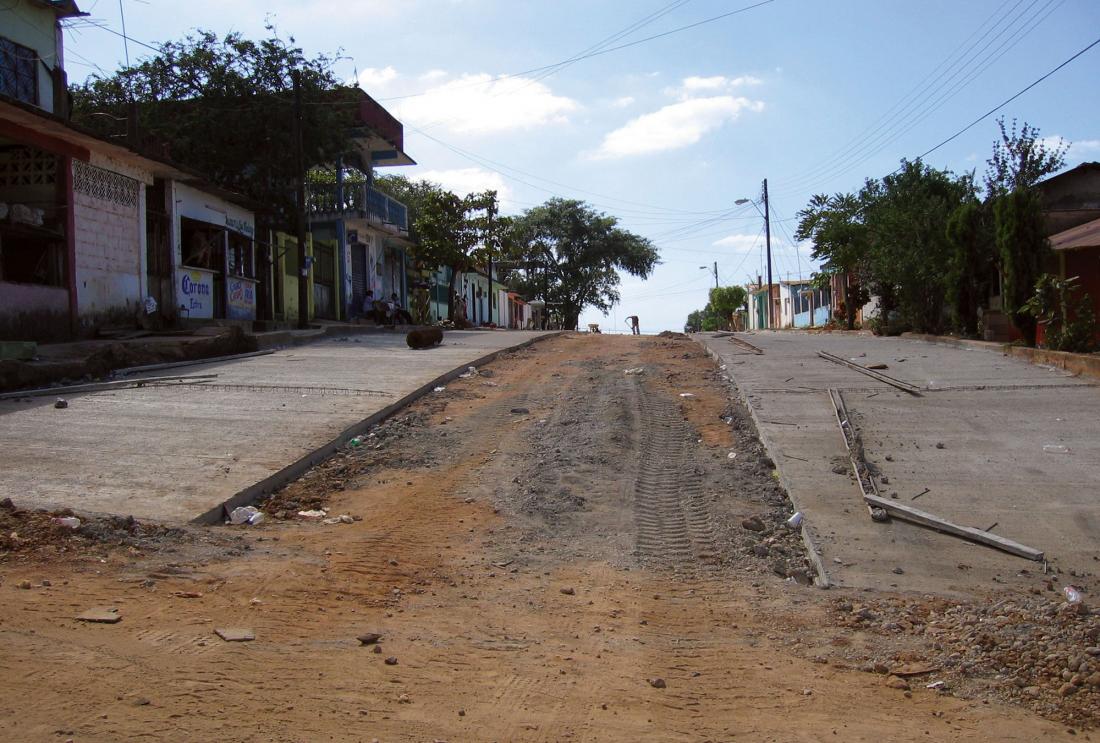 From 2006 to 2009, researchers partnered with the government of Acayucan, Mexico to conduct a randomized evaluation to measure the impact of a set of street pavement projects on the living standards of local inhabitants. The city of Acayucan gradually expanded its pavement grid over time via “street asphalting projects,” each defined as a contiguous set of unpaved street segments connecting to the existing pavement grid. In 2006, the government of Acayucan faced budget and temporal constraints that did not allow it to pave all streets that were deemed suitable candidates and so decided to randomly select half of the 56 candidate streets to be paved.

The intervention consisted of the first-time asphalting of residential non-arterial streets, varying in width from 8-15 meters, with two lanes of vehicle traffic and one or two lanes of parking. As with most infrastructure projects, the majority of the costs were borne up-front: the estimated annual maintenance costs were only 1.5 percent of construction costs. After a street was paved, maintenance became a municipal responsibility funded by general revenues.

According to a professional appraiser, properties on paved roads were worth 17 percent more than an average value of MXN 100,710 (US$6,898) for properties on roads that remained unpaved. According to homeowners’ estimates, these properties were worth 28 percent more than the average of MXN 164,391 (US$11,260) in the comparison group. While homeowners1 overestimated property values and the value gained compared to the professional appraiser, both measures indicate that pavement increased property values in a tangible way. Land values and rents were also higher on paved streets.

On average, these households had 2.63 appliances out of a list of six common household appliances (refrigerator, washing machine, microwave, air conditioner, video player, and computer), compared to 2.36 appliances in the comparison group. They had an average of 0.35 motor vehicles (cars, trucks, and motorcycles), compared to 0.25 vehicles among households on unpaved streets. They also conducted an average of 0.82 home improvements (such as improvements in flooring, walls, roofing, sewerage connection, plumbing, toilets, electrical installations, room construction, remodeling, security measures, and house façade), an increase from 0.4 improvements.

There were no statistically significant effects on transportation costs, hours worked, or earnings.

The street pavement program did not reduce the time or cost of traveling to the city center in a meaningful way, which might have allowed households to earn more. Furthermore, there were no effects on school attendance or health.

How did households finance additional purchases? Although incomes did not change significantly over the course of the study, households on paved streets were more likely to use formal, collateralized credit2 and took out larger loans.

Households on paved streets were 2.8 percentage points more likely to use formal credit (compared to 1.8 percent of households on unpaved streets), and their average loan balances were ten times larger. As the increases in appliances, vehicles, and home improvements were concentrated among households already using formal credit before the program, there was little evidence suggesting that the street paving program made banks more willing to lend to households. Rather, the results suggest that increases in property wealth—often the largest source of wealth for homeowners—made households more comfortable using credit to finance purchases of appliances, vehicles, and home improvements that raised their standard of living.

Road construction costs were approximately equal to the increases in property values.

The municipality reported that the total cost of paving the streets was MXN 11,304,642 (US$774,291). The total gain in property values was MXN 12,275,585 (US$840,793), which is an underestimate of the benefits as it does not include gains to people who use the newly paved streets but do not live on them. This ratio of benefits to costs—1.09 to one—is considered a favorable ratio for government-provided public goods.

Street pavement may be an effective way to raise standards of living for homeowners in poor, urban neighborhoods.

In Acayucan, Mexico, paving streets increased property values by 17 percent. Within two years, residents were able to transform their increased property values into increases in household appliances and motor vehicles, as well as make more home improvements. They also felt comfortable taking out larger loans to finance these purchases. This study is the first to link public infrastructure projects with tangible improvements in standards of living in marginalized neighborhoods.

Improving roads can be a fiscally sound use of public funds.

Roads and other infrastructure projects are public goods—many people use them but individuals do not have incentives to develop or maintain them on their own—so providing them is often a government role. Governments aim to carry out projects where the benefits to citizens are at least as large as the costs, and a conservative costbenefit estimate of this set of projects suggests that road construction costs were approximately equal to the increases in property values. This estimate does not account for benefits to people who use the newly paved roads but do not live on them. Furthermore, while road construction projects require large initial investments, maintenance costs are generally low, and citizens continue to enjoy the benefits for many years.

In making budget decisions, governments should take into account that infrastructure projects may have benefits beyond the visible physical improvements.

The trend toward greater government spending on social programs such as conditional cash transfers sometimes comes at the cost of investment in infrastructure. There are numerous studies showing the benefits of some of these social protection programs but far fewer examining the impacts of more traditional infrastructure projects. With this new evidence on street paving, policymakers can view infrastructure development as an effective approach to raising households’ living standards and consider these benefits in deciding how best to use government funds.

Gonzalez-Navarro, Marco, and Climent Quintana-Domeque. 2016. "Paving Streets for the Poor: Experimental Analysis of Infrastructure Effects." The Review of Economics and Statistics 98(2).

1.
Approximately 95 percent of residents were homeowners.
2.
Banks in Acayucan offered home equity loans, which allowed homeowners to borrow up to 50 percent of the assessed property value of their home, using the property as collateral. For the purposes of this study, the authors defined “formal credit” to include home equity loans as well as mortgages and other collateralized bank loans.

2 result(s)
Paving roads could be one path to reduce urban poverty in the developing world
A Simple Way to Reduce Urban Poverty: Pave Streets