Voter identification (ID) laws currently exist in the majority of states in the United States. Advocates see them as necessary to ensure electoral integrity, while critics believe they serve as unnecessary deterrents, dissuading some would-be voters from submitting their ballots. To add evidence to this polarizing and often politicized debate, researchers evaluated the effect of sending various postcards describing relevant voter ID requirements to different voters in Tennessee and Virginia. They found that notifying voters of the ID requirements did not negatively affect turnout, and certain messaging actually increased turnout by as much as 1.5 percentage points.

In the past decade, many states across the United States have adopted voter identification laws. These laws require eligible voters to present proof of identity and address prior to casting a vote in any state or national election. The majority of states currently enforce various voter ID laws. Despite extensive evidence that voter fraud is extremely rare1, advocates laud voter ID laws as safeguards for electoral integrity, reducing the risk of voter fraud or misrepresentation. Critics purport that such legislation creates an unnecessary hurdle for already marginalized sub-sets of voters, particularly since voters must show identification in order to register. Obtaining identification may be time-consuming and confusing even in states that make voting IDs available for free. Would-be voters may be dissuaded by compliance costs, founded or unfounded fears of voter fraud, and unclear processes to obtain proper identification. Proponents and opponents are often divided along political and ideological lines, and little rigorous research has examined whether notifying voters about ID requirements influences turnout and, if so, which communication methods have the largest influence.

Following general elections in 2010, Tennessee and Virginia both introduced strict voter ID requirements. Voters who did not present proper ID would be disqualified from voting. Tennessee requires photo identification, while Virginia accepts other proof of identity and address, such as social security cards, utility bills, or paychecks. Some forms of identification may be time-consuming or difficult for some citizens to obtain. For example, in Tennessee, obtaining a free photo ID card requires visiting a Department of Motor Vehicles office with a birth certificate and proof of address.

Both along their shared border and a shared Interstate-81 highway corridor, the two states' populations are demographically similar. Across both states, around 70 percent of citizens are white, over 80 percent completed high school, the average household income is around $50,000, and voted similarly in the 2008 presidential election.

Along the highway corridor, specifically, researchers focused their study on Black populations in the cities of Knoxville, Tennessee and Roanoke, Virginia. In these cities, Black people comprised around one-quarter of the entire population, households, on average, earned less than the rest of the state (around $35,000), and a relatively higher proportion of the population voted for the Democratic party in the 2008 presidential election, compared to each state' s respective voting record. 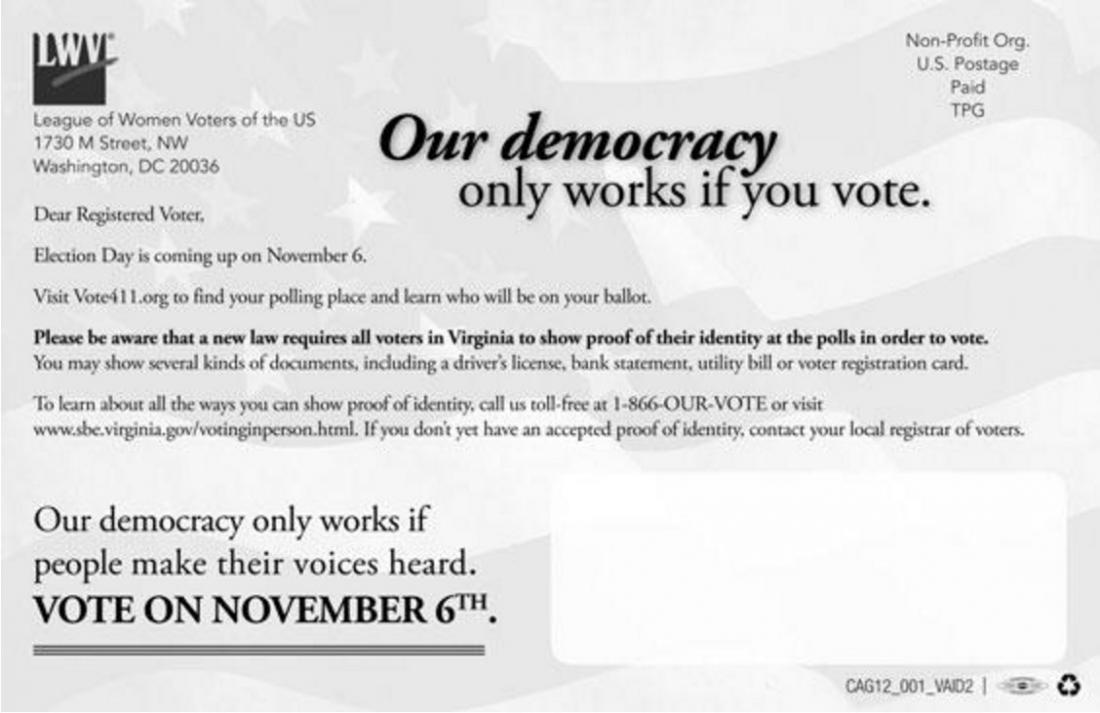 Researchers conducted a randomized evaluation to test the impact of various direct mail campaigns to notify voters of new ID requirements on voter turnout. In partnership with the League of Women Voters, a nonpartisan organization with a strong history of voter mobilization, researchers sent election notification postcards to registered voters in Knoxville, Tennessee, Roanoke, Virginia, and along the Tennessee-Virginia border.

Of a total 45,408 individuals, researchers randomly assigned 55 percent to receive postcards (the treatment group) and 45 percent to serve as the control group. For those receiving postcards:

Following the 2012 election, researchers collected voter turnout information from each sampled jurisdiction to compare the effect of various voter notifications (or lack thereof) on turnout across each sample group in Tennessee and Virginia.

Researchers found that notifications about voter ID requirements did not negatively impact voter turnout, and may have actually increased turnout.

They focused their findings on low-propensity voters by excluding anyone who voted in both the 2008 and 2010 general elections. Across the study sample, the "help" reminder was the only notification that had any significant effect on voter turnout, increasing turnout 0.9 percentage points to 40.9 percent. Additionally, there is some evidence that the "help" reminder increased turnout rates of treatment group household members to whom the postcard was not addressed. Among this non-addressee treatment population, turnout rates increased 1.0 percentage points to 46.2 percent.

In Tennessee, the "warning" note increased turnout 1.5 percentage points to 33.4 percent, potentially suggesting that warning messages may be more effective where ID laws are more stringent.

Rather than confirm or reject any single theory on the effect of voter ID laws and notifications on voter turnout, these findings suggest the need for additional replication in other regions and electoral settings. Given that different notification types may impact voter turnout in different ways, further research in to the effects of different messaging could help inform government officials' decisions on what type of notifications should accompany voter ID laws to ensure they do not discourage voting.