Farmers and the fear of crime: Improving agricultural productivity through farm protection in Kenya

In states with a weak rule of law, the fear of crime can alter farmers’ production decisions and impose substantial costs to avoid increasing the risk of theft. In Kenya, researchers matched farmers with subsidized, trained watchmen to evaluate the effect of improved farm security on farmers’ decision-making, agricultural productivity, and conflict with neighbors. Security was shown to increase and in response, farmers made different cropping, time use, and investment decisions, had higher agricultural yields, and experienced less conflict with their neighbors. Further, farm theft within villages hosting watchmen was reduced even on farms without watchmen, with no evidence that crime shifted into nearby villages.

In states with a weak rule of law, the fear of crime can alter individual and firm-level production decisions. For farmers, this can mean planting crops with a lower theft risk or spending more time guarding crops for security instead of using that time for other productive activities. Improved farm protection could influence farmers’ cropping decisions, time use, investments in land improvements, and agricultural productivity according to the broader literature on property rights and crime.1 2 3 Greater farm security could also impact social relationships by reducing grievances, conflict, and suspicion between farmers and neighbors. Could providing farm protection through security guards (or “watchmen”) lead to more productive agricultural behaviors, all while reducing farmers’ disputes with their neighbors?

In rural Migori County, Kenya, where the evaluation took place, small-scale subsistence agriculture is the primary economic activity. Most farmers grow maize, beans, and cassava, and crops are consumed locally by households. Other, more profitable crops, like tomatoes, are rarely grown, leaving opportunities to increase profits by adopting new crops. In the cases where crops are sold rather than consumed, farmers tend to sell products directly from their farms, even though they could receive higher prices from travelling to sell at local markets.

Farmers’ cropping decisions and their choices not to leave farms unguarded to visit markets reflect their security concerns. Migori farms are not well-secured by fences or other means, and opportunistic theft from within villages is a salient perceived fear. Further, farmers are largely unable to secure their property rights or punish thieves because local institutions are ineffective, thieves are difficult for farmers to identify, and there is a perceived social cost from reporting another villager for theft. This has caused unaddressed grievances, and related disputes among neighbors are common.

Farmers correctly believe that valuable crops, easily picked crops, crops with longer harvest windows, and crops available for harvesting before the main staple (maize) are more likely to be targeted by thieves. Farmers also perceive theft to be targeted towards those who undertake new or different activities, constraining farmers’ willingness to experiment with or adopt new technology including potentially more profitable crops. 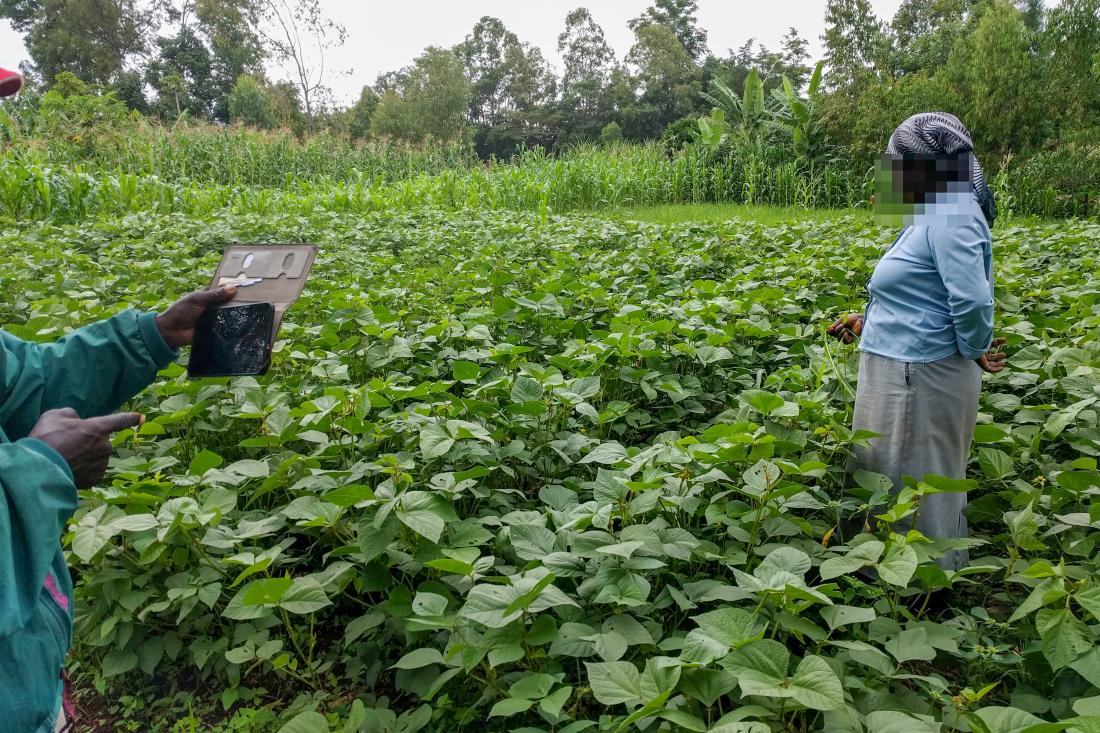 Researchers conducted a randomized evaluation to test the impact of matching farming households to subsidized, trained watchmen on farmers’ decision-making, perceived security, and conflict with neighbors during the 2018-2019 farming season.

From 76 villages, researchers recruited 585 farmers through the Kenyan Agricultural and Livestock Research Organization (KARLO) network, which has relationships with local farming groups. Some villages were randomly assigned to receive watchmen and others to serve as comparison villages. The watchmen were all from the Maasai ethnic group and were recruited from Maasailand. In Migori, Maasai were perceived as particularly effective guards partly because they were not local to the Migori farming communities, limiting fears that watchmen would collude with potential thieves or avoid confronting thieves due to the social cost. Additionally, ethnic stereotypes around Maasai pastoralist traditions boosted perceived effectiveness, making the watchmen a reasonable security intervention without some of the complexities of other interventions, such as fencing which requires clear land ownership boundaries. Groups in Migori and Maasailand were also politically aligned, did not share ethnic hostilities, and were in close enough proximity that watchmen could be feasibly transported to Migori farms.

Two months before planting season, farmers from the villages assigned watchmen received three separate calls informing them that they were matched with a subsidized watchman they could hire and that the watchman was strictly for security work. This allowed for enough advance notice that famers could potentially change their cropping decisions in response to the opportunity.

The watchmen increased security and, in response, the matched farmers changed their cropping decisions, spent more time off the farm, had higher agricultural yields, and experienced less conflict with their neighbors. Further, farm theft within villages hosting watchmen fell even on farms without watchmen, with no evidence that crime shifted into nearby villages.

The opportunity to hire watchmen was well-received. Of the matched farmers, 87 percent chose to hire a watchman at the subsidized rate. Fifteen percent of the non-matched farmers in the comparison group managed to hire a watchman during the study, usually after seeing the effectiveness of watchmen on other farms, despite none of these farmers hiring watchmen in the prior season. Further, being matched with a watchman or observing someone else with one increased how farmers valued security, with matched farmers reporting that security was more effective than previously expected.

Improved security allowed farmers to adjust their cropping, time use, and investment decisions. Matched farmers were 13.9 percentage points (77 percent) more likely to report that they grew a new crop for the first time or expanded the planting area of a previously grown crop due to improved security. During the study period, the matched farmers were 11.5 percentage points (61 percent) more likely to have bought farm assets, with some evidence suggesting this change stemmed from unexpected yield increases and future plans to hire security, which reduced the perceived risk of owning valuable assets. The matched farmers also spent more time off the farm and sold more crops at off-farm markets than in prior years.

The changes in farmers’ production decisions led to more valuable agricultural yields. The total income per acre from agricultural production was 15 percent (5002 KES or about US$50) higher for matched farmers than non-matched farmers. This change was driven by a substantial increase in the value per acre of less-theft prone crops, likely because with farm security, farmers could spend less time protecting crops at risk of theft and more time tending less-theft prone crops, increasing yields.

The watchmen reduced disputes between matched farmers and their neighbors. In the last month before harvest, matched farmers recorded about 60 percent fewer disputes over farm interference with their neighbors and a similar reduction in the number of disputes involving threats or aggression, from an average in the comparison group of one dispute or 0.61 angry disputes. Matched farmers were also less suspicious that neighbors or strangers might steal from their farm while they were away and were nearly half as likely to have unexpressed grievances.

The security of matched farmers’ neighbors increased, without pushing crime into other villages. There was no evidence of crime shifting between villages or changes in perceived farm security from being in a comparison village near to villages assigned watchmen, suggesting criminal activity was not reduced in one area by pushing the activity into nearby areas. Further, a second sample of 65 farmers geographically close to the original participating farmers found that new farmers near to matched farmers were less likely to report any farm theft during the study period and more likely to believe theft had decreased from the prior year compared to those living near unmatched farmers.

A cost-benefit analysis found that the individual costs to farmers exceed their personal benefits. The costs to farmers from hiring a watchman outweighed the increase in agricultural production value and reduction in disputes. However, this individual-level cost-benefit analysis does not account for the positive security effects for nearby farms. This suggests that it may be preferable for policy interventions to improve farm security on a collective, rather than individual, basis.