As the coronavirus pandemic spread around the world in 2020, countries instituted measures to stop the spread of the virus and to replace lost income from shutdown orders and the broader economic contraction. Researchers conducted a randomized evaluation to test the impact of providing cash transfers to female entrepreneurs during the pandemic on their business outcomes and behavior. Firm profit, inventory spending, and food expenditures all increased for business owners that received the cash transfer. Additionally, the transfers caused a re-opening of previously closed businesses; however, PPE spending and precautionary management practices only increased among those who perceived Covid-19 as a major health risk.

As the coronavirus pandemic spread around the world in 2020, countries instituted measures to stop the spread of the virus and to replace lost income from shutdown orders and the broader economic contraction. Small businesses were particularly vulnerable to these Covid-19 shocks. In addition to making up the majority of employment in many low- and middle-income countries, these firms tend to rely heavily on face-to-face interactions and to operate in “non-essential” sectors affected by lockdown restrictions. Further, many small business owners lack the savings to sustain their businesses for weeks or months without working. Additionally, female entrepreneurs may bear the brunt of the economic impact, as women tend to earn less, have fewer savings, have less access to social protections, make up the majority of single-parent households, and are more likely to be burdened with unpaid care and domestic work.1

In response to the pandemic, many governments around the world implemented short-term unconditional cash transfers as a critical assistance tool. As of September 2020, 156 countries had initiated some form of cash transfers to combat the Covid-19 crisis.2  However, limited rigorous evidence exists on the effectiveness of these programs, particularly on the effects of one-off emergency cash transfers on small businesses and entrepreneurs.3

Dandora is a dense informal settlement in Nairobi, Kenya, with 150,000 residents. It is the site of a thirty-acre trash dump that services all of Nairobi, despite having been declared full in 2001, and its pollution plays a major role in poor health and respiratory issues among its residents. This, along with the density of Dandora and surrounding areas, led to substantial anxiety that Covid-19 would spread quickly among its residents. In response to the first confirmed case in Kenya on March 13, 2020, the government instituted a series of measures designed to limit personal interactions, including a curfew and travel ban.

In Dandora, women make up about 70 percent of entrepreneurs but their businesses are substantially less profitable than those run by men. Amongst the Dandoran women who participated in this evaluation, average profit was about US$2 per day in January, but fell to about US$1 per day by May following the emergence of Covid-19 cases and subsequent government lockdowns. Additionally, 18 percent of the women had closed their businesses between January and May 2020, at least temporarily, while 47 percent expected the Covid-19 crisis to shut down their business at some point at least temporarily.

While the Government of Kenya implemented a number of policies designed to partially stabilize incomes and reduce health risk, only 17 percent of business owners in this study had received any government relief by May 2020, as the relief primarily catered to the formal economy (i.e. through tax cuts and formal loan protections). Additionally, there was minimal NGO reach into Dandora, with only 5 percent of the study sample having received help from an NGO.

Finally, nearly all of the female entrepreneurs in this evaluation had access to M-PESA—a mobile banking service that allows users to store and transfer money through their mobile phones. 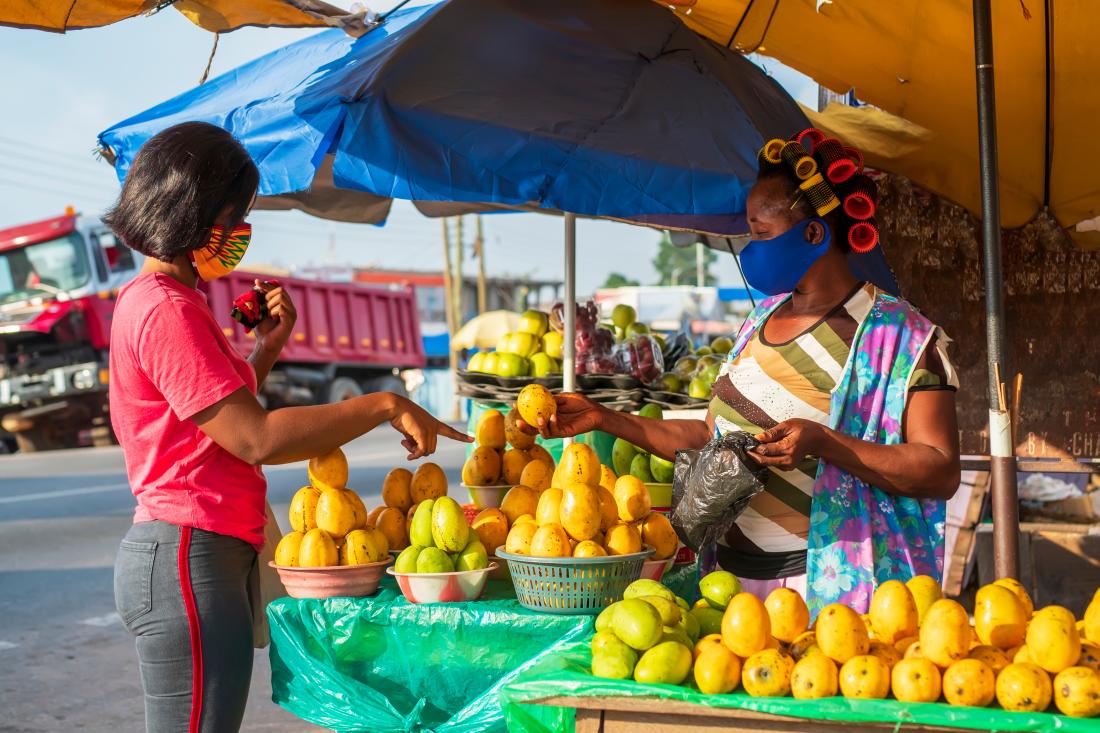 A woman sells fruit to another woman at a market stand during the Covid-19 pandemic.
Photo: Shutterstock

Researchers conducted a randomized evaluation to test the impact of providing cash grants to female entrepreneurs on their behaviors and business outcomes during Covid-19.

Researchers randomly selected 753 female microenterprise owners in Dandora to participate in the evaluation. About half (367) were randomly assigned to receive a one-time cash transfer worth 5,000 shillings (approximately US$50 in 2020), equal to one month’s average income. The other half (386) served as the comparison group, receiving 500 shillings (about US$5) for participating in the study. The cash transfers were delivered using M-PESA in May 2020, immediately preceding a period of high growth in cases of Covid-19 in Kenya.

Researchers utilized a survey they had collected in January 2020 for a separate project to understand key outcomes about the female entrepreneurs before Covid-19 hit and the economic contraction began, including business outcomes like average profits. Additionally, they gathered information on the entrepreneurs’ behavior, including the time spent working during the crisis, spending on personal protective equipment (PPE), and precautionary management practices from April through August through phone surveys. They also tracked business outcomes, such as profits, revenues, inventory spending, and closures.

Business operation: The cash transfers induced businesses to operate more intensively; firms that received the transfer were 5 percentage points more likely to be open relative to the comparison group, where about 83 percent of firms were open. Firms were also open 0.55 hours more per day than firms in the comparison group, which operated for an average of 6.9 hours. This was driven by a massive re-entry of firms that had been closed; a firm that had temporarily closed was 65 percentage points more likely to be open if they had received a cash transfer.

Covid-19 mitigation practices: The cash transfers caused PPE spending to increase by more than 22 percent on average relative to the comparison group’s average of 204 shillings per week (US$1.87), and caused an index of management safety practices to increase by 0.24 standard deviations compared to the baseline mean.  However, this effect was not universal; business owners who believed the mortality of Covid-19 was no greater than the seasonal flu practiced fewer preventative practices relative to the comparison group.

While this study shows one-off cash transfers during a crisis have the intended effect of helping people maintain their livelihoods, caution is warranted as the increased likelihood of resumed business activity may conflict with public health recommendations. Since beliefs played an important role in affecting Covid-19 mitigation efforts in this setting, researchers suggest there may be an important role for public health information campaigns to be used in tandem with cash transfers.