A large body of evidence shows that individuals can learn from their peers across many domains, including in agriculture where influential farmers communicate information about new technologies to others in their social networks. In Bangladesh, researchers conducted a randomized evaluation to test whether helping selected farmers set up demonstration plots could increase awareness in the community about a new rice variety by triggering information exchanges through new interactions. Demonstration plots comparing new versus traditional seed varieties improved farmers’ knowledge about the new rice variety. The new interactions induced by the demonstration plots were most effective for farmers who were least socially connected before the intervention was delivered.

A large body of evidence shows that individuals learn from their peers across many domains, including in agriculture where influential farmers communicate information about new technologies to others in their social networks. This literature finds that there are high returns to identifying the most effective “entry-points” to spread such information. However, this can require costly data collection to fully map social networks within communities. An alternative approach is to encourage the exchange of information among individuals, irrespective of social ties, by signaling the availability of information. To test this approach, researchers evaluated the impact of setting up agricultural demonstration plots, whereby farmers planted a new rice variety alongside an existing traditional variety, thus indicating that they have useful information about new varieties.

The study focused on farmers cultivating rice in the 2015 crop cycle in Bangladesh, spread across 256 villages in the Rajshahi Division. Rice cultivation in Bangladesh occurs in two seasons – the Aman season, which lasts from June/July to October/November, and the Boro season, which lasts from December/January to April/May. In the months between these two seasons, some farmers also grow wheat, potatoes, or pulses (also known as Rabi crop). At the start of the evaluation, around 35 percent of farmers only grew rice, and the average rice field size was 1.33 acres.

The Department of Agricultural Extension of Bangladesh provided consultation on which sub-districts were suitable for a new, shorter-duration rice variety called BD56. BD56 reaches maturation 25 days before the other rice varieties planted in the area. This feature allows farmers to plant and harvest an additional crop (Rabi crop) between the two rice seasons. BD56 can be profitable for farmers who take advantage of the shorter maturation period to grow an additional crop. 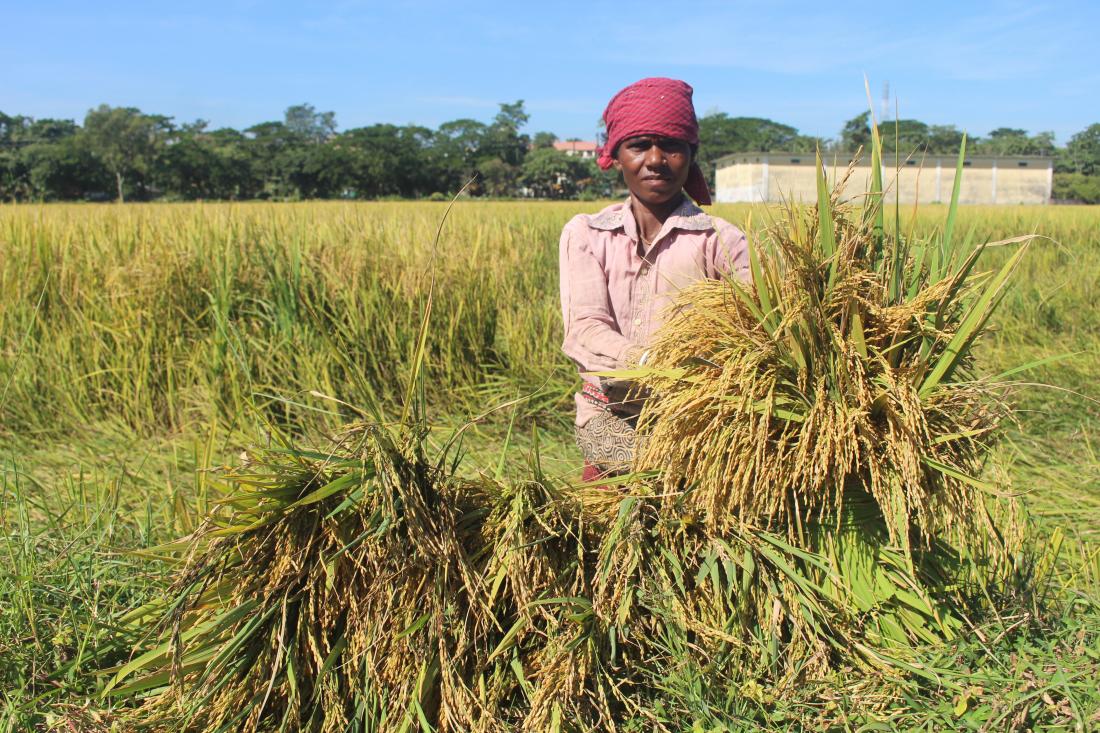 In Bangladesh, researchers conducted a randomized evaluation to test whether helping selected farmers set up demonstration plots could increase awareness in the community about a new rice variety by triggering information exchanges through new interactions.

First, the researchers introduced mini-kits with 5 kilograms of the new rice variety to five farmers in 192 villages, referred to as “entry points.” Villages were randomized into to one of three methods for selecting these entry-point farmers:

Next, in 32 out of the 64 villages assigned to a particular “entry-point” selection method, researchers helped farmers set up demonstration plots. This involved cultivating BD56 alongside another rice variety of the farmers’ choosing, and placing two signs in their fields to highlight which variety was which, making the comparison of growth between varieties salient for onlookers. Non-demonstration plots only placed one sign highlighting the BD56 variety. The demonstration plots aimed to improve information diffusion by triggering the interest of other farmers, and inducing communication beyond existing social network connections, either by capturing farmers’ attention, or by providing a signal to “entry-points” to deliver more information to other farmers in the network.

To identify the incidence of benefits of the new technology, 64 villages were assigned to the comparison group. Up to fifteen farmers in each village received a long-duration rice variety (BD51), with five farmers selected by each of the three selection criteria described above.

Researchers also investigated whether information diffusion strategies supported farmers who were more or less likely to benefit from the technology. Using villages in the comparison group, researchers identified that the main benefit was planting a second crop between the two rice growing seasons. They use a machine learning algorithm to estimate which farmers are most likely to benefit from BD56 by increasing cropping intensity.

The study began in March 2016, and the seed distribution was conducted in June 2016. In April 2017, researchers measured the extent of information diffusion in all intervention villages by randomly selecting ten additional farmers to ascertain their level of knowledge about the new seed variety. To understand the diffusion of BD56 usage, researchers recorded seed sales when the seeds were offered at subsidized prices in 168 intervention villages. Through a series of surveys with “entry-points” in all villages, researchers also estimated the impact of BD56 on agricultural practices, cropping intensity, and annual income.

Researchers found that demonstration plots comparing new versus traditional seed varieties improved farmers’ knowledge about the new rice variety. The new interactions induced by the demonstration plots were most effective for farmers who were least socially connected before the intervention was delivered.

Effectiveness of influential “entry-points:”  Demonstration plots had similar impacts on knowledge diffusion compared to selecting influential “entry-points.” Using large farmers as “entry-points” increased awareness about BD56 by 7.4 percentage points (12.3 percent), and using farmers selected by extension officers increased awareness by 6.7 percentage points (11.2 percent).   “Entry-points” were found to be more central in village networks than randomly selected farmers. Farmers selected by agricultural extension officers had 8.14 connections with other farmers in the village, and large farmers had 9.04 connections on average, whereas randomly selected farmers only had 4.6 connections on average. Most importantly, the researchers found that demonstration plots, when cultivated by randomly selected farmers, also led to an increase in knowledge about BD56 by 7.2 percentage points (12 percent).

In contrast, the researchers show that the effectiveness of selected “entry-points” appeared to be rooted in their ability to diffuse information via existing network links.

Effects on farmers with higher likelihood of benefits of the new technology: Diffusion through demonstration plots and selected entry points had benefits for the farmers expected to benefit the least from the new technology. Using the machine-learning based predicted benefit index, researchers found suggestive evidence that both demonstration plots and the selection interventions only increased knowledge for farmers that were less likely to capitalize on the main benefit of BD56 if adopting.

Take-up and changes in cultivation practices: There was no difference in the adoption of BD56 seeds between the intervention and comparison groups. Even across villages by different types of “entry-points,” the adoption rates remained consistent, through larger farmers who also developed demonstration plots were more likely to adopt BD56. Researchers also noticed a change in cropping patterns. Farmers who planted BD56 used the additional month between the two crops were 27.8 percentage points more likely to sow Rabi crops than farmers who planted BD51. Farmers with BD56 seeds who also planted an additional Rabi crop witnessed an increase in profits by 5,241 taka (US$ 61.81 at 2020 prices), as opposed to an average gain in profit from Rabi cultivation of 1,436 taka (US$ 16.94 at 2020 prices), suggesting that the technology was not profitable on average as some farmers did not use its main benefits.

Taken together, this research suggests that demonstration plots are an effective way to encourage the spread of information about new technologies in agriculture because they can trigger new interactions and conversations between farmers that may not belong to the same social network. This stands in contrast to more traditional models of diffusion that rely on farmers’ underlying or pre-existing social network. Policymakers should consider methods like demonstration plots to diffuse information to farmers because they provide an alternative to traditional policies.