Women’s labor force participation is low in many countries, including in India, where it has been falling in recent years. Researchers worked with local banks and the state government of Madhya Pradesh to provide women with their own bank accounts, training on how to use them, and direct deposit of wages earned through the Mahatma Gandhi National Rural Employment Guarantee Scheme (MGNREGS) to measure the impact of increased financial control on women’s labor supply, their bargaining positions in their households, and community gender norms. Relative to just providing bank accounts, additionally providing training and direct deposits changed gender norms: women worked outside the home more, had greater financial agency, and were more likely to approve of women working.

Madhya Pradesh is a relatively large and low-income state in India, with male and female labor force participation rates close to the national average. The researchers selected four northern districts of Madhya Pradesh for their relatively restrictive gender norms, as indicated by inequitable sex ratios and the low proportion of women who reported being allowed to travel outside their village alone.

India’s Mahatma Gandhi National Rural Employment Guarantee Scheme (MGNREGS) guarantees 100 days of wage labor each year to nearly 600 million people living in rural areas. MGNREGS is one of the primary avenues of employment for people living in rural areas, including women. When MGNREGS was introduced, wages were paid into one bank account per household, usually controlled by male family members.

At the start of this study, the Indian federal government was working to transition to a system in which MGNREGS wages were deposited directly into individual accounts. Simultaneously, the state government of Madhya Pradesh was investing in banking kiosks, meant to give every citizen easy access to banking services. While these interventions in theory enabled women to open bank accounts in their names, the programs did not sufficiently target women in Madhya Pradesh. In fact, for most of the study period, less than one-fifth of women in the study areas working through MGNREGS received payment directly to an account they owned.

Almost a quarter of women, and a third of men, in the study sample agreed with the statement that “women cannot go out to work.” On average, men in the study sample anticipated 56% of their community members would think they were a bad provider if their wives worked outside the home for pay. Importantly, a majority of married women in the studied village clusters stated their husband had the most say in whether they worked. 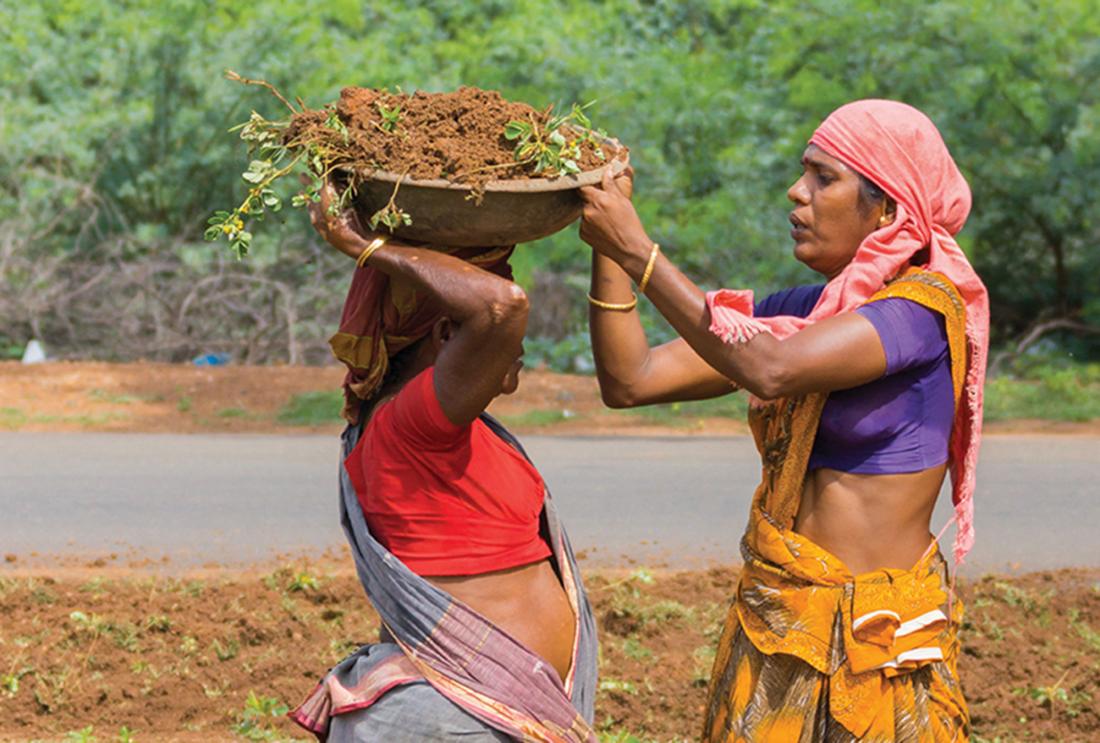 The researchers wanted to understand whether increasing women’s financial control would encourage more women to work outside the home for pay and the community to shift its norms around female labor force participation. They worked with the state government and local banks to build on ongoing national efforts to increase women’s access to wages earned through MGNREGS through personal bank accounts, direct wage deposits, and banking training. In the four study districts, the researchers identified 197 villages clusters with banking kiosks. They divided the village clusters into one comparison group and four treatment groups:

Researchers collected information on banking activities, labor market outcomes, own and perceived gender norms, and women’s empowerment. Data was collected during a baseline census in 2013 and 2014, as well as during a short-run survey in 2015 and a long-run survey in 2017, and from administrative records. To capture gender norms, the researchers asked participants about own norms—their personal beliefs—and perceived norms—how they thought people in their community would react to women’s labor market decisions. Researchers are collecting a follow-up survey in 2021, six years after the program ended, to measure how the program impacted labor market outcomes, attitudes towards women's work, and women's empowerment during and after Covid-19.

Women in the bank account, direct deposit, and training group worked more, had greater financial freedom, and expressed more progressive gender norms. Crucially, husbands were less likely to oppose women working for pay outside the home. Gains were largest among women who had not previously worked for MGNREGS.

Women in the bank account, direct deposit, and training group were more likely to work in both the private and public sectors. Consistent with the notion that women were prevented from working outside the home for pay by their husbands, women who had not previously worked for MGNREGS and whose husbands had more conservative views on women’s work saw a greater increase in public and private labor force participation than women who had previously worked for MGNREGS.

Women in the bank account, direct deposit, and training group had increased financial autonomy and knowledge as a result of the program. Three years after program implementation, among women who had received training and direct deposits to their bank accounts, the average total wage deposits were close to annual average wage earnings, or US$66 at the contemporary exchange rate. Assignment to the bank account, direct deposit, and training group resulted in a 0.12 standard deviation increase in a female banking autonomy index. The researchers interpret this as evidence that women’s household bargaining power could have increased. In line with women having greater control over household financial resources, men were also more likely to work in the public sector, suggesting that they were compensating for income now in the control of female household members.

The researchers note that the demonstrated impacts are concentrated among women who received both training and direct deposit in addition to bank account access, indicating that both financial knowledge and agency are needed to increase financial control.

Indian women have not benefitted from rural wage and labor market growth to the same extent that men have. The results of this study suggest that Indian women’s labor force participation has been limited by restrictive gender norms. Gender targeting can help programs like MGNREGS increase gender equity by providing women with greater control over economic resources. In some settings, such economic approaches may be less costly and simpler than programs that target norms directly, though more research on this is needed. Importantly, this economic programming has the potential to help the most marginalized women most.

2 result(s)
Getting India's women into the workforce: Time for a smart approach
Five key lessons about women and work in India