The Impact of Offering Free ATM Cards to Couples in Kenya

The transaction costs associated with opening, maintaining, and withdrawing funds may be a barrier to using formal savings accounts for low-income individuals. In partnership with Family Bank of Kenya, researchers evaluated the impact of providing free ATM card to couples on savings account use. Providing ATM cards significantly increased the use of savings accounts owned by men and joint accounts on average, but had no effect on accounts owned by women or men that had less bargaining power than their spouses. These results suggest that the ATM card, which increased account accessibility, also made accounts less attractive to individuals that used the to keep personal savings away from spouses with greater bargaining power, which disproportionately affected women.

Many efforts to increase access to formal savings accounts have focused on reducing transaction costs, or the fees associated with opening, maintaining, and using accounts, by offering free basic accounts or mobile money. However, reducing transaction costs may not beneficial for all individuals looking to save. For instance, commitment devices, which lock money away and make it costly to access, may be beneficial for individuals who face pressure to share resources with other household and community members. This is particularly relevant for households where one individual (often the husband) is the primary financial decision-maker and the other (often the wife) has more limited bargaining power. Can offering free ATM cards that reduce the transaction costs of savings accounts lead to lower account usage for individuals with low bargaining power?

The evaluation occurred in two communities surrounding the commercial trading center of Busia, Kenya between July and September 2009. Busia is well served by formal banks, with over six banks in the area during the time of the evaluation, including the Family Bank of Kenya, the partner for this evaluation. In 2009, the Family Bank of Kenya had over 600,000 customers, 50 branches, and KES 13 billion (US$167 million) in assets and served primarily low- and middle-income clients. Most Kenyan bank accounts at the time of the evaluation required account holders to maintain large minimum balances, around KES 1,000 or US$ 12.50, and often charged monthly fees. Conversely, all study participants were offered Family Bank’s new, low-cost account, which had no recurring or deposit fees and required a relatively low minimum balance of US$1.25. Withdrawal fees were US$0.78 without an ATM card and US$0.38 with an ATM card, with a fee of US$3.75 to acquire a card. Like most other basic accounts, this account did not pay interest.

Social norms of the area strongly reinforce the notion that men are the heads of the household, therefore the primary financial decision-makers. Only 8 percent of men and 19 percent of women in the sample stated that the wife makes most decisions about how to spend money. On average, women reported earning less than men: KES 814 (US$ 10) in the past week, while men reported earning KES 1,662 (US$21).  However, women in the region are economically active and often travel unsupervised.

Before the evaluation, almost all (98 percent) of the survey respondents reported using at least one saving device, most often saving at home or an informal savings group. Most participants, however, did not have a formal bank account, especially women, of whom 12 percent had an account compared to 32 percent of men. 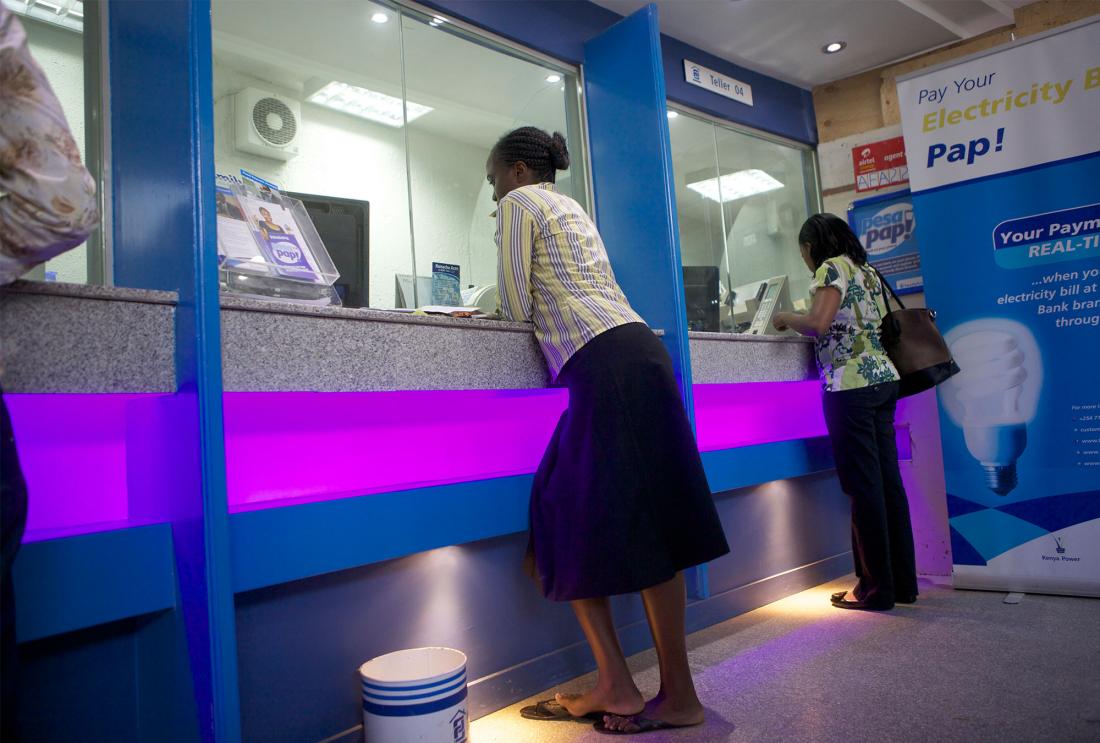 In partnership with Family Bank of Kenya, researchers evaluated the impact of providing ATM cards on savings account activity in Western Kenya. Researchers invited married couples, who did not already have an existing account with Family Bank and were interested in opening at least one account, to open a free basic account. Couples had the opportunity to open up to three accounts: a joint account, an individual account for the husband, and an individual account for the wife. The research team randomly offered different temporary six-month interest rates, which ranged from zero to 20 percent.

Altogether, a total of 749 couples opened 1,114 accounts. Around a quarter of the opened accounts were then randomly selected to receive a free ATM card. The ATM card aimed to reduce withdrawal fees and provide greater convenience by enabling withdrawals outside of bank hours. The research team surveyed couples to collect information on basic demographics, bargaining power in the household, income, savings practices, and preferences to wait to receive money over varying lengths of time. Each spouse was interviewed separately when couples visited the bank to open an account and then three years later. In addition, Family Bank provided administrative data on account use for the entire timeframe of the study.

Providing free ATM cards increased account usage only for joint and male-owned accounts. In contrast, there was no effect for women-owned accounts. This suggests that ATM cards, which increased account accessibility, also made accounts less attractive to individuals with lower bargaining power (mostly women) who used them to keep personal savings away from spouses with greater bargaining power.

When offered a free, basic savings account, all couples opened at least one bank account, but few used it. Of the total of 1,114 accounts opened, 44 percent were joint accounts and 56 percent were individual accounts. Couples most often opened either a single joint account (55 percent of couples) or two individual ones (30 percent of couples). Despite all couples opening an account, only 22 percent of these accounts were actively used, meaning the account received at least one deposit within the first six months after opening. After three years, almost all accounts were abandoned.

Offering a free ATM card increased the likelihood that couples used the account. Most couples did not purchase an ATM card on their own, so providing a free one greatly increased ATM card ownership. Offering a free ATM card increased the average number of transactions in the first six months from 0.8 to 1.4 and led to 2.1 more transactions over the next two and half years from an average of 3.1 (a 62 and 68 percent increase respectively). Account holders with ATM cards made more deposits and withdrawals, as well as had larger value transactions. ATM cards changed how frequently individuals added to and accessed their savings, rather than helping individuals save more overall. The increase in use did not affect overall assets, debt, or income, though it did decrease the likelihood that couples participated in informal savings groups.

Women may have responded differently to the ATM cards due to lower levels of bargaining power within the household. On average, women in this sample had less proxied bargaining power than their husbands—defined as lower levels of income, education, and literacy and being younger than one’s spouse. Results show that individuals with low bargaining power, often but not always women, used their accounts less when provided a free ATM card. ATM cards made deposits easier to access, but also more vulnerable to appropriation by their spouse. For these individuals with low bargaining power — women and men alike — the ease of withdrawing money was a drawback, not a benefit.

Taken together, these results highlight the importance of considering how efforts to make savings easier to access and cheaper may have unintended consequences for individuals with low bargaining power. Developing products that offer both convenience and high levels of safety and security may be a promising way to meet the needs of low-income savers with weaker bargaining positions in the household.