Many low-income households face challenges to managing finances, striving to smooth day-to-day consumption and finance religious and ceremonial expenditures while weathering frequent severe shocks in the absence of formal savings mechanisms. Researchers conducted a randomized evaluation to test the impact of a savings lockbox, or SMS reminders, on household saving, spending, and the ability to cope with negative shocks in rural Niger. Take-up and usage of the lockbox were high, and while the lockbox intervention did not affect overall saving or spending, it helped households cope with the negative effects of a health shock. Conversely, there were no additional effects of the SMS reminders.

Rural households in sub-Saharan Africa are often faced with a number of competing savings goals, such as family ceremonies, religious festivals, agricultural investments, school fees, and emergencies. These households often have limited access to formal financial institutions and typically rely on informal mechanisms to meet their financial goals, such as savings groups, saving at home, savings collectors, and moneylenders. Access to multiple ways of saving can help households meet their many financial needs, for example, saving for health, education, and ceremonial expenditures or weathering financial shocks. For low-income households in areas with very limited use of formal financial services, can access to a simple savings technology or SMS reminders about household saving and spending help them meet their savings goals and cope with shocks?

Niger is one of the poorest countries in the world, with an estimated 85 percent of the population living on less than US$2 per day. Access to formal financial services is also extremely limited: fewer than 10 percent of adults have an account in a formal financial institution. Of households participating in this evaluation, less than 1 percent used a formal account for saving, instead relying on informal savings mechanisms such as livestock, savings groups, and saving at home.

In addition to saving for ceremonies and shocks, other common savings goals included education and agricultural expenses. Yet, almost half of households reported being unable to meet their savings goals, which they attributed to not having enough money, spending on an urgent need or emergency, or unexpected expenses, often during religious ceremonies. 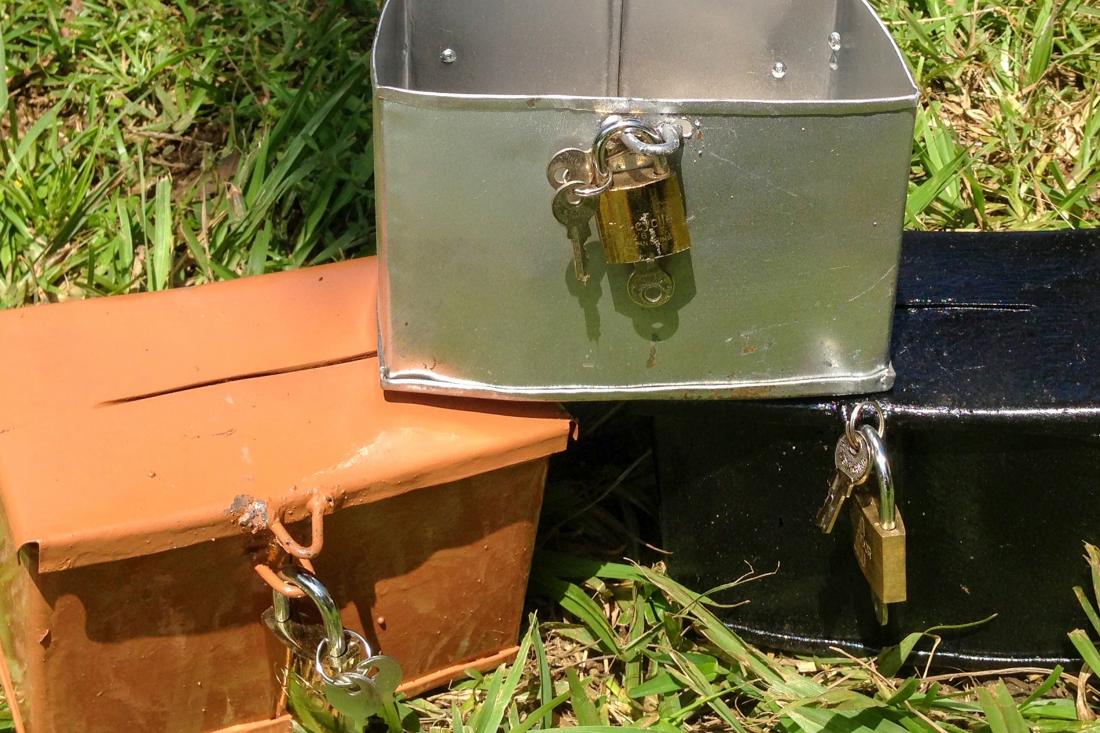 Researchers conducted a randomized evaluation to test the impact of a savings lockbox or SMS reminders on household saving, spending, and ability to cope with negative shocks in rural Niger.

In September 2013, researchers delivered a small metal lockbox and key to households in 35 randomly-selected villages out of seventy that had previously participated in an adult education program and related mobile phone-based curriculum. Members of the remaining 35 villages in the sample did not receive lockboxes. The lockbox provided individuals a more secure, visible place to save compared to other common informal savings mechanisms, which could have affected savings, expenditures, and welfare in a few ways. First, the physical distance from the cash may have made it easier for people to resist unplanned expenditures, especially during religious festivals. Second, the visibility of the physical box may have helped keep saving “top of mind.” Third, if households used the lockbox for a specific savings goal, they may have mentally “labelled” the account, which could have helped them meet their savings goals. Additionally, savings in cash could help households cope with unplanned expenses without selling livestock or taking on debt.

In addition, researchers identified fifty people within each of the seventy villages and randomly selected eight to receive a series of SMS reminders in the two weeks prior to the commonly-celebrated Muslim festivals of Ramadan (June 2014) and Tabaski (October 2013 and September 2014). The messages were intended to focus attention on unplanned expenditures during a time when households reported most regretting their spending as it prevented them from reaching other savings goals. Before each festival, each person assigned to the SMS reminder received three types of messages, for a total of fifteen over the course of the evaluation (five for each of the three holidays):

This design yielded the following four groups in the sample:

To measure the impact of the lockbox and SMS reminders on household expenditures and savings goals, researchers utilized household surveys conducted before and after the interventions. They also measured the impact on savings over the year and expenditures, including ceremonies, health shocks, and food security, by conducting three telephone surveys for a subset of 300 households.

There was high demand for and usage of lockboxes, a simple savings device. While the lockbox intervention did not affect overall spending on ceremonies and health, it helped households cope with the negative impacts of a health shock.

Take-up of the lockboxes was high: 96 percent of those assigned to the lockbox treatment received a box and nearly all still had it one year after the intervention. Six months after its introduction, 63 percent were saving in the lockbox, and 41 percent had savings in it one year later. The high take-up and usage rates of simple lockboxes suggest that there is unmet demand for a secure place to save in rural Niger. In contrast, only 18 percent of households in the text message treatment group recalled receiving a SMS reminder prior to the last holiday, and, due to low literacy rates, only 39 percent of those respondents who remembered receiving a message were able to read it themselves.

Households assigned to the lockbox treatment shifted to more secure ways of saving but did not save more overall than households without access to the lockboxes. One year after the intervention, households in the lockbox group were 7 percentage points less likely to save under the mattress, a 19 percent decrease from the comparison group mean of 37 percent. Similarly, lockboxes increased the likelihood that households saved at home in a more secure way (e.g., box, jar, burying) from 57 percent to 79 percent (a 39 percent increase). However, one year after the intervention, there was no difference in overall savings amounts between households in the lockbox group and comparison households. Overall, there were no additional effects of the SMS reminders.

Though households assigned to the lockbox treatment did not change their expenditure patterns, lockboxes did make households less sensitive to health shocks. The lockbox intervention did not affect spending on religious festivals, weddings, and naming ceremonies, nor health expenditures. In the face of health shocks, households without access to the lockboxes reduced measures of income, asset and livestock ownership, and food security by 7-10 percent. Conversely, households assigned to the lockbox treatment were able to partially or fully mitigate the negative effects of these shocks. This is, in part, explained by lockbox households’ shift away from using livestock and loans and toward using cash savings to finance their religious and health expenditures. However, lockboxes did not have similar effects on the ability to cope with drought, another common shock in Niger.

Taken together, these results suggest that a simple savings device can allow households to finance unexpected events by holding onto their income-generating assets, namely livestock, in contexts with limited access to formal financial services. However, the program was stopped after its initial inception and was not scaled up.