Take-up of social programs is often low despite large expected benefits, which may be due to several reasons, including stigma. To better understand this phenomenon, researchers studied the effects of acknowledging and refuting stigma on take-up of labor market assistance programs. The results of three randomized evaluations indicated that mentioning stigma, even with the aim of dispelling it, generally reduced take-up of these programs. These impacts varied according to individuals’ maturity and work experience levels.

Take-up of social programs, including labor market assistance programs, is low around the world. This may be due to factors such as lack of information about the programs and the efforts of applying to them. Concern about the stigma associated with partaking in certain programs or activities may also influence an individual’s decision to apply for and enroll in labor market assistance programs. In some instances, youth may choose to remain unemployed rather than pursue jobs that they perceive to be professionally unappealing or socially looked down upon.

It is generally believed that stigma largely factors into low take-up rates, but there is limited evidence on this. More research on how different forms of stigma and recruitment practices influence an individual’s, particularly a youth’s, selection into social and labor market assistance programs can help inform efforts to improve these programs’ take-up rates across different demographic groups.

Greater Cairo is one of the largest and fastest-growing urban areas in the world, and it has the highest population density within Egypt. It is home to approximately 21 million individuals, 60 percent of whom live in informal settlements. Egypt is a middle-income country, with a purchasing power parity-adjusted GDP per capita of approximately 12,000 USD. According to the International Labor Organization, the country has one of the highest unemployment rates in the world, as 33.4 percent of its youth population aged between 15 and 24 faced unemployment issues in 2016.

Although political and economic instability associated with post-revolutionary Egyptian society has played a role in altering labor market conditions, employment challenges in Egypt precede the 2011 uprisings by decades. Several factors contribute to high unemployment rates among youth in Egypt today, including the scarcity of jobs that are available and socially perceived as desirable. Recognizing the impact of stigma and job perceptions on take-up rates of labor market assistance programs and youths’ labor force participation is crucial to overcoming labor market challenges in Egypt. 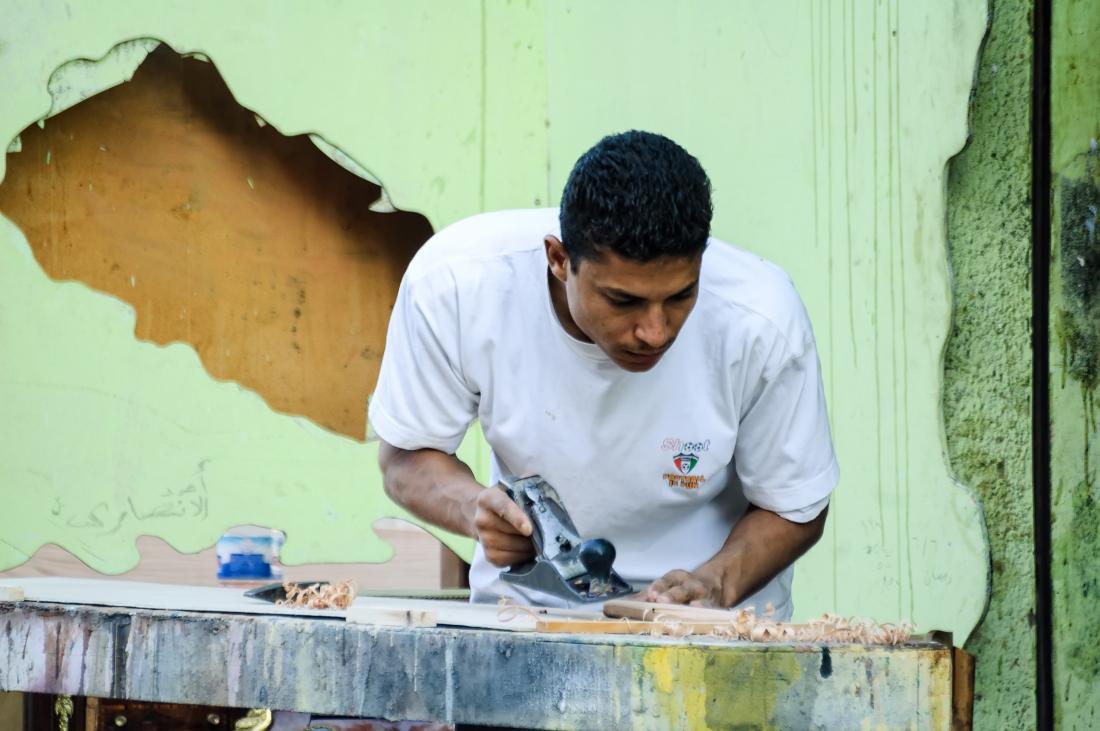 Three randomized evaluations assessed the impact of different types of stigma on take-up of labor market assistance programs. Researchers partnered with Egypt’s Education for Employment (EFE) office for two evaluations and with JobMaster to conduct the third. EFE is an NGO that specializes in demand-driven training and job matching. It partners with employers to train college-educated youth for entry-level jobs in Egypt’s services sector. Similarly, JobMaster is a recruitment company that provides human resources services through hosting job fairs and other forms of support.

Evaluation One: Facebook ads about a job training to study social and professional stigma

The first evaluation used Facebook, which is widely used in Egypt, to recruit for a job training in late 2018. Facebook advertisements reached 767,768 young users living in greater Cairo. Each ad acknowledged the existence of either social or professional stigma and tried to dispel it through testimonials from previous graduates of the training program.

Participants were randomly divided into one of three groups, which determined which ad the user saw.

Researchers studied which message, if any, was effective at increasing sign-ups for the training program. The use of Facebook facilitated testing advertisements against each other and reaching a large number of young job-seekers. However, drawbacks of the intervention were that Facebook users often ignore ads on the platform, and it was impossible to discern participant characteristics other than their gender and age.

The second evaluation focused on approaching youth in person through street-level marketing. Surveyors asked individuals whether they were interested in learning about a training program for youth searching for jobs and were able to survey a total of 2,900 individuals.

Pitches on social and professional stigma in this evaluation matched the advertisements in the first evaluation. A third pitch measured the effects of alluding to personal stigma and a fourth to measure the impact of welfare stigma.

After being told the price of the program, some participants also received a pitch that explained that the “true cost” of the training has been reduced to “help those in financial hardship.” This pitch helped identify the impact of welfare stigma.

Researchers studied which message, if any, was effective at increasing the number of individuals who agreed to apply to the training program. In-person marketing for the training program allowed more information to be collected about individuals’ backgrounds to better assess the impact of job-seekers’ characteristics on their take-up choices. However, the more intensive nature of in-person interactions limited the number of participants taking part in this evaluation.

While evaluations one and two focused on the relative impacts of different types of stigma, evaluation three measured the impact of social stigma and whether it could be adequately dispelled. Rather than providing information about a multi-week job training program, door-to-door recruitment in the third evaluation provided information about an upcoming free job fair focused on entry-level jobs in the service sector. Participants were assigned to one of three groups.

Researchers studied which message, if any, was effective at increasing the number of individuals who attended the job fair. Because the focus was on attending a one-time job fair, rather than a longer job training course, it also allowed researchers to observe actual attendance of the job fair instead of just applications. They were also able to gather more information about the young job seekers to analyze the varied impact of stigma on individuals of different backgrounds and aspirations.

Stigma may have varied effects on job-seekers depending on their age and socioeconomic status (SES). In evaluation one, mentions of both social and professional stigma reduced sign-up rates for job training programs. However, the impact was larger among younger individuals than among older ones. This may have occurred because older people may be less sensitive to stigma and what others may think of them and their jobs, as concerns about the marriage market decrease as age and maturity levels increase.

Attempting to dispel stigma may further reduce job-seekers’ interest in attending job fairs, especially among younger individuals. In evaluation three, the mere mention of social stigma decreased job seekers’ attendance, with attempts to dispel the stigma decreasing attendance even further. Once again, impacts varied by age, as mentions of stigma strongly affected younger individuals and reduced their attendance by 5.3 percentage points (from 5.9 percent in the comparison group to 0.6 percent in the group receiving the pitch), a 90 percent decrease in attendance relative to the comparison group. The same mentions had no impact on older people, and there were no differences in attendance according to backgrounds and SES.

These results demonstrate the importance of messaging and tailoring information according to individual characteristics. Allusions to stigma associated with entry-level jobs affected labor market decisions, though the impacts varied according to individuals’ SES and age. Further research is needed to assess various messaging strategies and their influence on different target groups.