Improving the Design of Conditional Transfer Programs in Colombia

Conditional cash transfer (CCT) programs have been proven effective at improving educational attainment in some settings, but there has been little rigorous evaluation of CCT product design. Researchers in Bogotá, Colombia, evaluated whether changing the timing and type of CCTs could lead to greater impact on educational attainment. All CCT variations had similarly positive impacts on school attendance, but transfers conditional on continued education had a greater impact on secondary and tertiary school enrollment, particularly for the most at-risk children.

Over the past decade, many developing countries have expanded primary school access, energized by initiatives such as the United Nations Millennium Development Goals, which call for achieving universal primary education by 2015. High student absenteeism is a considerable challenge, however, since families can face many barriers and opportunity costs in sending their children to school. School enrollment issues are thought to be more pronounced among girls, low-income families, and older children. Despite the importance of education, academics and policymakers are still far from understanding what determines whether or for how long children are educated. Conditional cash transfer programs have been effective at improving education outcomes in some settings (notably Mexico's PROGRESA/Oportunidades program); however, their impact on other goals and in other environments may be very different.

Colombia is a relatively typical middle-income, Latin American country. Child mortality is relatively low at 21 per 1,000 births, and only 18 percent of the population lives on less than two dollars a day. Similar to many middle-income countries, school attendance in Colombia is close to 100 percent for younger children but declines substantially after the age of 13. Average attendance is 92 percent among 15-year-olds, 90 percent among 16-year-olds, and 80 percent among 17-year-olds. The drop is considerably faster for low-income individuals: by age 17 the attendance rate falls to 65 percent in this group. Moreover, in 2003, individuals from the bottom of the Colombian poverty index represented nearly 74 percent of those not properly enrolled in school. The primary reason cited for dropping out is the cost of education. Students must pay to enroll each year and pay for required items like uniforms, books, and supplies. Monthly education costs fluctuate between US$13 and US$22—a relatively large expense considering that the poorest families in Bogotáearn less than US$750 a year. 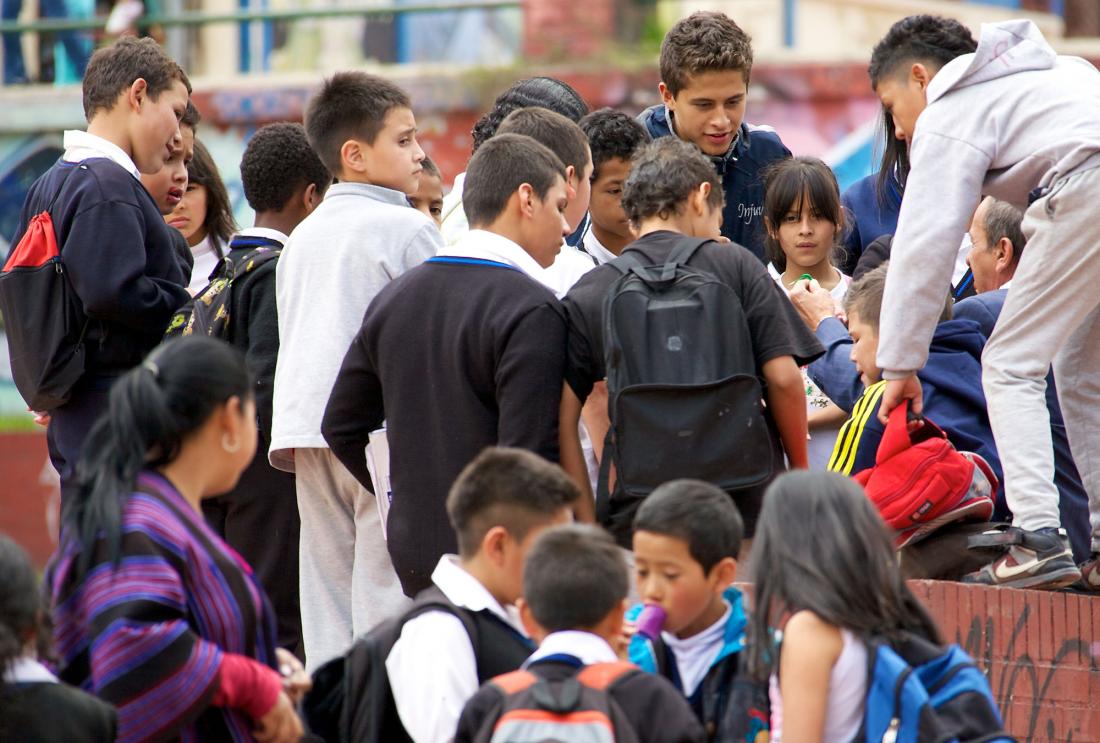 Students in Bogotá gathering around their teacher. Photo: Ivan_Sabo | Shutterstock.com

In 2005, the city of Bogotáestablished the Conditional Subsidies for School Attendance ("Subsidios Condicionados a la Asistencia Escolar") program in an effort to improve student retention, lower drop-out rates, and reduce child labor. Three different incentive structures for a new conditional cash transfer system (Subsidios) were piloted in two localities within the city:

Basic model: Participants received US$15 per month, conditional on the child attending school at least 80 percent of the required days that month. The total annual value of the transfer (US$150) was three times more than students' reported average labor market earnings and was slightly more than the average annual reported education expenditure (US$125). Students were removed from the program if they failed to reach the next grade twice, failed to meet the attendance target in two successive periods, or were expelled from school.

Savings treatment: This variant altered the timing of cash transfers by saving a portion of the monthly stipend on a bank account to be paid out at once. The monthly US$15, which was still conditional on an 80 percent attendance rate, was split into a direct payment of US$10 and a savings component of US$5 which was held in a bank account. The accumulated funds were made available to families at the end of the year, just before enrollment for the subsequent grade level. This one-time payment of accumulated savings was unconditional on further attendance rates, i.e. once a child met the attendance target in one month, the banked US$5 was to the family at the end of the year regardless of attendance in later months. This structure created a mechanism for families to save money for annual enrollment costs which might otherwise be an obstacle to students' continuing from one grade level to the next.

Tertiary treatment: In addition to providing an incentive to attend school, this treatment provided incentives to graduate and then to matriculate to a higher education institution. Like in the savings treatment, the monthly subsidy was reduced from US$15 to $10. However, upon graduating, students earned the right to receive a transfer of US$300, equivalent to 73 percent of the average cost of a year at vocational school, if they enrolled in a higher educational institution within one year.

Researchers found that changing the structure of cash transfer programs had significantly different effect on enrollment and attendance rates, as well as graduation, enrollment in secondary school and matriculation to tertiary institutions. The first experiment compared the basic with the savings treatment, while the second experiment evaluated the tertiary treatment.

Moreover, this study identified the specific groups for which the different interventions have the greatest effects. The difference, for example, in performance of the basic and savings treatments was entirely driven by their effects on the most at-risk students. The savings treatment was especially effective at improving enrollment of the lowest income students and students with the lowest participation rates. In comparison, the basic treatment had little effect on these groups of students. The tertiary treatment performed similarly to the savings treatment with a much more significant impact on students unlikely to re-enroll. This suggests that modifications in the structure of these interventions can also help target the program by better meeting the needs of those students most likely to drop out of school.

There is some evidence that participation in these programs may cause potentially worrisome reallocation of resources within the household. Such spillover effects were evident in the finding that siblings (particularly sisters) of treated students worked more and attended school less than those in families that received no treatment. Such findings suggest that families may decide to concentrate resources towards the sons and daughters that have become program beneficiaries and away from those children that did not.

Overall, this research showed that experimenting with the design of incentive programs can have substantial benefits in terms of the efficacy of these programs. Simply postponing some of the cash transfers to a large lump sum paid at the time of re-enrollment increased enrollment in both secondary and tertiary institutions without reducing daily attendance - particularly so for the poorest students and those most at-risk of dropping out. Moreover, providing incentives for graduation rather than attendance alone was particularly effective, leading to higher levels of daily attendance and higher levels of enrollment at secondary and tertiary levels.