Improving Electoral Integrity with Information and Communications Technology in Uganda

Many new and low-income democracies like Uganda suffer from institutional weaknesses which foster corruption including electoral fraud. Researchers sent letters to polling stations announcing smartphone vote-tally audits to evaluate the impact of audits on electoral irregularities such as non-adherence to transparency regulations and falsified vote tallies. Relative to a comparison group, letters increased the number of polling stations posting vote tallies in accordance with the law, reduced fraudulent vote tallies, and decreased the vote share for the incumbent president. These results suggest that citizen and ICT interventions can improve electoral integrity in developing democracies.

Free and fair elections are the cornerstone of modern democratic governments. However, many new and low-income democracies like Uganda suffer from institutional weaknesses which foster corruption. Politicians can exploit these weaknesses and manipulate electoral processes to gain personal power or wealth. They may do so by influencing polling center managers to miscount or falsify local vote tallies, or more centrally by using their control over the government’s electoral system. These actions are often hidden from the public, making detecting and deterring this type of electoral fraud difficult.

The international community annually spends hundreds of millions of dollars on efforts to ensure fair elections in developing countries—often through deploying election observers. However, election observation missions tend to rely on anecdotal and unsystematic data to detect election fraud. Some research suggests that traditional election monitoring efforts in some settings can have positive effects reducing corruption and the manipulation of vote counts; other studies using cross-national data show that international efforts are often associated with null or negative impacts on electoral processes. Better information collection systems could be used to improve the effect of observation on electoral integrity by increasing the capacity of observers to detect fraud. Information and communications technologies (ICT), such as smart phone applications which facilitate real-time confirmation of vote tallies, may provide an avenue through which to quickly and cheaply crowd-source diffuse election information.

Uganda held national presidential elections in February 2011. President Yoweri Museveni has held office since 1986 and faced opposition leader Kizza Besigye in both the 2006 and 2011 presidential races.

Electoral law in Uganda requires polling center managers to publicly post their centers’ vote tally no later than the day after the election. This is meant to allow the public and observers to confirm polling center vote tallies with the tallies certified by the central Ugandan Electoral Commission (EC). Public posting is meant to prevent efforts to rig the election through an obviously manipulated local ballot count or by manipulating the aggregate count process. Failure to post results may result in a large fine and/or jail time for polling center managers. However, compliance with the law is low. In 77.5 percent of polling centers in the study sample, vote tallies were missing, leaving most Ugandans unable to know or verify the count at their own polling center. 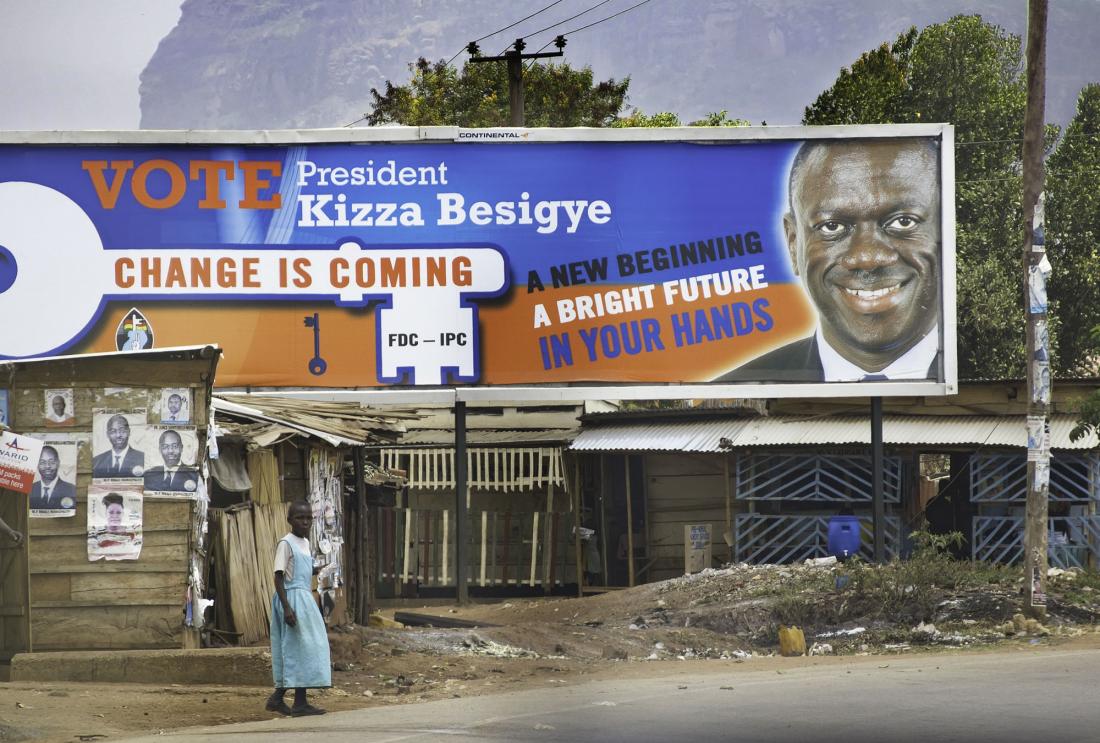 Researchers conducted a randomized evaluation to measure the impact of letters warning of audits and punishment for election fraud, combined with smartphone vote-tally verification, on electoral irregularities. From Uganda’s official national list, 1001 polling centers1 were randomly assigned to one of four groups:

Using smartphones equipped with a custom application, local researchers and field managers photographed vote tallies and completed a short survey at each polling station. The smartphone application immediately uploaded photos and survey results to a server over cellular networks.

In order to determine impacts of the letters and smartphone monitoring on irregular electoral activity, researchers tracked whether polling stations posted provisional tallies, whether tallies included more adjacent numbers—a commonly used measure of voter fraud— than would be expected, and the vote share of the incumbent president, the candidate most likely to benefit from election rigging. Evidence from behavioral psychology indicates that when manufacturing numbers, humans use more adjacent digits than would be mathematically expected at random. Therefore, a higher frequency of adjacent digits can demonstrate whether election officials are falsifying vote counts rather than recording the actual tally.

In the full sample, none of the letters had statistically significant impacts on share of votes going to the incumbent president. However, when using data from only polling centers which posted vote tallies, monitoring letters reduced votes for the incumbent by 10 percent, punishment letters by 8 percent, and combination letters by 16 percent.

These results broadly replicate those of a prior experiment in Afghanistan by the same team2 .

This suggests that smartphone vote tally monitoring may be a relatively cost-effective method for reducing electoral fraud: it costs approximately $40 per polling center, compared to an estimated $6,220 cost per polling center for the European Union’s election observation missions. Because it requires few inputs and requires only a smartphone with a camera, the design may be easily adopted across a range of countries.

1.
Polling centers from all over the country were included in the sample, however, in the North, researchers only sampled from areas that experienced violence during the war from 1987-2008.
2.
Callen, Michael and James D. Long. “Institutional Corruption and Election Fraud: Evidence from a Field Experiment in Afghanistan.” American Economic Review, 105(1)(2015): 354-81.DOI:10.1257/aer.20120427