Rainfall index insurance could help protect farmers from extreme weather by providing payouts during years of low or excess rainfall, but take-up remains low. Researchers evaluated the impact of providing financial literacy education alongside various marketing strategies to small-scale farmers in Gujarat, India, on their demand for rainfall index insurance. Financial education had a significant effect on adoption of rainfall insurance, but was not a cost-effective way to raise demand.

Farming households engaged in rain-fed agriculture are highly vulnerable to weather shocks: low or excess rainfall can substantially reduce crop yields and lead to large drops in income and consumption. This risk may cause farmers to make safer, but less profitable, agricultural investments. Rainfall insurance, a popular format of index-based weather insurance in the developing world, is a financial product that could help protect farmers from adverse weather shocks by providing payouts during years of low or excess rainfall. Yet, adoption of rainfall insurance is low. There are several possible explanations for low take-up, including low trust of the insurance company among farmers or farmers’ fear that there will be no benefit from purchasing insurance when rainfall is adequate. Another possible explanation is that rural households do not purchase insurance because they have a limited understanding of its benefits and costs. If this is true, then providing farming households with financial literacy education may increase the adoption of rainfall insurance, and possibly other complex financial products, and lead to decreased vulnerability to weather shocks. Different marketing strategies may also further increase demand for rainfall insurance among rural households.

Two-thirds of all agricultural land in India is rain-fed and variation in rainfall greaty affects farmers’ incomes. As a result, in one survey, almost nine out of of ten households reported that variation in rainfall is the most important risk they face. Yet, despite the availability and relatively low-cost of rainfall insurance in India, a study conducted in 2006 and 2007 found that less than 10 percent of households in the sample purchased insurance.

In the spring of 2009, the nonprofit organization Development Support Center (DSC) introduced rainfall insurance in 15 villages in three coastal districts in Gujarat, India. In these districts, farmers are largely engaged in rain-fed production of two main cash crops: cotton and groundnut.Approximately two-thirds of the households in this study were small-scale farmers (farming less than twp hectares or five acres of land) who faced substantial risk of reduced yield due to low or excess rainfall. The average rainfall insurance premium cost Rs. 800 (US$17.771 ) per acre with a maximum payout was Rs. 6,500 (US$144.41) per acre. Protection against low rainfall was provided during the early rainy season between July and September and protection against excess rainfall was provided during the late rainy season between mid-September and October. 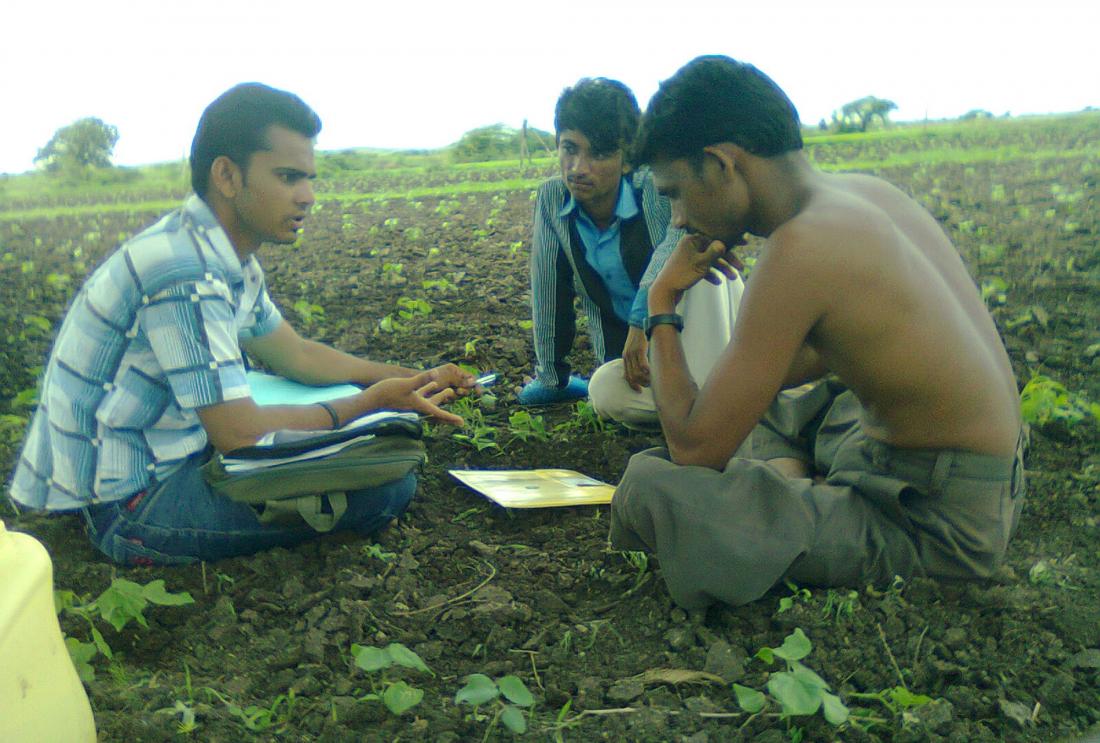 Researchers tested the effect of a financial literacy program, as well as different combinations of marketing strategies, on households’ take-up of rainfall insurance. From the 15 villages where DSC was about to introduce rainfall insurance, they randomly selected 600 households from all landowning cotton and groundnut farmers to participate in the study. Three hundred of these were randomly selected to receive an invitation to the financial literacy education program, while the remaining half were selected to be in the comparison group. The program consisted of two three-hour sessions led by NGO employees. The first session covered general lessons on financial management, savings, credit management, and insurance. Trainers used custom charts, posters, pamphlets, and a video on the importance of rainfall insurance to teach the lessons. In the second session, participating farmers played two simulation games to learn how rainfall insurance works and about its benefits and limitations.On average, 75 percent of invited households attended the program.

From both treatment and comparison households, 282 households were randomly selected to receive a marketing visit from a DSC employee who delivered an assigned marketing message or combination of messages after the education program ended. Households receiving the marketing treatment were given one or more of the three marketing techniques:

Impacts of the marketing strategies: The follow-up marketing visit offering a money-back guarantee further increased the proportion of farmers who purchased insurance. Receiving an offer for a money-back guarantee on the insurance premium increased the demand for insurance by 6.9 percentage points relative to those who did not receive this offer. This suggests that the fear of losing the value of the insurance premium without receiving any benefit from insurance during years of adequate rain can be a barrier to farmers’ participation in the market for rainfall insurance. While effective, the money-back guarantee was also expensive: the authors estimate that it cost about US$43.62 per additional insurance policy sold. The other two marketing strategies, forecasts and demonstrations, while less expensive, had no statistically significant impact on the demand for rainfall insurance.