Public-private partnerships to provide education in low-income countries are common, yet sometimes can be controversial. In Liberia, researchers conducted a randomized evaluation to measure the impact of 93 partnership schools—free public schools with management outsourced to private operators on both learning and social metrics. After three years, partnership schools raised students’ test in mathematics and English. Looking beyond learning gains, the program reduced corporal punishment, but increased dropout rates and failed to reduce sexual abuse. Results also varied by provider: some produced uniformly positive results, while others presented stark trade-offs between learning gains and other outcomes.

Despite progress in primary school access around the world, learning levels remain low. An important question in low- and middle-income countries is whether the private sector can improve learning outcomes when public school systems fail. Public-private partnerships in education are common around the world. However, their role is controversial. Proponents of such partnerships argue that private operators may be able to operate schools more effectively, delivering the same or better results for students at lower cost than resource-limited governments. Opponents argue that monitoring challenges, limited outside options for citizens in remote areas, and a narrow focus on test scores at the expense of other aspects of students’ well-being such as access and child safety may create harm. The rigorous evidence on this question is mixed, with little experimental or quasi-experimental evidence from low- and middle-income countries.

In 2016, the Liberian government outsourced the management of 93 randomly selected public schools, comprising 8.6 percent of public school students, to eight different private operators in a program called the Liberian Education Advancement Partnership (LEAP). 1  (The program was later expanded to 101 additional schools.) The government’s primary, stated motivation for the outsourcing program was the low learning levels in public schools. According to demographic and health survey data, only 25 percent of adult Liberian women who had completed primary school were literate, one of the lowest rates in the world. 2

The model is similar to charter schools in the United States or academies in the United Kingdom. However, in contrast to many public-private partnerships in education, the teachers in the Liberian public schools that were outsourced to private providers were to remain civil servants and were still paid directly by the Liberian government. Each school was managed by one of eight private contractors, including three for-profit companies and five charities, which took responsibility for everything from teacher in-service training to fixing leaks in the school buildings’ roofs. Providers were paid on a per-pupil basis (with some exceptions) and forbidden from charging fees or screening students based on ability. 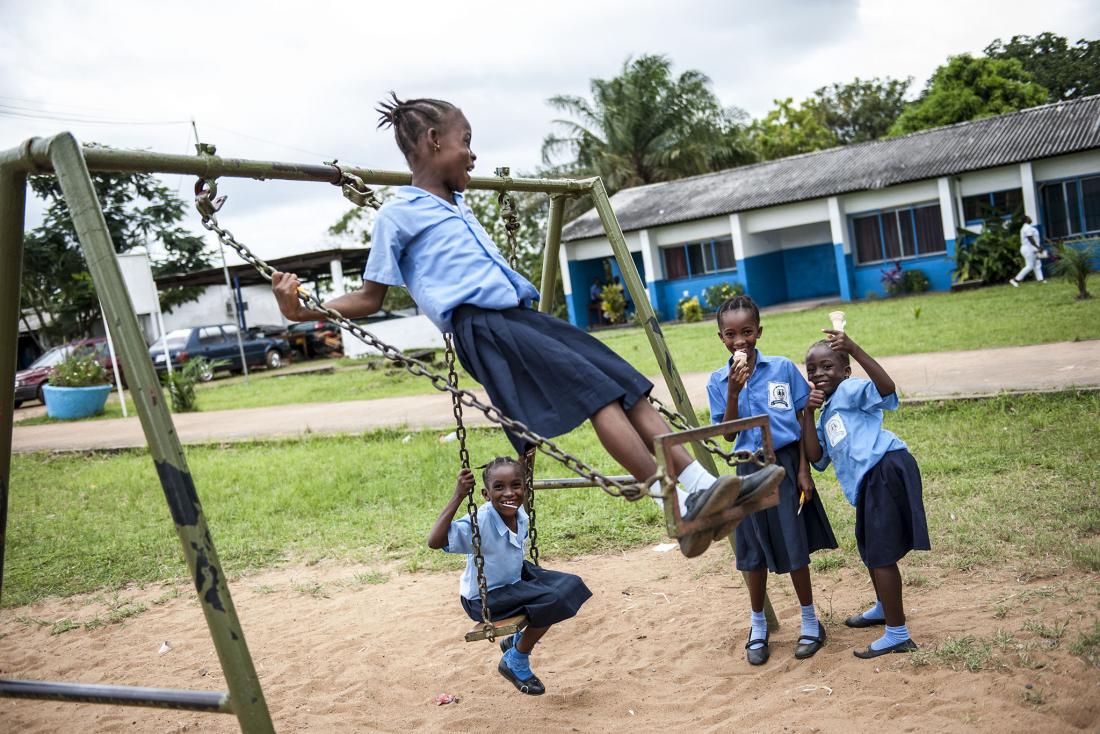 Researchers worked with Innovations for Poverty Action, the Liberian Ministry of Education, and the group of eight private operators to conduct a randomized evaluation to assess the effects of outsourcing management of public schools after one and three years.

A total of 185 schools took part in the evaluation. The sample of schools included was not representative of the country as a whole; rather, schools were required to meet certain minimum infrastructure requirements, and private providers were further allowed to filter the list of potential schools to be included in the evaluation based on proximity to roads and availability of cell service.

Of these 185 schools, 93 were assigned to one of the eight private operators. The other 92 schools continued to be operated by the government and served as a comparison group.
Of the eight private organizations, three are for-profit companies: Bridge International Academies (which was allocated 23 schools), Omega Schools (allocated 19 schools), and

After one and three years, the research team measured the impacts of LEAP on school access, learning, and financial sustainability. Child safety, measured through corporal punishment and sexual abuse, was also added to the survey that took place after three years. Pupils who were in a school included in the evaluation before the study began were surveyed, regardless of where they went. Researchers also surveyed teachers and collected school-level information about facilities, the teacher roster, the availability of materials such as textbooks, and expenditures.

School access and drop-out: Outsourcing led to increased enrollment in privately-operated schools, but had a negative effect on educational attainment for the students originally in them. Negative effects on pupil-level enrollment emerged in the first year due to mass expulsions by one private operator, Bridge International Academies. After three years, there were still negative impacts on the probability of children still being in school or transitioning to secondary school. Researchers highlight that the phenomenon, still concentrated in Bridge schools, appears unrelated to the expulsions in the first year and is driven in part by higher rates of drop-out attributed to pregnancy (3.3 percentage points from a base of 15 percent).

Child Safety: Overall, corporal punishment declined, but was not eradicated. The percentage of students reporting having been hit by their teachers at least occasionally declined 4.6 percentage points relative to the comparison group (51 percent).

Despite an influx of new resources and external oversight in partnership schools, sexual abuse did not decline. Survey results from 2019 (three years after the study) show 3.6 percent of students reported sexual intercourse with a teacher, and 7.5 percent reported some form of sexual contact with a teacher.

The program was originally known as Partnership Schools for Liberia (PSL).