In sub-Saharan Africa, many of the region’s low-income individuals are small-scale farmers. While certain agronomic practices, such as pruning tree crops, can substantially increase yields, take-up of many such practices remains low, potentially resulting in lower yields and profits. In Rwanda, researchers worked with TechnoServe to evaluate the impact of an agronomy training program on farmers’ knowledge and use of best practices in coffee-growing. Preliminary results suggest that the trainings helped some farmers improve their coffee-growing practices, but that the practices more likely to be adopted were those that required less effort on the part of the farmers. Future analysis will examine whether and how these practices spread through farmers’ social networks.

Seventy percent of the world’s low-income households live in rural areas and depend on agriculture as their main source of income.1 Yet, agricultural productivity remains low, particularly in Sub-Saharan Africa. For the past three decades, agricultural productivity in the region has grown at half the average rate of all low- and middle-income countries.2 Low agricultural productivity keeps farmers and their families in poverty. Agricultural technologies—for example, best practices in pesticide and fertilizer use—have the potential to increase crop yields, and could improve small-scale farmers’ profits and well-being in many sub-Saharan African countries. However, lack of knowledge, limited capital, and perceptions of risk may prevent some farmers from adopting new technologies from which they could potentially benefit.

Little evidence exists on why farmers adopt some technologies and not others, and how agricultural technologies and techniques spread through social networks. Both questions are important for policy design. If technology use spreads quickly between family and friends, then programs can train a few well-connected farmers in fertilizer and pesticide use and expect that these farmers will spread the information to others. However, if there is little diffusion, then programs may be better off training many farmers in a concentrated geographic area in order to have the largest impact. This research project provides new evidence about whether training programs can help farmers learn and use best practices in coffee-growing, and how this knowledge spreads through social networks.

Coffee is a major export crop for Rwanda and contributes about US$34 million in export earnings a year, about 15 percent of the country’s foreign exchange earnings. In Rwanda, one of the most densely populated countries in sub-Saharan Africa, land parcels are extremely small, averaging only a few acres. The coffee industry in Rwanda is dominated by about 500,000 smallholder coffee producers, with an average of 170 coffee trees each. Most of these families live off subsistence agriculture, and therefore give priority to food crops. Since their revenues from coffee sales are limited by their production level, finding ways to improve their yields could make coffee a more attractive crop choice and may help small-scale farmers shift out of subsistence farming into more profitable activities. 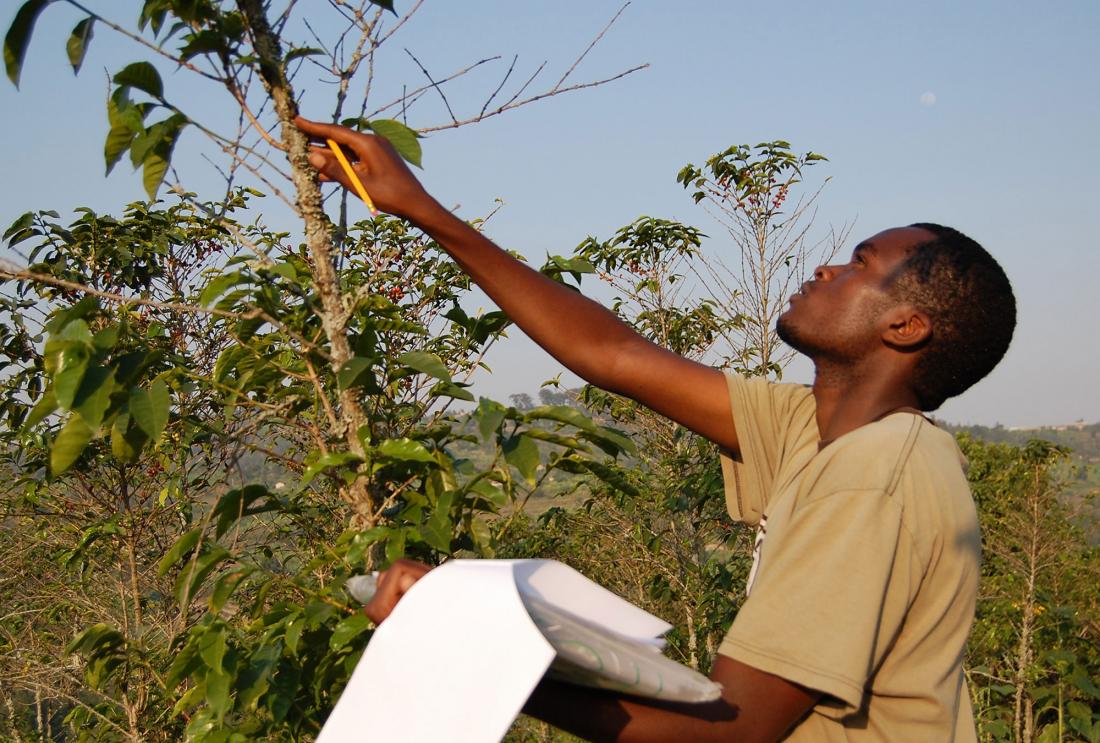 This design allowed researchers to measure the diffusion of information about the agricultural practices within villages. The training covered several best practices in coffee growing: tree pruning; fertilizer use; pest, disease and weed management; mulching; soil and water conservation; and record keeping. Training sessions took place once a month for eleven months in the first year of the program; TechnoServe conducted an additional five review training sessions over the course of the second year. Groups of around thirty farmers attended the trainings, which took place on the plot of a designated "focal farmer" (generally chosen because of the accessibility of his or her plot).

Analysis of the preliminary data suggests that the trainings helped some farmers improve their coffee-growing practices, but that the technologies more likely to be adopted were those that required less effort on the part of the farmers.

Attendance at trainings: During the first year of trainings, farmers in the training villages attended an average of eight out of the eleven meetings (an attendance rate of about 73 percent). Attendance tended to be higher in the villages with higher proportions of farmers who were offered training: households in high-density training villages attended an average of 8.2 out of 11 meetings, whereas households in low density training villages attended around 7.2. This suggests that farmers were more motivated to attend trainings when more of their neighbors were also invited to attend. In future analysis, researchers will investigate whether higher concentrations of trainee farmers also led to more diffusion of coffee-growing best practices.

These results suggest that the trainings helped farmers learn about coffee-growing technologies, and that this knowledge prompted them to make some changes in their farming practices. However, researchers found no effects of the trainings on more time-intensive methods such as pruning, suggesting that farmers were more likely to adopt lower-effort practices such as refraining from pesticide spraying, but not more time-consuming technologies.

Researchers will use the data they collected on farmers’ social networks to track how knowledge about and use of these new technologies and techniques spread, which will help TechnoServe best direct its training programs in future.