Smoking and drinking are two of the most important risk factors explaining early mortality, accounting for an estimated 14 percent of deaths among youth worldwide. In the Dominican Republic, researchers examined the effect of increased schooling and decreased work on smoking and drinking behavior among secondary school-aged boys. Youth with more schooling were much less likely to smoke at age 18 and began drinking at a later age, although by age 18 they drank just as much as boys with less schooling.

Smoking and drinking are two of the most important risk factors explaining early mortality, accounting for an estimated 14 percent of deaths among youth worldwide. Most individuals try drinking alcohol for the first time in their early teens and most adult smokers begin smoking before the age of 18. Previous studies have shown that more educated individuals are less likely to smoke or drink excessively, yet few have explored why more schooling and less work affects health behaviors like tobacco and alcohol use. Youth with more schooling may be less likely to smoke or drink because additional schooling could give them a greater awareness of the health risks of smoking and drinking. Other possible explanations could be that youth with more schooling spend more time with peers who are less likely to smoke or drink than youth who work and have less disposable income to spend on cigarettes or alcohol. It is important to understand if and why more schooling and less work may lead to better health behaviors before promoting education on the grounds of its health benefits.

Recent evidence suggests that tobacco and alcohol use can hinder adolescent brain development, in addition to increasing the risk for heart, lung, and other chronic diseases. Even delaying the onset of tobacco and alcohol use can reduce these health consequences. In the Dominican Republic, 4.3 percent of youth aged 15 to 19 use tobacco products and around 72 percent of these are boys.1 In this study, 13 percent of surveyed boys reported smoking by age 18. Drinking among youth is more widespread: 61 percent of boys in this study reported drinking by age 14. The legal age for alcohol consumption in the Dominican Republic is 18.2

This study builds on an evaluation testing the impact of providing secondary school boys with information about the higher wages earned by those with more years of education. For example, boys were told that, "Workers who finish secondary school earn about 41 percent more than those who don' t. And people who go to university earnabout 85 percent more than those who finish only primary school." After providing this information to a randomly selected group of secondary school boys, researchers found that boys who received the information were 4 percentage points more likely to return to school the next year. They also completed 0.2 more years of school on average than boys who did not receive the information. 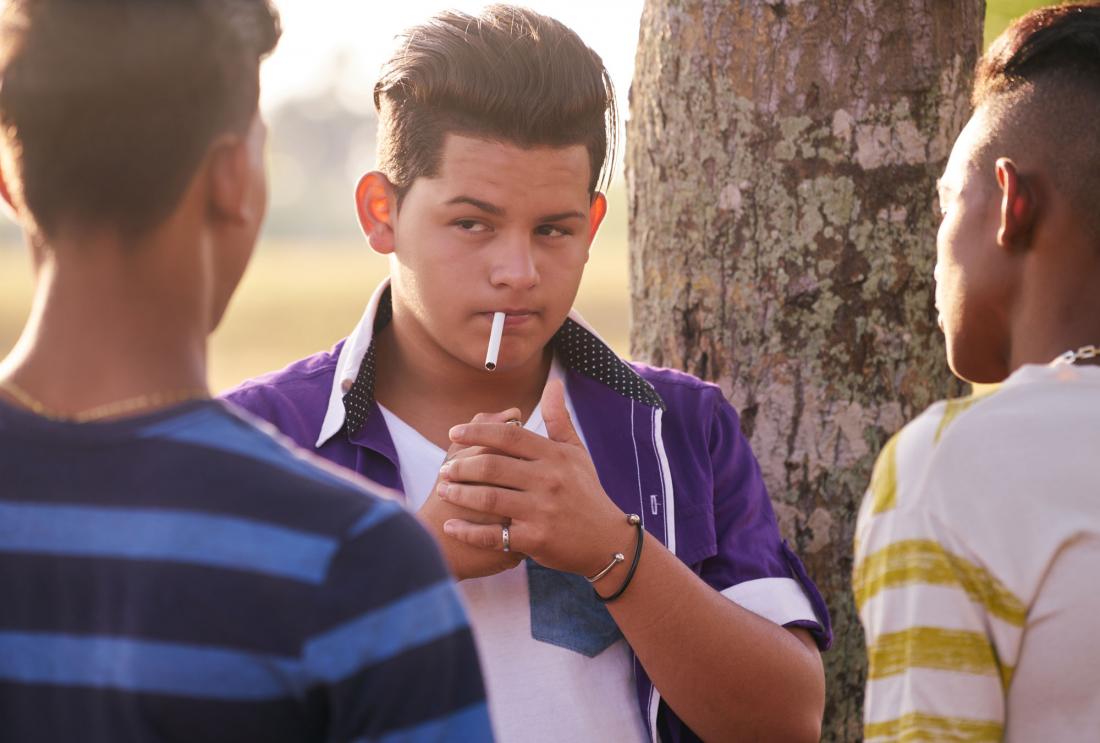 Researchers examined the effect of increased schooling and decreased work on smoking and drinking behavior among secondary school-aged boys. Researchers conducted a baseline survey with all 2,250 boys in April and May 2001 and provided boys in the "treatment group" information on average earnings by education level at the end of the survey.

Impacts on drinking: Boys who stayed in school longer were also more likely to start drinking at an older age. During the first follow-up survey, when the boys' average age was 14, the fraction of boys engaged in daily drinking was 1 percentage point lower among boys with more schooling. Moderate drinking also declined by 2.8 percentage points for 14 year-old boys with more schooling compared to boys with less. Yet, the reduction in daily and moderate drinking disappears by the time the boys are 18, suggesting that more schooling delays the age at which boys start to drink intensively, but does not prevent drinking.

Peers and drinking behavior: Peer behavior was an important factor in explaining how early boys began drinking. At age 14, boys with more schooling drank less and reported having fewer peers who drank , suggesting that leaving school to work can increase the likelihood of regular drinking due to having older peers who drink. By age 18, both boys with more schooling and those with less report that a large fraction of their peers drink, providing more evidence that increasing schooling only delayed the onset of drinking. Researchers also found that having less disposable income did not decrease drinking among 18 year-old boys with more schooling, suggesting that less disposable income does not decrease drinking by the time boys reach the legal drinking age. Again, researchers found that more education did not make boys less likely to drink by making them more patient, risk-averse, or aware drinking' s negative health effects.