Saving for Multiple Goals with Lockboxes in Malawi

Saving for multiple goals at the same time is difficult, especially for individuals without access to formal bank accounts. In Malawi, researchers offered micro-entrepreneurs either single or multiple lockboxes to evaluate the impact of the boxes on savings and other business and financial outcomes. Individuals offered multiple lockboxes saved more than those offered a single lockbox, suggesting that providing lockboxes may be a cost-effective way to promote savings. Additionally, entrepreneurs who received the lockboxes shifted away from their small business and invested in farming, while they also increased spending, credit lent to customers, and transfers to friends and family.

People throughout the world simultaneously save for multiple financial goals of varying amounts and duration. One potential strategy is to create separate accounts labeled for one’s different savings goals. Previous studies suggest that labeling accounts, or designating funds for a specific use, increases the likelihood of meeting saving goals by deterring the use of labeled funds for non-designated expenditures. However, it can be mentally taxing to keep track of funds allocated for different purposes. Creating multiple bank accounts can alleviate this mental burden, but this may be challenging in low-income countries, like Sub-Saharan Africa where 57 percent of adults do not have a formal bank account.1 Can using a simple savings device at home, such as multiple lockboxes to create labeled accounts, make saving for multiple goals more effective?

This evaluation occurred in Blantrye, Mawali, the second largest city in the country with a population of over 1 million in the urban center. Of the small business owners in the sample, over half were women and most had businesses that were in the retail or service industries. Business owners were also more likely to have an iron roof on their house, suggesting these households were richer than the average Malawian household.

Before the evaluation, most of these small business owners already physically separated their savings for different goals and had an average of US$120 in savings, split across 2.5 saving places for more than two goals. Individuals identified a variety of savings goals, including for: business reinvestment, emergencies, household expenses, buying land or durable goods, and their children’s education. Over 80 percent of individuals saved at home and while some business owners (22 percent) had a lockbox before the evaluation, most boxes were low quality and either could not be locked or had to be broken to be opened. 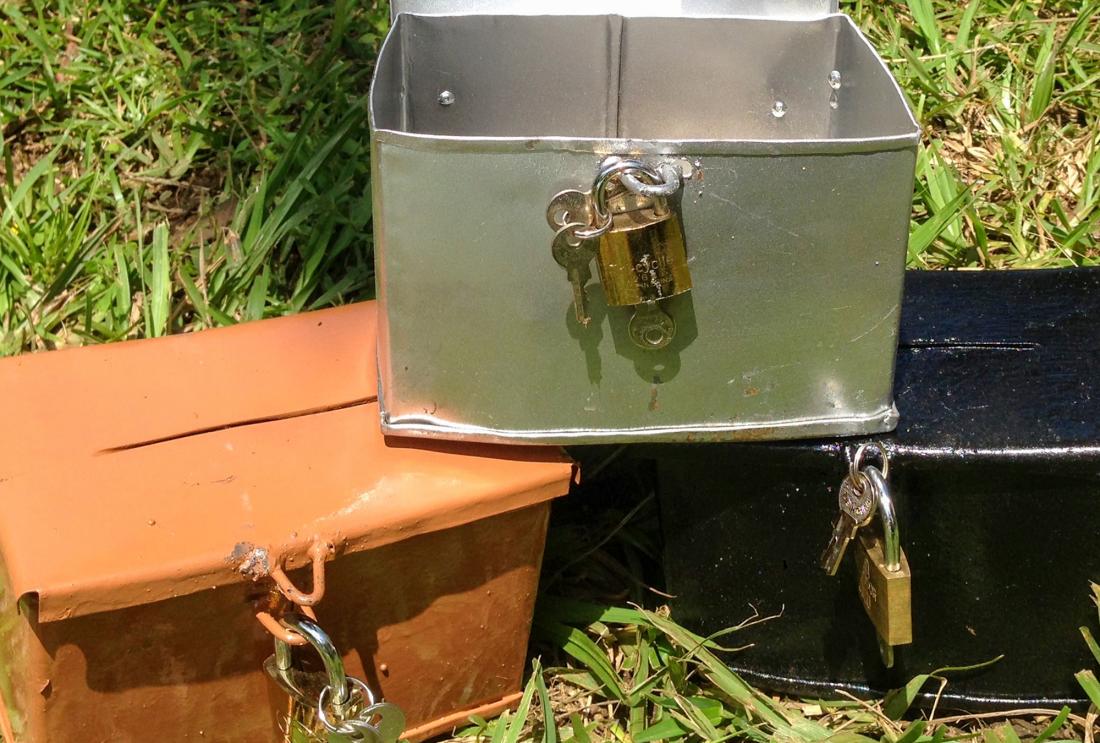 Researchers provided one or more lockboxes to small entrepreneurs to evaluate whether access to single or multiple lockboxes led micro-entrepreneurs to save more, in addition to effects on other financial and business outcomes. The metal lockboxes had a deposit slit on the top and a latch that could be locked. Recipients also received a passbook to record withdrawals and deposits, tracking the balance without requiring individuals to open the box. Recipients of the lockboxes labeled each box to correspond to specific purposes by writing their savings goal on a sticker which was then attached to the lid on the inside of the box. Lockboxes were also painted different colors to help individuals who received multiple boxes to differentiate them.

Researchers measured outcomes via high-frequency surveys (administered only to a random half of the sample) and two monitoring surveys (administered to the full sample), which were all conducted over the phone. All respondents received a simple phone to enable phone interviews. High-frequency surveys consisted of twice-weekly calls asking about business outcomes over the past three-four days for business outcomes, and over the past seven days for more rare outcomes, such as illnesses, transfers, withdrawals, and loans. Monitoring surveys included the same questions as the high-frequency surveys, as well as questions spanning a longer time period. Researchers found similar results across both survey methods for most outcomes.2 Researchers also visited a sub-sample of participants to check the lockboxes and verify the savings balance. Data from these checks was similar to self-reported data, suggesting that participants accurately reported data.

Both single and multiple lockboxes led entrepreneurs to save more, increase hours in farming, work less in their main business, spend more, increase lending credit to customers, and give more transfers to friends and family. However, individuals given multiple lockboxes saved more than those given a single box. These results suggest that lockboxes may be an effective solution to addressing financial exclusion in low-income countries, given the persistent challenge of accessing formal financial services.

The vast majority of individuals used the lockboxes: Almost all individuals (99 percent) offered lockboxes took at least one. However, individuals offered multiple boxes did not take them all: 24 percent of those offered multiple boxes took only one, 33 percent took two, and 42 percent took all three. Similarly, nearly all individuals used a box at least one once, and 92 percent used a box at least five times. These take-up and usage rates were far higher than in similar studies, for example, evaluations in Malawi providing free savings accounts or promoting savings accounts for tobacco farmers, which usually have rates below 20 percent. Usage, measured as the average amount deposited in the last five to six months, was US$117 for individuals with a single lockbox and US$156 for those with multiple lockboxes. These deposits represented sizable amounts given that daily income was around US$2.50 for these participants.

Individuals offered the lockboxes worked less in their main business and increased investments in farming. Business owners offered a single lockbox were 8 percentage points less likely to work, compared to 82 percent of those in the comparison group, and worked fewer hours. However, there was no impact on labor for individuals offered multiple lockboxes. Access to any lockbox doubled the likelihood of working on a farm from an average of 6 percent for the comparison group. Participants offered any lockbox also increased spending on agricultural inputs and were more likely to buy and rent land. This reallocation of labor away from the main business and increased investment in farming suggests that entrepreneurial activity is partly meant to generate enough income for subsistence and people potentially work too much.

Lockboxes increased household spending, credit extended to customers, and the likelihood of giving to friends and family. Overall, access to any lockbox increased total expenditure by 13-20 percent from an average of US$27-34 for the comparison group. Increases were concentrated in spending on school expenses, staple foods, and personal and household expenses, as well as holidays. Individuals offered any lockbox also increased the amount of credit offered to customers, suggesting greater availability of cash with more savings. This may have also been a way of expanding one’s business in a highly competitive sector. Individuals offered the lockboxes were also more likely to give gifts, loans, and payments to friends and family.

Aggarwal, Shilpa, Valentina Brailovskaya, and Jonathan Robinson. "Cashing In (and Out): Experimental Evidence on the Effects of Mobile Money in Malawi." Final Working Paper, January 2020.

1.
Demirgüç-Kunt, Asli, Leora Klapper, Dorothe Singer, Saniya Ansar, and Jake Hess. 2018. “The Global Findex Database 2017: Measuring Financial Inclusion and the Fintech Revolution.” Washington, DC: World Bank. https://doi.org/10.1596/978-1-4648-1259-0.
2.
While most results were similar between the high-frequency phone and monitoring surveys, there were different results on some outcomes. For example, there was an increase in school expenses based on the high-frequency phone surveys, but no impact based on the monitoring surveys. Researchers suggest that the high-frequency phone surveys measured more common, smaller school expenses, like school supplies, which are easier to change. The monitoring survey measured school fees and tuition, expenses that are harder to change, especially in Malawi where primary education is free.