Social Networks and the Decision to Insure in China

Financial decisions often involve complexities that individuals may have difficulty understanding based on their own education, information, and experience. Social networks can help ordinary individuals make these complex decisions: people can acquire knowledge about financial product benefits from their friends, be influenced by their friends’ choices, and/or learn from others’ experiences with a product. Researchers examined the ways in which information dissemination within social networks affected farmers’ adoption of a weather insurance product in rural China. Results suggest that social networks had a significantly positive effect on insurance take-up, driven by the diffusion of knowledge about insurance. These effects were larger when people who were the first to receive financial education were more central to the social network.

Financial decisions often involve complexities that individuals may have difficulty understanding based on their own education, information, and experience. This complexity can deter low-income individuals or poorly educated individuals from taking up financial products such as insurance that could help mitigate some of the vulnerabilities of poverty. Social networks can help ordinary individuals make these complex decisions: people can acquire knowledge about financial product benefits from their friends, be influenced by their friends’ choices, and/or learn from others’ experiences with a product. However, there is very little rigorous evidence on the role of social networks in financial decision-making. Researchers examined the ways in which information dissemination within social networks affected farmers’ adoption of a weather insurance product in rural China.

Rice is the most important food crop in China, with nearly 50 percent of the country’s farmers engaged in its production. In order to maintain food security and shield farmers from negative weather shocks, the government-affiliated People’s Insurance Company of China (PICC) developed the country’s first rice production insurance policy in 2009. The government-subsidized insurance policy protected farmers from crop yield losses of 30 percent or more resulting from natural disasters such as floods, extreme temperatures, and drought.

In 2010, the program was expanded to 62 counties in Jiangxi province, where rice production is the main source of income for most farmers and crop failure is frequent. Among the farmers in this evaluation, rice accounted for 73 percent of total household incomes, and 63 percent of households had experienced some type of natural disaster last year, resulting in an average yield loss of 28 percent. Because the insurance policy was new to the region, farmers and even local government officials in Jiangxi had a very limited understanding of weather insurance products. 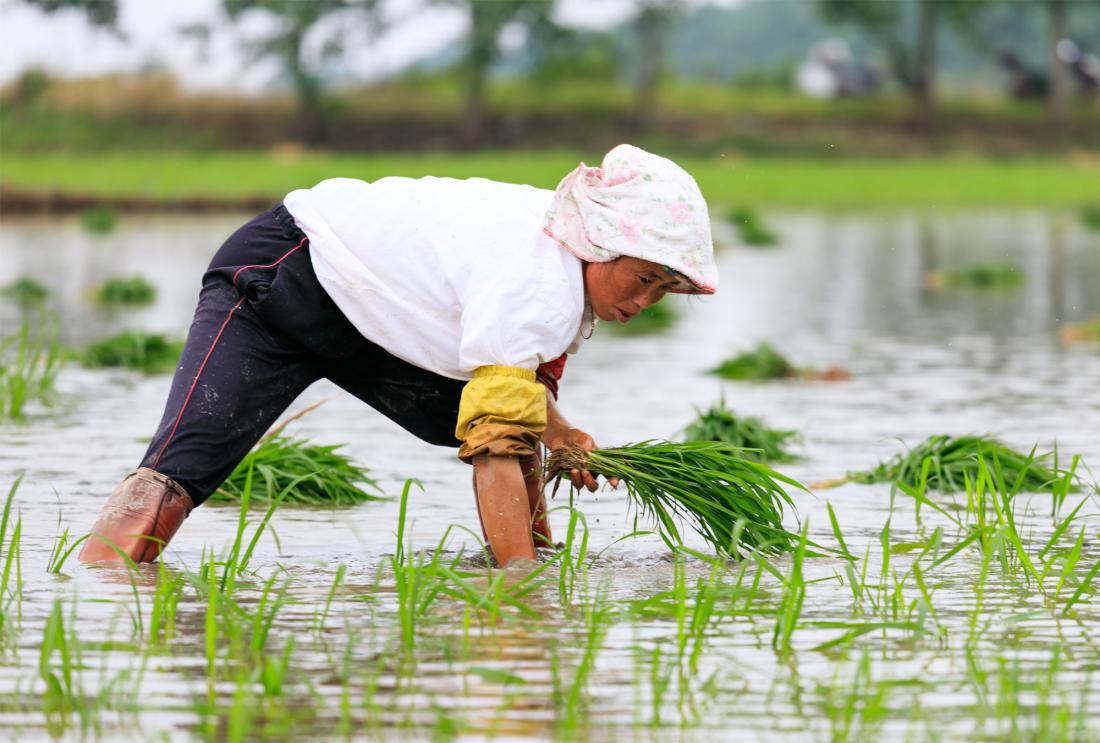 Researchers conducted a randomized evaluation to measure the effect of social networks and information on farmers’ decisions to take up the weather insurance. Partnering with the People’s Insurance Company of China (PICC) during the 2010 expansion of the program in Jiangxi, they provided two types of information sessions to introduce farmers to the new insurance product: a simple session during which PICC agents explained the insurance contract, and an intensive session that covered all information provided during the simple session plus financial education to help farmers understand how insurance works and its expected benefits.

In addition to the randomization at the household level, the villages were also randomly divided into two groups. In Type I villages, all households were offered insurance at the same price of US$0.53 (3.6 RMB) per mu (0.067 hectares.) In Type II villages, households were randomly offered one of seven different prices ranging from US$0.27 (1.8 RMB) to US$1.08 (7.2 RMB). Type I villages were further divided into two subgroups; in one subgroup of villages, the default option for all session participants was to buy the insurance and farmers needed to sign off if they did not want to purchase the insurance. In the other subgroup, the default option was to not buy and farmers needed to sign up to buy the insurance.

To collect data, researchers administered two surveys: a social network survey conducted before the information sessions to document the number and strength of relationships among farmers, and a household survey conducted after households made their insurance purchase decisions to capture demographic information and farmers’ financial understanding.

Participation rates in the information sessions were high—more than 90 percent of invited households attended their assigned session—and across the whole sample, 44 percent of farmers signed up for the insurance. Receiving financial education significantly increased take-up rates. Participants in first-round intensive sessions were 14 percentage points (40 percent) more likely to sign up for insurance than participants in the first-round simple sessions. Interestingly, there was a much smaller difference in take-up rates between the intensive and simple sessions in the second round, but overall take-up rates were higher in the second-round than first-round sessions. These results suggest that, during the three days between the two rounds, substantial information was communicated from first-round to second-round participants.

The social network effect on take-up was strong. For second-round participants to whom no additional information was revealed afterwards, having one additional friend attend a first-round intensive session increased a farmer’s take-up rate by 5.8percentage points, equivalent to more than 42percent of the direct financial education effect. Having one additional strongly linked friend (a friend with a direct relationship with the farmer) increased farmers’ take-up rates by 8percentage points compared to farmers who did not have a strongly linked friend. However, weakly linked friends, had no impact on farmers’ take-up behavior.

Farmers who had more friends exposed to financial education were also less sensitive to insurance prices. Results demonstrated that, among second-round participants in Type II villages, increasing the price of insurance by 1 RMB decreased take-up by 12.3percentage points; but the effect of having one additional friend who attended a first-round intensive session was equivalent to a 13percent decrease in the average insurance premium.

These results demonstrate that providing financial education to a subset of farmers has large and positive spillover effects on other farmers through diffusion of insurance knowledge through social networks. This suggests that providing financial education to a small subset of farmers can be an effective strategy for increasing the adoption of a new insurance product in similar contexts.