The National Assembly of Vietnam (VNA) is the country’s main national law-making body. The VNA’s approximately 500 district-elected delegates serve five-year terms and convene biannually to consider draft legislation, which is generally introduced by ministries of the executive branch. While individual delegates cannot introduce new legislation, delegates can propose changes and critique bills during VNA meetings.  Prior to debates, delegates have the opportunity to meet other delegates from different provinces in private caucuses to consolidate viewpoints, determine local priorities, and organize speaking opportunities for the debates themselves. While campaigning and opposition parties are forbidden, voters can select their representatives among the candidates nominated either by the central party or by local party representatives. In this study context, many legislators expressed their interest in receiving information about their constituents’ preferences and acting upon them.

Researchers in this study evaluated legislator responsiveness to constituent preferences about a proposed Vietnamese Law on Education (VLoE), which was debated by the legislative branch in May 2018. The VLoE addresses all aspects of the educational system from preschool through vocational and continuing education, affecting families as well as the business community.

In partnership with the Mekong Development Research Institute, the Vietnam Chamber of Commerce and Industry and the Institute of Public Policy and Management (IPPM) within the National Economic University, researchers conducted a randomized evaluation to test the impact of targeted information about citizens and firms’ preferences on legislator responsiveness.

Researchers randomly assigned 470 VNA delegates to one of three groups. Two of these groups received printed infographics from the IPPM, an official government-funded research institute:

IPPM shared these infographics by mail in May 2018, prior to the delegates’ VNA meetings and floor debate on the new proposed law. To create the infographics, researchers collected citizens’ and firms’ opinions on education factors, such as infrastructure, personnel, and financial transparency, from annual nationwide surveys conducted by the Vietnam Provincial Governance and Public Administration Performance Index (PAPI) and the Vietnam Provincial Competitiveness Index (PCI). The infographics tended to show that a large proportion of citizens and firms were dissatisfied with the quality of education in their province and were seeking policy improvements. In addition, the infographics made indirect reference to specific articles of the VLoE scheduled for debate in June 2018.

Researchers used surveys and debate transcripts to measure delegates’ debate preparedness and participation. Researchers assessed whether delegates increased their responsiveness by measuring their willingness to speak in caucuses, debate floors, and query sessions with the Education minister, as well as the content of their speeches. 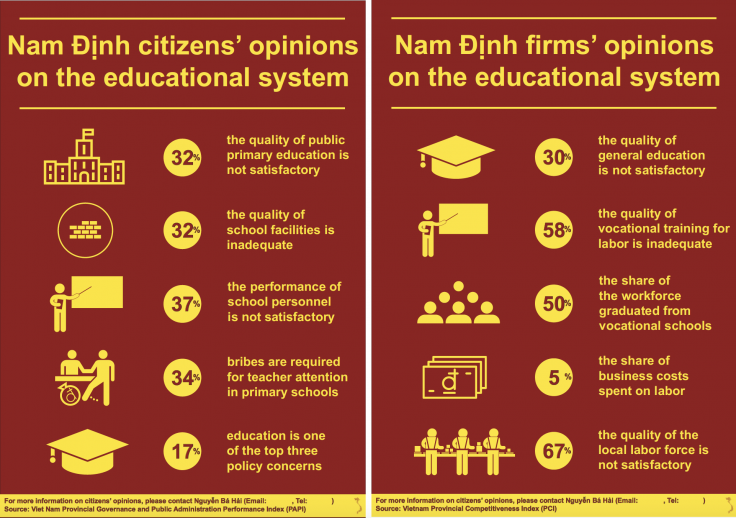 Sample infographics for citizens and firms.

Overall, these results suggest that legislative bodies – even in authoritarian settings – can respond to the preferences of citizens when they are given information about their opinions. This effect was stronger when the information was shared among other delegates.

Researchers are conducting a follow-up evaluation related to the new Vietnam Labor Code to further identify the reasons why delegates appear to be responsive to the information provided to them.