Providing cash grants to low-income households without any strings attached has been proven to have various benefits on the lives of those who receive the transfers, but less is known about how this sudden influx of income affects the local economy and people living nearby. In western Kenya, researchers evaluated the impact of unconditional cash transfers, provided by the organization GiveDirectly, on household well-being and local economic activity. The transfers led to large increases in consumption and assets for recipients, as well as large positive impacts on consumption for non-recipient households and on revenue for firms. These results counter concerns that large cash transfers may harm those who do not receive them.

Previous research has found that providing unconditional cash transfers, or cash grants without any strings attached, to low-income households can lead to positive welfare benefits for recipients, including increased income, improved psychological wellbeing, and greater empowerment for women. There is great interest in these types of programs, as many low- and middle-income countries have implemented unconditional cash transfers as a tool for poverty alleviation. Yet little is known about how the sudden influx of income from the transfers affects the local economy, including for those who do not receive the transfer. Does the injection of funds stimulate wider economic activity or change the price of goods? Do the positive impacts experienced by transfer recipients spill over to non-recipients? Or alternatively, are there economic or psychological consequences for non-recipients?

The NGO GiveDirectly, the implementing partner in this study, provides large, unconditional cash transfers to poor households in rural Kenya. While GiveDirectly has worked in Kenya since 2011, this study occurred in areas where the NGO has not worked before: three rural sub-counties of Siaya County in western Kenya that border Lake Victoria. Though rural, the area is relatively densely populated with 396 people per square kilometer compared to a national average of 91 people per square kilometer. The main national road runs through this area, likely helping to integrate it into the national, regional, and global economies.

On average, villages in the study consisted of 100 households, and households composed of 4 members, including 2 children. Nearly all (97 percent) households were engaged in agriculture, with some also engaging in wage work and self-employment (60 and 45 percent respectively). 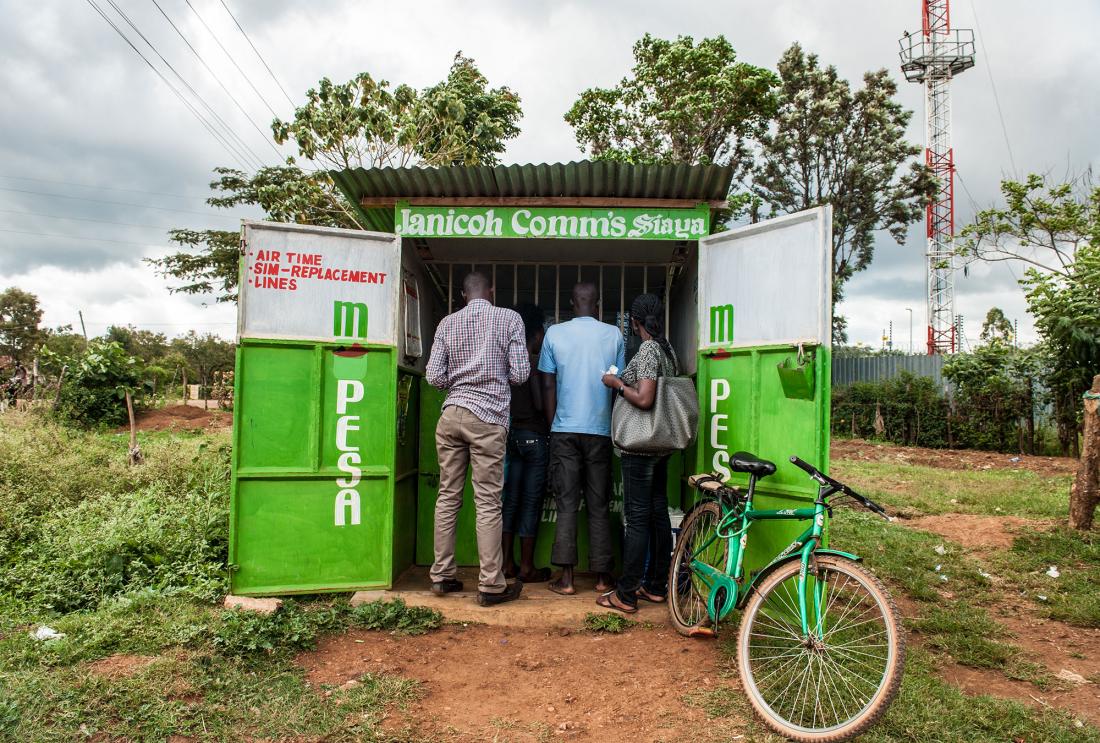 Researchers partnered with GiveDirectly to evaluate the impact of unconditional cash transfers on household welfare, as well as on the local economy. GiveDirectly provided eligible households with a series of three transfers totaling KES 87,000, or US$1,000 delivered through the mobile money platform M-Pesa. To be eligible for the transfers, households had to live in a house with a grass-thatched roof. The transfer amount was large, equivalent to 75 percent of recipient household’s annual spending. This was also a large influx of cash to the local economy; the total amount GiveDireclty distributed was roughly equivalent to 17 percent of annual Gross Domestic Product (GDP) for areas receiving the transfers. This was a one-time program, as GiveDirectly did not provide additional financial assistance to households after the final transfer.

From mid-2014 to early 2017, researchers conducted four types of surveys on: household financial physical, and mental well-being; business performance; changes in market prices; the provision of local public goods. Household surveys occurred one to two months before the distribution of any transfers and around eleven months after the last transfer. Similarly, researchers surveyed business and enterprise owners at baseline and endline. Researchers also collected monthly data on the prices of goods in local markets to assess if prices changed as an effect of the transfers.

Overall, cash transfer recipients received and spent most of the transfer, leading to higher revenues for local businesses. This rise in demand, in turn, also increased income for households who did not receive the transfer, leading them to also spend more. These findings do not substantiate concerns that large cash transfer may lead to adverse consequences for non-recipient households. Rather, there were large positive effects for households both receiving and not receiving the transfer, as well on the local economy.

Impacts on transfer recipients: Eighteen months after starting to receive transfers, households reported higher expenditure and more durable assets than comparison households. The transfers likely facilitated increased spending. Recipient households reported spending US$293 in purchasing power parity (PPP) more than households eligible for the transfer (but did not receive) in comparison villages, a 12 percent increase over US$2,537 PPP for comparison villages in the low-saturation group. Likewise, assets increased by US$ 174 PPP from an average of US$724 PPP for eligible households in the comparison group (a 24 percent increase). These results were consistent with previous findings of unconditional cash transfer programs.

Impacts on the local economy: Businesses in both treatment and comparison villages experienced large increases in revenue. From an average of US$758 PPP for comparison villages in the low saturation group, revenues increased by US$348 PPP per household in treatment villages and by US$231 PPP in comparison villages (a 46 and 30 percent increase respectively) Gains in revenue were concentrated in the retail and manufacturing sectors. Enterprises in areas that received more cash transfers experienced meaningful gains in total revenues, in line with the increase in household expenditures. Revenues increased without noticeable changes in firm’s investment behavior (beyond a modest increase in inventories). These results suggest that increased demand induced by the transfers drove expansion of enterprise activity rather than by increased investment.

Impacts for non-recipients: Despite not receiving transfers, annual spending by non-recipient households was 13 percent higher than the comparison group, an increase of US$ 334 PPP from US$2,537 PPP. This gain was roughly the same as that experienced by households receiving the transfer over the same 18-month period. Increased spending in non-recipient households was likely due to more local firms’ owners and workers earning more income. Wage earnings increased by US$182 PPP from an average of US$495 PPP for comparison households (a 37 percent increase).

Impacts on social well-being: Households receiving the transfer had higher levels of psychological well-being, food security, education, and security, as measured by an index of survey questions. Furthermore, there were no negative effects on non-recipient households. Though there are concerns about cash transfer programs doing harm to non-recipients, this was not the case in this setting. One possible exception, however, is inequality: researchers estimated that the positive gains for non-recipient households, especially wealthier ones, were so large that inequality within a village may have slightly increased.

In sum, while there are concerns about the possibility of large-scale cash transfer programs leading to adverse consequences for non-recipients, these findings counter those concerns. Non-recipient households increased their spending and businesses in areas receiving the transfer experienced higher revenue. Additionally, there was little to no price inflation and no negative effects in terms of domestic violence, health, education, and the provision of local public goods.

6 result(s)
Researchers Find A Remarkable Ripple Effect When You Give Cash To Poor Families
How To Fix Poverty: Why Not Just Give People Money?
Is Guaranteed Income for All the Answer to Joblessness and Poverty?
Early insights from the first field test of universal basic income
What a $25m grant will mean for cash transfers to the poor
There are no silver bullets: the way we can achieve 169 targets