Health Care Communities Can Count On

Similar to the pre-Ebola period, only community monitoring improved health outcomes during the Ebola crisis. Community monitoring reduced Ebola-related deaths from one patient death for every four Ebola cases to about one in ten. 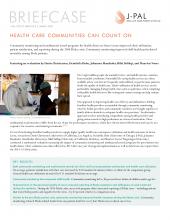