Countries recovering from conflict are often marked by devastated social ties and low levels of trust across groups, putting them at risk of relapsing into violence and instability. In such contexts, rebuilding and strengthening coexistence between groups has been a key policy goal for achieving sustainable peace. Social cohesion has been associated with good governance and economic development, yet there remains limited understanding of how best to build it.

The “contact hypothesis” asserts that contact between groups can reduce prejudice and bias when it is cooperative, places participants on equal footing, is endorsed by communal authorities, and is characterized by a common goal. In line with this theory, previous research suggests that grassroots organizations, like sports teams or trade unions—where cooperation is mutually beneficial—can help build social trust between conflicting groups.

Despite the potential of intergroup contact, there is little rigorous evidence about whether it can build lasting real-world behavior change in areas affected by conflict and ethnic violence. Evidence on the extent to which this tolerance can extend outside the intervention, or spillover to others in the community, is likewise sparse. To test whether positive and cooperative contact can improve relations across groups in post-conflict communities, Salma Mousa (Yale) randomly assigned displaced Christians either to play with Muslims, or fellow Christians, through a two-month soccer league in an ISIS-affected area of Iraq. 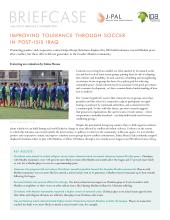