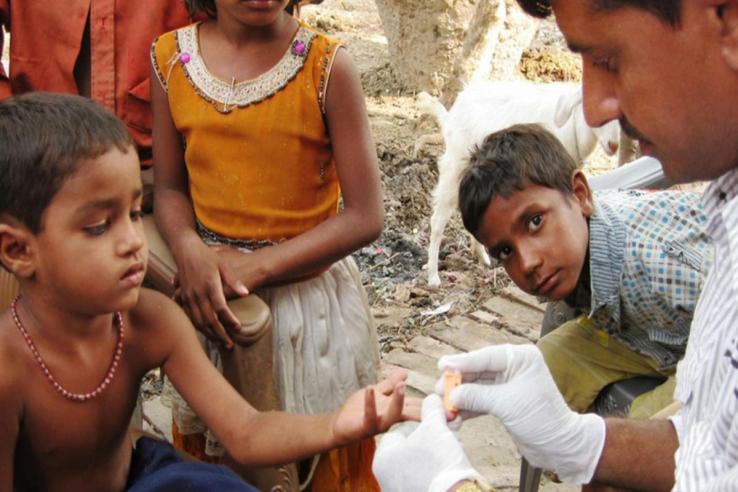 2017 marks J-PAL South Asia’s tenth anniversary and a significant milestone in J-PAL’s work to reduce poverty through evidenced-informed policymaking. Since its inception, J-PAL South Asia has championed poverty alleviation through efforts like its institutionalized government partnership in Tamil Nadu and its support for evidenced-backed programs like the “graduation approach” to build stable livelihoods for the ultra-poor. This year, we are building on this innovative work with the launch of the Cash Transfers for Child Health (CaTCH) Initiative.

While child health has improved significantly over the past two decades, with mortality of children under five more than halving in India, there are still significant challenges. Of the nearly 16,000 under-five deaths that happen each day worldwide, one-fifth of these occur in India. Access to cheap and effective treatments for serious cases of diarrhea and pneumonia could prevent more than half of these deaths. However, financial and liquidity constraints, lack of information, and procrastination are barriers that may prevent parents from investing in their child’s health.

J-PAL South Asia launched the Cash Transfers for Child Health (CaTCH) Initiative in response to these challenges. CaTCH is an India-focused research initiative funded by the Bill & Melinda Gates Foundation that aims to identify ways to overcome these barriers by generating rigorous policy-relevant evidence on the design and delivery of cash transfer programs in India.

Among the policymaker’s toolkit of responses, cash transfers have long provided a robust answer to overcoming constraints in investing in child health. Transfer programs can take many forms: On the demand side, conditional cash transfers, for example, may provide families with a monthly stipend in exchange for obtaining preventive medical care, or may provide a one-time payment to compensate parents for expenses related to bringing their child to a vaccination clinic. In contrast, unconditional cash transfers may supplement a family’s income with a monthly stipend while requiring no special conditions for payment. On the supply side, “pay for performance” programs provide bonuses to health workers who meet certain targets for indicators like volume of patients or number of vaccinations.

Initially gaining traction and popularity in Latin America with programs like Mexico’s Progresa (now Prospera), national and state governments in India have set up a multitude of cash transfer programs to support poverty alleviation efforts. Despite their increasing prevalence, the quality of evidence regarding how to design these programs has not kept pace with their expansion. CaTCH hopes to shed light on open questions, including: Can unconditional transfers deliver the same results as conditional transfers, at a lower cost? What is the role of new technologies in improving conditionality and implementation of cash transfers?

Over the four-year lifetime of the initiative, CaTCH hopes to fill the evidence gap and answer some of these questions by funding pilot studies and full-scale randomized evaluations in India. This long-term commitment to generating rigorous evidence will directly inform future program design, both in India and globally.