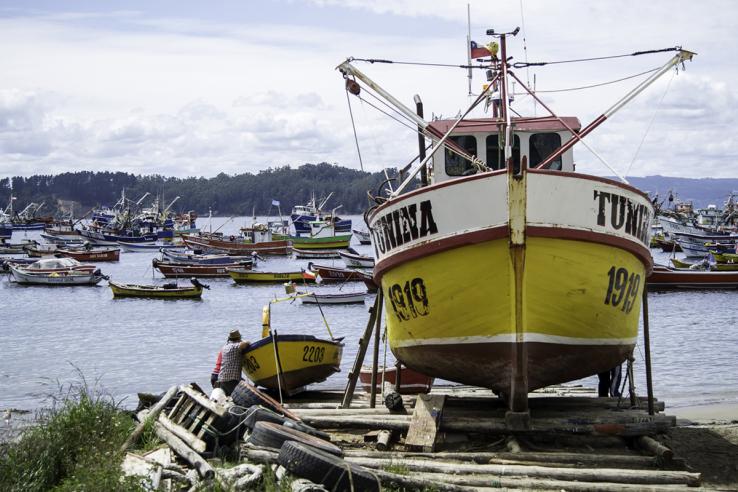 In Chile, overfishing of Pacific Hake presents a formidable environmental and economic challenge. The practice can damage marine ecosystems, create economic strain on local markets, and threaten the nutritional and consumption needs of local populations. J-PAL affiliated researcher Mushfiq Mobarak (Yale University) and co-author Andres Gonzalez-Lira (UC Berkeley) partnered with the Chilean National Fish Service (Sernapesca) to evaluate different strategies to ensure compliance with a seasonal fishing ban on Pacific Hake. The randomized evaluation found that both consumer information campaigns and vendor enforcement strategies were effective in reducing the availability of illegal hake in local markets. Informed by the results of the evaluation and cost-effectiveness analysis, the Chilean National Fish Service expanded the consumer awareness campaign evaluated in the study and adapted its enforcement tactics.

Despite government enforcement efforts, many marine species in Chile have been overexploited and are at risk of collapse.

Globally, 31.4 percent of the world’s fish stocks had been overexploited to biologically unsustainable levels, according to a 2013 estimate.1 The practice of overfishing, the act of harvesting aquatic species at a rate faster than the species can reproduce, can be a consequence of ecosystem degradation and destructive fishing methods, as well as shifting human consumption patterns and inefficient regulation.In Chile, illegal harvesting of fish species such as Pacific Hake has resulted in the over-exploitation of fish populations. This practice has in turn damaged marine ecosystems, created economic strain on local markets, and threatened human nutritional and consumption needs. Over the past twenty years, the Chilean government has passed numerous regulations to protect at-risk species, including implementing restrictive fishing quotas and bans on harvesting and selling fish during breeding seasons. However, many fish populations continue to be at risk—as of 2015, 72 percent of Chile’s fish species were rated as overexploited or collapsed.2

Implementation and enforcement of fishery regulations have proven difficult due to restrictive programmatic costs and poor regulatory capacity. The majority of fishing in Chile is carried out by small-scale fisherman who operate informal and geographically dispersed businesses, making it difficult to monitor activities. An additional challenge facing the government is the ability of fishermen and vendors to find loopholes and elude regulators, thus undermining the effectiveness of regulatory activities and allowing illicit businesses to profit. Furthermore, there is a general lack of consumer awareness of government regulations of the fishing industry.

In May 2015, officials from the Chilean National Fish Service attended a project incubator course run by J-PAL’s Latin America & Caribbean (LAC) office and the budget office of the Chilean Ministry of Finance (DIPRES). Following the course, the officials were interested in quickly developing and evaluating different regulatory strategies. They partnered with J-PAL affiliated researchers to test the relative impacts and cost-effectiveness of consumer-targeted information campaigns and vendor-targeted enforcement strategies in reducing illegal hake harvesting and sales.

Researchers randomly assigned organized groups of fish vendors, known as circuits, to one of four groups:

Groups receiving the enforcement treatment (groups 2 and 3), were further randomly assigned to receive enforcement regimes that were either predictable or unpredictable, or high or low intensity.

The information campaigns and enforcement reduced hake availability and consumption by over 30 percent. The information campaign led more consumers to be aware of the ban and to report purchasing fewer illegal hake. Enforcement visits that occurred on unpredictable schedules led to substantial reductions in illegal hake in local markets. However, anticipated and more frequent enforcement visits did not reduce sales of illegal hake. Instead, vendors adopted tactics to avoid sanctions, such as hiding fish or claiming hake had been caught and frozen before the fishing ban.

The researchers also collected data from the Chilean National Fish Service on the full administrative costs of implementing both strategies in order to conduct a comparative cost-effectiveness analysis. They found that the information campaign was more cost-effective in reducing illegal hake sales than the enforcement strategy.

Based on the research, the Chilean National Fish Service expanded the information campaigns and integrated unpredictable enforcement visits into its strategy.

The randomized evaluation convinced the Chilean National Fish Service of the effectiveness of the information campaigns, which they continued and expanded in subsequent years. Informed by the results of the evaluation and cost-effectiveness analysis, the agency has continued the information campaign during the seasonal Hake fishing bans since 2016.3

The biggest accomplishment was to have an objective statistic to see how effective the information dissemination was relative to the audits. … The cost-effectiveness study carried out by the researchers was especially useful in convincing people of the value of this other strategy of information campaigns.

The Chilean National Fish Service also changed the way it deployed enforcement. They leveraged the evaluation findings and the rich compliance data that resulted from the evaluation to adapt their enforcement strategy to more unpredictably target the most strategic markets.

We are using the georeferenced data from the evaluation, which tells us which ferias [fish markets] are more or less compliant with the regulations. This allows us to distribute our resources in order to manage risk more effectively, focusing our efforts on the places with least compliance.

The Chilean National Fish Service has applied research insights from the evaluation to design similar information campaigns for other overexploited species. In 2018, the agency launched a new website and hashtag, #salvavedas, to promote the protection of twelve overexploited marine species. The agency has also expanded their information campaign strategy, distributing posters and fliers and launching a large social media and local outreach campaign for six species: abalone, croaker, hake, octopus, southern hake, and sea urchin.

Officials at the Chilean National Fish Service continue to experiment with consumer information campaigns and interventions following the J-PAL partnership. They have piloted a new program called Sello Azul (Blue Seal), which provides a certification to restaurants selling legally acquired seafood, allowing consumers to choose to patronize those locations. The program has since expanded, now covering both restaurants and supermarkets chains.