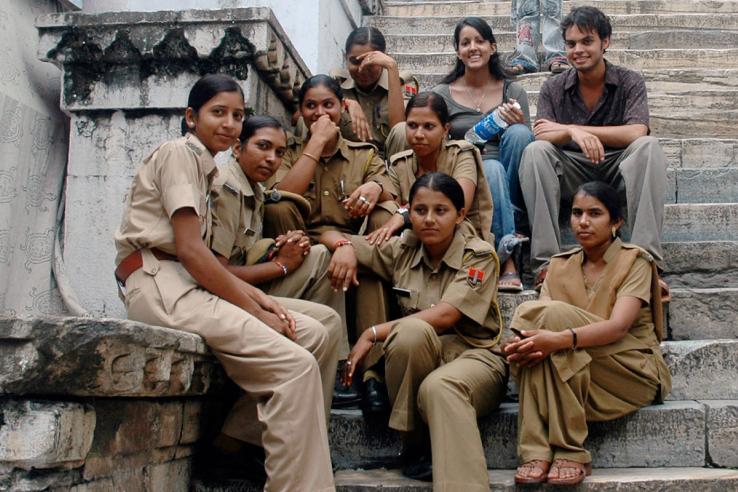 Police in India are commonly perceived to be unfair, corrupt, and inefficient. Research by J-PAL affiliates Abhijit Banerjee (MIT), Raghabendra Chattopadhyay (Indian Institute of Management), Esther Duflo (MIT), and Daniel Keniston (Yale University) has shown that training in soft skills such as communication, stress management, and leadership can facilitate community interaction and improve public perceptions of police performance. Following the evaluation, elements of the training were scaled up across the police force in Rajasthan and incorporated into police training curricula across India.

In India, both police morale and public perceptions of police performance are low.

Professional policing can promote the rule of law, support economic growth, and improve the lives of people living in low-income communities by deterring local crime. However, in India, the police are often perceived as corrupt, ineffective, and brutal, which may stem from a number of systemic, organizational, and behavioral challenges. In Rajasthan, citizen surveys revealed that the public viewed the police as corrupt, lazy, and unfair. Officers themselves reported feeling unsatisfied, overworked, and neglected by the system. They often lack the adequate resources, skills, and aptitude necessary to effectively perform their duties, yet police reform is rarely prioritized.

The Rajasthan police, in collaboration with J-PAL researchers, tested the effects of improved police training on measures of police efficiency and local perceptions of officer performance. In response to baseline survey data that measured public perceptions of crime and police performance, two training modules were evaluated.

First, investigating officers received a week-long training session on scientific techniques of investigation at the Rajasthan Police Academy in Jaipur. Second, police personnel of all ranks in police stations received training on “soft skills” such as communication, mediation, leadership, stress management, attitude change, and other personality development skills that facilitated community interaction. To observe whether it was necessary to train all police station staff, or if a few change agents could lead to the desired impact, researchers randomly assigned the proportion of officers in a police station who received training.

Both types of training—investigation and soft skills—led to improvements in the quality of police work and public satisfaction. In police stations where all staff were trained, victim satisfaction increased by 30 percent, while fear of the police decreased by 17 percent. Investigation quality of trained police officers also improved. However, no trickle-down effects were observed: the increase in satisfaction was proportional to the number of trainees within a police station.

For more about this project, see the evaluation summary.

Based on evaluation findings, elements of the training program were incorporated into police training curricula across India.

Following the evaluated pilot program, reforms were introduced in Rajasthan to provide training in soft skills—communication, team management, leadership, and other personality development skills—to nearly the entire police force, which numbered some 100,000 officials in 2016. Similarly, trainings in scientific investigative methods were incorporated in the syllabi for all inspectors, sub-inspectors, and assistant sub-inspectors.

In 2013, the 32nd National Symposium of Heads of Police Training Institutions listed soft skills training as a priority for all policemen across ranks. Furthermore, the Bureau of Police Research and Development (BPRD)—a government body under the of Ministry of Home Affairs in India, the apex body for policy formulation of the Indian Police—has introduced a model training syllabus for constables and sub-inspectors, which includes components from the training evaluated in Rajasthan. Since then, several states have incorporated some version of these components in their own training syllabi.

The evaluation has also contributed to a change in how state governments measure crime rates. Previously, states often relied solely on reporting of crime at police stations. This measure has a serious drawback—since an officer’s performance is evaluated by the registration of crime in his or her police station, there is a natural tendency to either hide crime or not register cases in order to reduce the appearance of crime rates.

Systematic victim studies, though expensive and difficult to implement, yield more realistic data on crime levels than official police statistics because these include incidents that have never been reported to or recorded by the police. The household crime survey conducted by J-PAL affiliates for the Rajasthan police revealed that only 29 percent of crimes are ever reported. In light of the serious underreporting of crime indicated by the household crime survey in Rajasthan, the first of its kind in India, the BPRD is now considering adopting crime surveys as a formal method to measure crime.

4 result(s)
Calling the Cops? Institutional Reform in the Rajasthan Police
Telling it like it is
Class Monitors
In Rajasthan, police step on reforms road, guided by MIT