CARES Commitment Savings for Smoking Cessation in the Philippines

Despite its serious health effects, smoking is extremely commonplace in the Philippines. In 2009, 28.3 percent of Filipinos aged 15 years or older were current smokers, and 22.5 percent smoked on a daily basis. Researchers evaluated the impact of a voluntary commitment savings program that allowed individuals to deposit a self-selected amount of their own money that would be forfeited if they did not quit smoking within six months. Results suggested that individuals who were offered the program were much more likely to quit smoking.

Despite detrimental effects, people throughout the world habitually engage in damaging or inefficient habits such as smoking, eating poorly, or failing to save money. Experts believe that this is because people's preferences change over time: in the long-run an individual may wish to quit smoking, for example, but in the moment their preference for a cigarette may outweigh their desire to quit. Such behavior, known as time inconsistent preferences, may help to explain why people make inefficient choices that result in poor health or a lack of financial cushioning. Some researchers theorize that habits that have negative long-term effects can be discouraged by giving people commitment devices: contracts which constrain their future behavior, and may exact a financial penalty if they revert to bad habits. 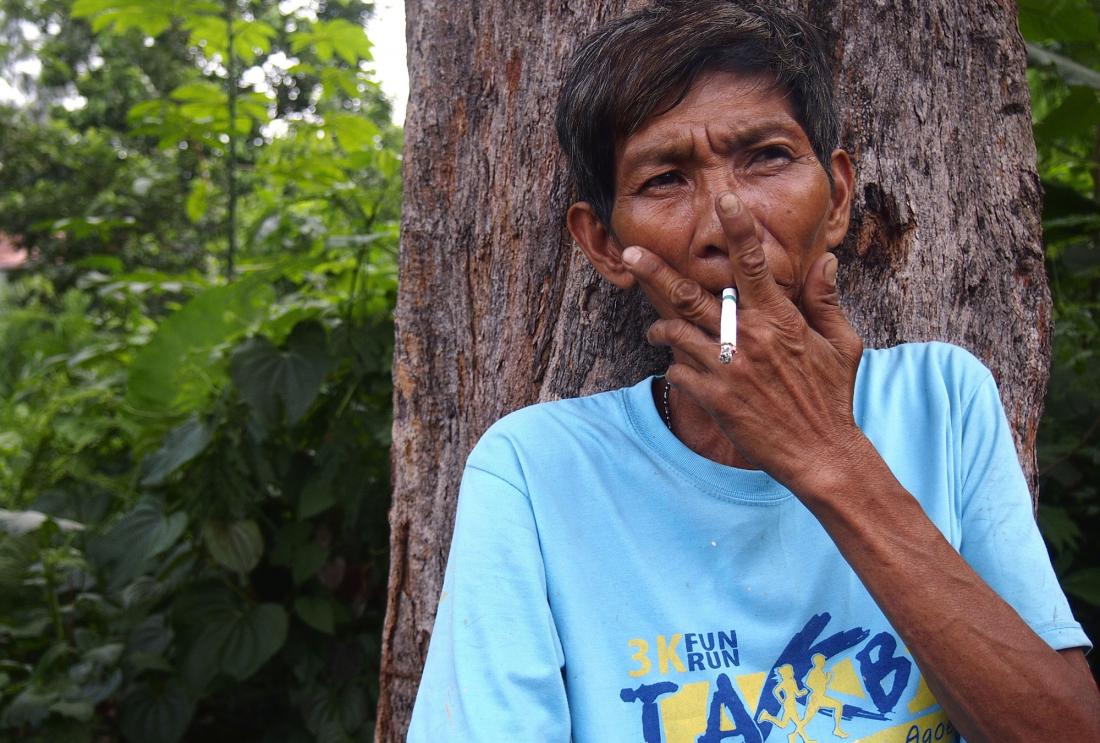 In 2009, 28.3 percent of Filipinos aged 15 years or older were current smokers, and 22.5 percent smoked on a daily basis. Photo: junpinzon | Shutterstock.com

Committed Action to Reduce and End Smoking ("CARES") is a voluntary commitment savings program. The basic design of the product allows a smoker to deposit a self-selected amount of his own money that will be forfeited unless he passes a biochemical test of smoking cessation. To enroll people in the CARES program, the Green Bank of Caraga identified regular smokers off the street and asked them if they wanted to participate in a short survey on smoking. All subjects received an informational pamphlet on the dangers of smoking, and a tip sheet on how to quit. After completing this baseline survey, subjects were randomly assigned to receive one of four offers:

Six months after the baseline survey, all survey respondents took a urine test to determine if they were still smoking. Individuals in the CARES treatment groups would receive their entire balance back if they passed the test but would forfeit it if they failed or refused to take the test. Non-clients (those assigned to the cues and comparison groups) were paid 30 Philippine pesos (US$0.60) for taking the six-month test, and all respondents were paid 30 Philippine pesos for taking another test twelve months after the baseline.

In total, about 11 percent of individuals who were offered CARES signed a contract. Individuals who reported wanting to quit, who were optimistic about quitting, and who already exhibited strategic behavior to manage their cravings (i.e., avoiding situations that made them want to smoke) were more likely to sign a contract. On the other hand, individuals who reported wanting to quit more than a year in the future, and who showed signs of being heavy smokers were less likely to sign a contract. Ninety percent of CARES clients opened with the minimum amount of 50 Philippine pesos, and 80 percent made additional contributions. The average client contributed about every two weeks, and after six months had a final balance of around 553 Philippine pesos, equal to approximately six months' worth of cigarette spending.

Individuals who were offered a CARES contract were 3.3 to 5.8 percentage points more likely to pass a urine test for nicotine after six months than those in the comparison group and were 3.4 to 5.7 percentage points more likely to pass after twelve months, a substantial effect considering that only 8.9 to 14.7 percent of comparison individuals passed the test. This represents an over-35 percent increase in the likelihood of smoking cessation compared to baseline. However, despite these large treatment effects, a surprisingly large proportion (66 percent) of smokers who voluntarily committed to CARES ended up failing to quit. Still, the results of the CARES program were far above the reductions in smoking associated with the cue card treatment, which had no effect on smoking cessation: though over 99 percent of clients offered the cue cards accepted them, fewer than half remembered the cards and knew where they had put them one year later, and only about 5 percent reported still using them to manage cravings. However, it is still not known how much of the CARES treatment effect was due to the financial commitment that all clients made and how much was due to the frequent contact that some clients had with deposit collectors.

2 result(s)
Sticking to It
Microfinance and Commitment Contracts