In response to evidence that shows that standard microcredit products do not substantially reduce poverty or improve household well-being, some microcredit providers have integrated additional services into their lending activities. For instance, components of traditional microcredit could facilitate the efficient delivery of health education. First, because many microcredit clients must attend meetings to make loan repayments, health educators can leverage these meetings to provide information. Second, as members of microcredit groups share a social network, people whose friends also receive health education may feel social pressure to act on their improved health knowledge. Additionally, while most microcredit clients are women, delivering health education to mixed-gender groups may also improve its effectiveness, as previous research has found that the involvement of both men and women in health education can increase its impact on health behaviors. Mixed-gender groups may also increase women’s empowerment and social networks by helping to integrate women into community issues.

In 2006, just prior to the start of the intervention, average annual income in Benin was US$530 and 33 percent of the population lived below the national poverty line of US$0.27 per day. Despite improvements in health infrastructure nationwide, communicable diseases pose a large health burden and accounted for more than 70 percent of deaths at the time of the evaluation. Malaria cases accounted for 40 percent of doctors’ visits and 23 percent of deaths among children under 5 years old. In addition, while HIV/AIDS rates were relatively low, there was a large gender discrepancy in knowledge: in 2006, men were more than twice as likely as women to be considered knowledgeable about HIV/AIDS (30 percent compared to 14 percent).

Association for the Promotion and Development of Microenterprises (PADME) is a nongovernmental organization that provides loans to microentrepreneurs in Benin. In 2009, with almost 49,000 borrowers and a US$35 million loan portfolio, PADME had the largest client pool in the country, of which 64 percent were women. 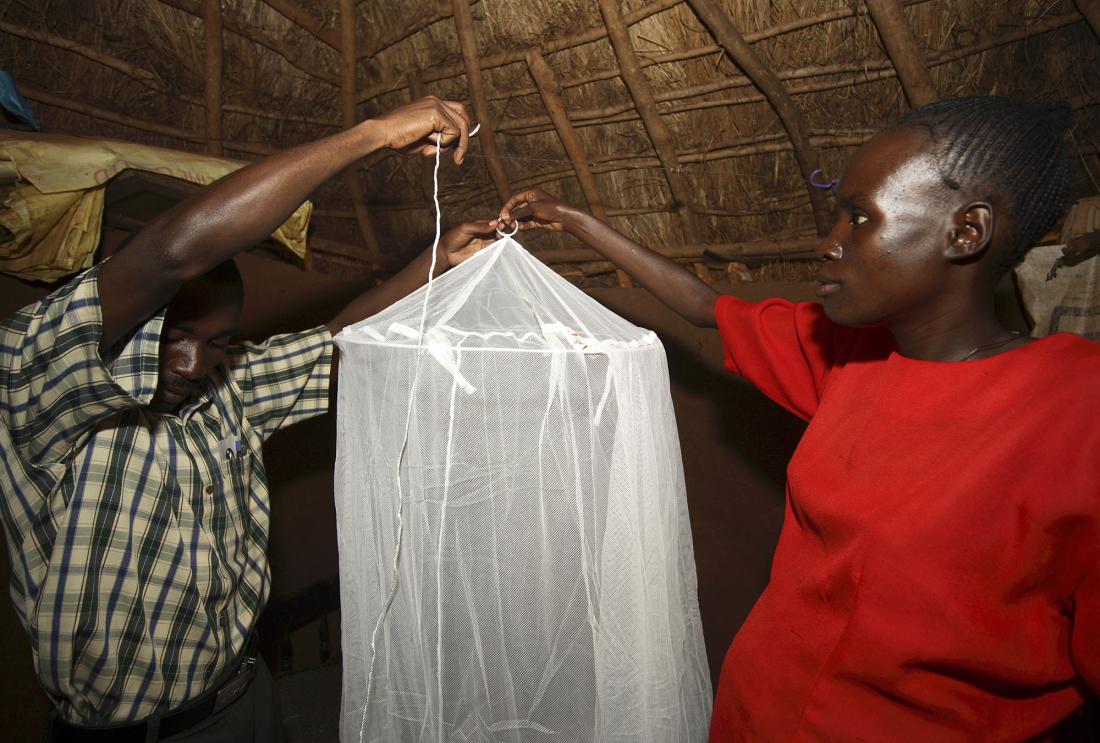 A man and woman assemble a bed net to provide malaria protection.

Researchers partnered with PADME to conduct a randomized evaluation to test the impact of health education delivered through microcredit lending groups on health knowledge, health behaviors, and social outcomes. In 2007, PADME approached Freedom from Hunger to develop a new product, Credit with Education (CwE), which combined a group loan and mandatory savings product with health education delivered via the group’s meeting structure. CwE was intended to encourage clients to adopt positive health behaviors, as well as improve loan default rates.

PADME first identified 138 villages in eastern Benin where it would expand its lending activities, and researchers randomly assigned these villages to one of four microcredit products:

In each village, PADME only offered the product that had been randomly assigned to that village. PADME worked with village leaders to identify individuals that would participate in weekly meetings and agree to group liability on their individual loans.

About two and a half years after PADME expanded its lending operations, researchers conducted a follow-up survey of about thirty women in each of 121 villages where PADME was able to offer the new product. Women surveyed by researchers lived near the lending group meeting place, and 30 percent were PADME clients. The survey measured health knowledge and behavior, as well as empowerment, social capital, and social networks.

The integrated package of group microcredit and health education led to gains in women’s knowledge of both malaria and HIV/AIDS, but those gains did not translate into improvements in health behaviors. Mixed-gender loan groups had a negative impact on women’s social capital.

Credit with Education improved women’s health knowledge but had little impact on health behaviors: Compared to women in credit-only villages, women in villages assigned to receive CwE showed improved knowledge of malaria and HIV/AIDS, but not of childhood illness danger signs. CwE had no impact on women’s health behavior except for an increase in HIV/AIDS prevention behavior, which was primarily driven by an increase in respondents’ self-reported ability to procure a condom. However, this was likely an indicator of increased perceived access rather than increased condom usage. CwE had no impact on self-reported bednet usage, past use of oral rehydration salts to treat child diarrhea or attempts to access medical treatment for children with a fever.

Mixed-gender loan groups were slightly more effective for health knowledge but had a negative impact on social capital: Education was more effective for women in the mixed-gender setting for knowledge of childhood illness. However, women in villages assigned to mixed-gender groups had lower levels of social capital than did women in villages assigned to female-only groups, as measured by membership in community groups, participation in village meetings, and influence in the village. This suggests there may be an important trade-off to consider for interventions seeking improved health outcomes and social capital through provision of public services to mixed-gender groups.

Taken together, these findings suggest that although bundling health education with microcredit can expand health education coverage and lower service-delivery costs, the approach may not be sufficient to improve health behaviors. Future research could explore whether socially motivated microfinance institutions that aim to support client health could achieve their goals better through integrating direct services beyond health education or through provision of specific health financing tools designed to influence treatment-seeking behaviors.

Informed by the results of this study, Freedom from Hunger continued to develop health financing products to more directly address the out-of-pocket health costs that may have limited treatment-seeking or health care investments. Despite the concern about negative effects on women’s social capital, however, PADME decided to pursue mixed-gender groups as this provided men and women the opportunity to self-identify for financial services and provide flexibility as to how groups could be formed.