Road accidents are a large and growing cause of death in low-income countries. Drivers have little incentives to drive safely and passengers seldom speak up when feeling endangered. In Kenya, researchers introduced a messaging campaign on matatus (local buses) to encourage individuals to stand up against reckless driving and reduce road accidents rates. Placing these stickers in the passenger area of matatus decreased insurance claims rates, average speed, and number of road accidents per year. The cost-effectiveness of the program was between US$10 and US$45 per disability-adjusted life-year (DALY) saved.

Road accidents kill 1.3 million people each year, most in low-income countries, and injure between 20 and 50 million more. By 2030, road accidents will be the fifth leading cause of death worldwide, killing more people than HIV/AIDS, tuberculosis, and malaria combined. Among individuals of 15–29 years old, road accidents are already the single largest cause of death. Previous programs aiming to reduce road accidents have sought to educate and incentivize drivers to drive more carefully, or improve traffic regulations enforcement and road networks safety features. There have been few evaluations of measures targeting passengers, especially in lower- and middle-income countries. While drivers have the most control over the vehicle and can single-handedly put those around them (matatu passengers, pedestrians, and other drivers) in danger, passengers can act together to protest against a dangerous driver, resulting in a lower number of road accidents. However, passengers may not speak up due to social norms or fear of being alone in bearing the psychic or social cost of complaining were other passengers to remain silent. Can targeted messages nudge passengers to speak up when drivers’ behavior puts them in danger and improve the safety of public bus travel?

In countries with weak enforcement of traffic regulations, drivers who adopt excessively risky behavior put other drivers, passengers and pedestrians in danger. In Kenya, about 13,500 people died due to accidents on the road in 2018 (28 road deaths per 100,000 people).1 This places Kenya in the top thirty countries with the highest rate of deaths on the road.2

Large buses and smaller, 14-seater minivans, known locally as matatus, are the primary mode transportation in the regions of Nairobi, Nakuru, and Mt. Kenya, where the study took place. Third party insurance is mandatory for public service vehicles in the country, including matatus. However, the transportation market in these regions does not reward safe driving, as matatu owners and passengers have limited power to control drivers’ behavior. Drivers often do not own the vehicle they drive and owners are responsible for its running and maintenance costs. Yet it is difficult for owners to observe the behavior of the drivers, making rewarding good driving challenging. Drivers are paid a daily wage and collect a margin of the fare charged to customers. Thus, drivers are potentially incentivized to drive recklessly to reach the largest number of customers possible while bearing no cost for the potential damage the vehicle would incur in an accident. From the passenger’s perspective once onboard, they cannot obtain a refund if they are dissatisfied with the service. Additionally, there are so many matatus in these regions that drivers remain anonymous, making it difficult for them to establish a reputation for safe driving and for passengers to seek out good drivers. 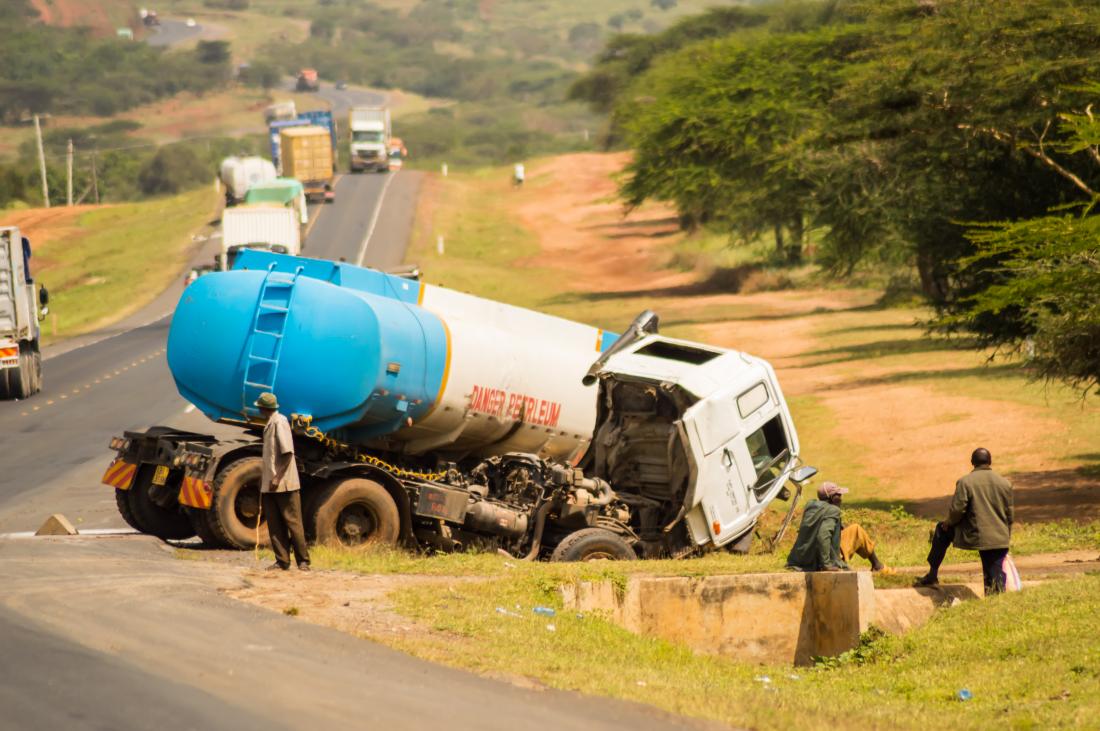 Between 2011 and 2013, researchers conducted a randomized evaluation to measure the impact of the scaled-up road safety program in Kenya called Zusha! (Swahili for “Protest!”), which used evocative stickers inside matatus to encourage passengers to speak up against dangerous driving. The study recruited 11,737 matatus while purchasing vehicle insurance. Four groups of vehicles, roughly 8,000 in total, received different kinds of stickers, and one group received placebo stickers, containing neutral messages. The sixth group of vehicles was selected to serve as comparison.

Vehicles in the four sticker groups were further randomized to receive stickers with an addition to the text encouraging passengers to act together (“Umoja ni nguvu” literally translated as “unity is power”, but closer to “together we can” in meaning). To ensure drivers would keep the stickers, all sticker groups and the placebo group were enrolled in a lottery: “winner” vehicles were periodically inspected and if found to have kept the stickers on display, drivers would be given a monetary reward equal to roughly a week’s wage.

To measure the impact of the road safety program, researchers used administrative data from insurance companies to compare the number of insurance claims filed from 2011 to 2013. Moreover, research staff measured average and maximum speed of 4,405 trips through GPS tracking, in addition to passenger behavior and driver response in the event of an accident, over the course of one year after the beginning of the program. Finally, 9,807 passengers were interviewed about their experiences on a matatu trip.

The sticker intervention reduced the rates of insurance claims of matatus, average speed, and number of road accidents per year. Text stickers were not very effective, possibly due to psychological and emotional reasons.

Speed: Average moving speed of participating matatus was reduced by 1km/h, compared to the comparison group. There was no significant impact on average maximum speed, but vehicles with certain stickers reported had a significant reduction. Stickers showing images of cars crashes were associated with a 2 km/h reduction in maximum speed, while for stickers showing injured passengers the reduction was of 1.2 km/h.

Passenger experience: Surveyed passengers reported some kind of reckless driving on 15 percent of trips and about 17 percent of passengers spoke to the driver. Across all groups, a little over half of all passenger complaints were due to trip interruptions such as breakdowns, but 30 percent were about reckless driving. Women and men were equally likely to speak up. Nine percent of those speaking up were young, nearly half were middle aged and the rest were elderly. Overall, the results indicated that speaking up was not uncommon. There was no significant impact of the program on passenger behavior, though this could be due to limitations of the data collected. Reckless driving and passengers’ complaints are difficult to observe independently, as passengers’ complaints are likely to take place if the driver is driving recklessly but not otherwise. Additionally, researchers could not exclude the potential impact of the placebo effect of having neutral stickers.

Road accidents and deaths: Researchers estimated that for the vehicles that took part in the program, there were 140 fewer road accidents per year than predicted and 55 lives were saved annually.

Altogether these results indicate that the program improved road safety for participating vehicles. Though it is unclear whether there was an impact on drivers’ and passengers’ behavior, the data collected suggests an increased passenger empowerment. The program was also cost-effective: using data on the average age of likely passengers, researchers conservatively estimated the cost-effectiveness of the program as being between US$13 and US$60 per disability-adjusted life-year (DALY) saved. The cost-effectiveness of the more impactful stickers, which reduced claims by 34 percent, was between US$10 and US$45 per DALY saved. The stickers with both text and image showcasing a car crash or passengers speaking up to drivers were the most effective.