In developing countries with high unemployment, cash grants can provide poor people with the capital to invest in small enterprises. In Uganda, researchers used a randomized evaluation to measure the impact of a government program that gave groups of young people US$400 per person in return for a proposal to start a skilled trade. Recipients invested the cash and significantly increased their incomes for several years. However, nine years after the grants, non-recipients eventually caught up to grant recipients in terms of income and employment, suggesting that in this instance, grants acted more like a kick start than a lift out of poverty.

Young people in developing countries often find themselves with too few hours of work, and what little work they can find is poorly paid and unpredictable. How to provide them with more work, steady employment, and higher earnings?

One possibility is helping young people start and run their own small enterprises. Young productive adults often have ideas for business, but no capital to start it, and nowhere to borrow those sums. Cash grant programs for business development have become popular ways for governments and non-profits to help young people help themselves.

What will young people do with cash? Will they invest it in training and assets to learn a trade or form a business? Or will the funds be misspent? Previous research also raises questions about women’s ability to freely make decisions with cash, given powerful men in their lives, family demands and expectations, or social restrictions on women working in business.1

And assuming cash gets invested, how large will the gains be, and how long will they last? Young people with business ideas can jumpstart a business with a grant. But without the cash, shouldn’t we expect these people to slowly skimp and save until they have the funds they need to start the enterprise? If so, then the effects of grants on poverty will be short term. But if people find it hard to save or accumulate capital they may never start those businesses. This is a question of convergence: does happen quickly, slowly, or not at all? With poor young people in a rural economy, anything is possible.

Uganda’s largest employment program sought to test whether an intervention as simple as giving cash to groups of youth who applied to the government could help accomplish the country’s long-term economic and social goals for its youth, or if it would simply propel them onto a path they were already on.

Twenty years of insurgency, instability and conflict led to high rates of poverty and unemployment in northern Uganda, but by 2005 a measure of peace and stability had returned to the region. The centerpiece of the post-conflict recovery plan was a decentralized development program called the Northern Uganda Social Action Fund (NUSAF). In 2006, to stimulate employment growth through self-employment, the government launched a new NUSAF component: the Youth Opportunities Program (YOP), which provided cash transfers to groups of young adults with the goal of encouraging trade-based self-employment. 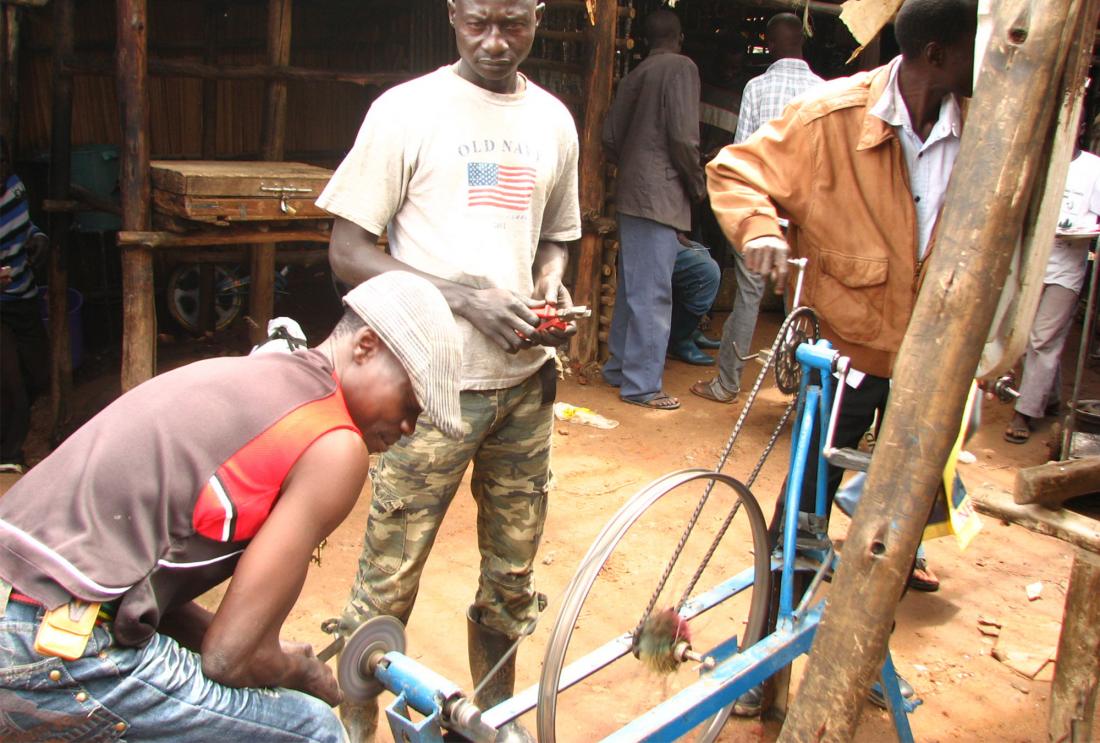 Researchers partnered with the Government of Uganda to conduct a randomized evaluation to measure the impact of the YOP on young adults’ employment, income, and general well-being.

YOP invited young adults, aged 16 to 35, to organize into groups and submit a proposal for a cash transfer to pay for: fees at a local technical or vocational training institute of their choosing; and tools and materials for practicing a craft.

The average applicant group had 22 members. Group cash transfers averaged nearly UGX 12.8 million (US$7,108), and varied by both group size and group request. The average transfer size per member was UGX 673,026 (US$374)–more than 20 times the average monthly income of the youth at the time of the baseline survey. Once the transfer was awarded, the government did not monitor the use of the money.

Due to vast oversubscription, among 535 eligible groups that applied, 265 were randomly selected by lottery to receive the cash transfer. The other groups did not receive a transfer and formed the comparison group.

To measure impacts on employment, income, and community cohesion, researchers surveyed participants two, four, and nine years after the program. Despite the long time period between the cash grant and the nine-year survey, the survey lost fewer than 16% of the sample in the last round of data collection.

Overall, the program had strong economic effects for at least the first four years, but these effects largely dissipated after nine years, as those who did not receive the grants were able to earn, save, and invest enough to catch up to grant recipients. This is good news for Ugandans, since it suggests that the poor have opportunities to earn and save. But it suggests the impacts of cash grants on poverty will be temporary in this place and this group.

Four years after the grants were delivered, the program seemed to have strong economic effects. Beneficiaries of the YOP program had 41% higher income and were 65% more likely to practice a skilled trade, such as carpentry, metalworking, tailoring, or hairstyling. They also worked 17% more hours, nearly entirely accounted for by these new professions; while most still farmed part-time, hours worked in agriculture were not different. The treatment group was also 40% more likely to keep records, register a business, and pay taxes.

Nine years after the grants were delivered, the comparison group caught up to the treatment group in terms of income and employment, for both men and women. Grant recipients were able to increase their work hours immediately after receiving the grant. The comparison group grew their hours more slowly, as they started their small enterprises. Nine years after the transfer their work hours were roughly the same. The increased work hours were driven by non-agricultural work and petty business, rather than work in skilled trades. Earnings follow a similar pattern.

After nine years, the program’s main lasting impacts were a slight increase in household assets and a sustained increase in the likelihood of engaging in skilled trade. The program had little effect on mortality, fertility, health, or education.

Over the nine years, researchers estimate that the YOP provided a temporary earnings gain of approximately $665 per individual recipient, about 1.8 times the size of the grant, suggesting the program was cost-effective (though this excludes administrative costs, which are unknown and potentially high). There were also some long-term impacts on the skill level of work, which suggests the program group may have higher quality jobs, something the evaluation cannot quantify.

Overall, these results suggest this cash transfer program acted more like a "kick start" for underemployed young people than a transformative solution to poverty.

1 result(s)
Study: Giving Out Cash in Uganda Helped After 4 Years. After 9 Years, Not So Much