The Impact of Job Networks on Women’s Recruitment in Malawi

Women are commonly underrepresented in the formal sector in low- and middle-income countries. Researchers introduced a recruitment drive for a firm in Malawi to evaluate the impact of referral-based hiring on women’s employment at the company. Results from the randomized evaluation indicate that men systematically referred fewer women, and women’s referral of other qualified women was not enough to offset men’s behavior. This finding suggests that informal referral schemes may systematically disadvantage qualified women in the formal labor market.

While the gender gap in labor force participation worldwide has declined sharply over the last thirty years, women in low- and middle-income countries (LMICs) continue to be underrepresented in the formal sector. This may be due to discrimination or differences in education and relevant skills between men and women. Another possibility is that hiring processes themselves disadvantage women.

A large proportion of jobs are secured through informal channels, such as employee referrals, and theory suggests that hiring based on social networks has the potential to exacerbate inequality for initially disadvantaged groups, including women. On the one hand, women may be less likely to be hired through a referral if they work in occupations where social networks are less relevant. On the other hand, women could benefit from referrals through their social networks if their peers can identify important, hard-to-observe characteristics that employers might otherwise miss. While many observational studies suggest that women gain less from informal referral systems than men, there is little rigorous evidence to date on the impacts of these systems on women’s participation in the labor market.

Women in Africa are more likely than men to work in informal occupations such as small-scale farming, street-vending, or domestic labor. In Malawi, less than one-third of women participate in the formal labor force, compared to nearly 58 percent of men.

Innovations for Poverty Action (IPA), a non-profit research organization with offices in a number of LMICs, including Malawi, often hires local enumerators to conduct interviews of farmers, business owners, and households in both rural and urban areas. For the purpose of this evaluation, IPA Malawi aimed to hire 200 enumerators and had an explicit goal to hire more women, since same-gendered enumerators can be important for administering sensitive questions. However, the office has often struggled to find enough qualified women to fill available positions: women typically comprise only 15 to 20 percent of enumerators hired. 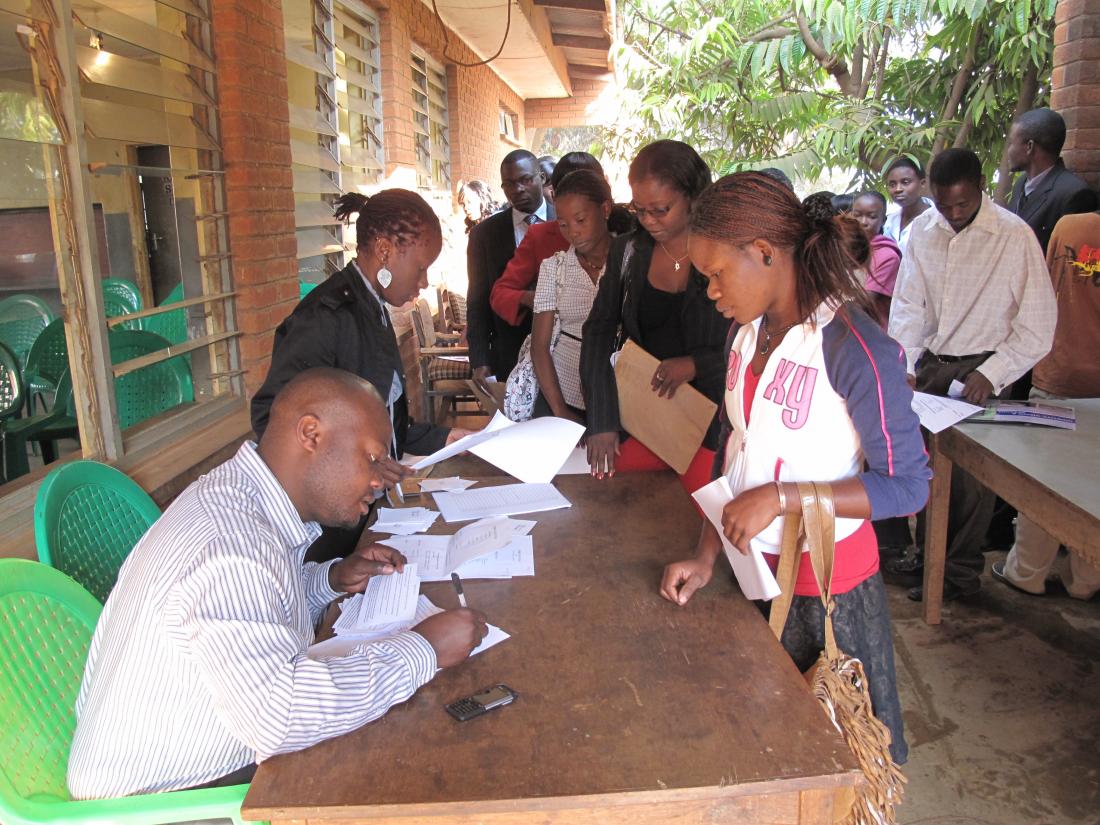 Researchers partnered with IPA Malawi to evaluate the impact of a referral-based hiring system on the gender composition and quality of referred applicants. IPA Malawi conducted a competitive recruitment drive to find qualified men and women to serve as enumerators for its ongoing field research activities in two main Malawian cities, Blantyre and Lilongwe. The recruitment process included a written test, a practical test, and a conversation with the recruitment manager.

In the tests, researchers collected data on math, English, and computer skills, as well as on job description comprehension and personal qualities important for the work of an enumerator. At the conclusion of the interview process, candidates were asked to refer a friend or relative to apply for the same position. Of all conventional applicants, 62 percent were male and 38 percent were female.

The referral process was randomized along three dimensions. First, candidates were randomly assigned to be told what gender of person they must refer: a woman, a man, or someone of either gender. Second, all candidates were offered a randomly determined “finder’s fee” that was either fixed at 1000 or 1500 Malawi Kwacha (MWK) (US$6.66 or US$10), or varied between 500 and 1800 MWK (US$3.33 and US$12), depending on the qualifications of the person they referred. Third, applicants were told that the qualification threshold was determined with either absolute standards, namely by receiving an overall score greater than 60, or with relative terms by scoring in the top half of all applicants. Candidates were eligible to receive payment if their referral attended and completed a recruitment session.

Researchers examined how the characteristics and quality of referrals varied under different incentive schemes. For instance, if male referrals are primarily driven by taste-based discrimination against women, fixed incentives are expected to diminish this behavior and encourage more female referrals. If, on the other hand, male referrals are driven by actual or perceived differences in men’s and women’s capabilities, incentives conditioned on referral performance are expected to further exacerbate the gender-based inequality in referrals.

A potential weakness of the experimental design is that job applicants, rather than existing employees, were asked to make the referrals. Conventional applicants may have thus been wary of identifying high-quality candidates that they would have to compete with for available positions.

Researchers found that qualified female candidates were at a disadvantage when referrals and social networks were used in the hiring process. Men systematically referred few women, despite being able to refer qualified women when explicitly asked for female candidates. Performance pay also did not alter men’s tendencies to refer men, and women did not refer enough high-quality women to offset men’s behavior.

Number of women recruited: While 38 percent of the original applicants themselves were women, only 30 percent of referrals were women among applicants who were allowed to refer someone of either gender. The difference in referral rates was driven by male candidates, 77 percent of whom systematically referred other men when given the choice. Women referred other women 43 percent of the time, approximately the same rate by which women applied to the job through the conventional method. Neither incentive type improved referral outcomes for women. These trends do not appear to be driven by segregated social networks, as men were just as likely to be connected to qualified women as they were to qualified men.

Referral quality: When given the choice to refer either gender, women were 7 percentage points (64 percent) more likely to refer qualified women than men were. However, while female applicants referred women more often than men did, their referrals were too unlikely to qualify for the position to offset men’s referral behavior and create balance in the workforce. Performance incentives also did not improve the quality of referrals among conventional applicants who were asked to refer women or who were able to refer anyone.

IPA Malawi received the highest-quality candidates by asking male CAs to refer other men and providing applicants with a performance incentive, possibly because higher-stakes incentives may induce greater male bias when the return to getting a high-probability, high-quality candidate increases. This finding suggests that firm incentives may further exacerbate bias against women in the workforce.