Sanitation and hygiene programs often aim to reduce illness among children, but there is limited evidence of impact when either hygiene or sanitation are addressed in isolation. Researchers conducted a randomized evaluation to measure the impact of sanitation and handwashing promotion campaigns, alone and in combination, on household knowledge, behavior, and child health (diarrhea prevalence, stunting, wasting, and anemia). While the program improved hygiene and sanitation behavior, it had no impact on child health outcomes. The findings suggest that large-scale WASH programs require a high level of take-up and consistent behavior change before significant improvements in health outcomes can be observed.

Diarrheal and other intestinal diseases are one of the most common causes of poor health or death among children living in low- and middle-income countries. These diseases may also reduce children’s nutrition intake, resulting in stunted growth. In an effort to reduce the prevalence of these diseases, many programs around the world aim to promote sanitation or encourage better hygiene practices such as handwashing. However, there is limited evidence that programs promoting sanitation or hygiene in isolation can improve health outcomes.123

An alternative approach is a more comprehensive water, sanitation, and hygiene (WASH) package that incorporates both sanitation and hygiene promotion. There is a strong rationale to believe that children are exposed to contaminated fecal matter through multiple pathways simultaneously. Improved sanitation is important for reducing the presence of fecal matter in homes and water sources, while good hygiene practices, such as handwashing, are necessary to minimize exposure to fecal matter in daily activities. Can a combined program that promotes both sanitation and hygiene reduce diarrhea prevalence and related illnesses among children under five?

According to the Tanzanian Demographic and Health Survey in 2010, 15 percent of children under five were reported to have diarrhea in the two-week period before the survey.4 The majority of Tanzanian households utilize sanitation facilities that do not adequately separate waste from human contact, such as open-pit latrines. In addition, among the households included in this study, only 13 percent of observed activities that involved interacting with fecal matter were followed by handwashing, despite 49 percent of households having some sort of handwashing device. 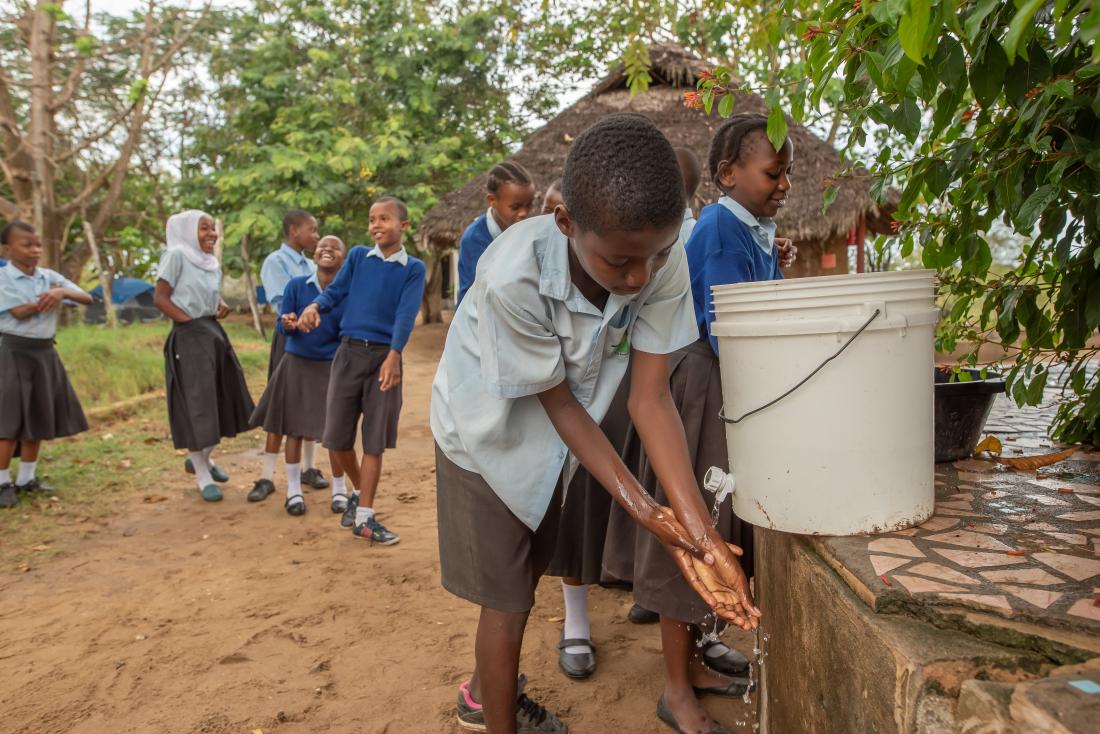 Dodoma, Tanzania. A boy washes his hands while other students are waiting in line for their turn.
Photo: Gonzalo Bell | Shutterstock.com

Researchers conducted a randomized evaluation to measure the impact of handwashing promotion and sanitation campaigns, alone and in combination, on household knowledge, behavior, and health of children under five. The program was conducted from June 2009 to August 2010. A total of 362 rural villages were randomly assigned to one of four groups:

The study posed two important ethical concerns. First, whether the use of a comparison group would be justified if the intervention had an ex ante expectation to improve the lives of recipient households. Second, how to handle sensitive health biomarker data collection. On the first, the project was piloted in ten districts and did not have the resources to deliver nationally. As such, a decision was taken together with the ministry to randomize all eligible villages into treatment and comparison groups to allow for equal consideration under a budget-constrained rollout. On the second concern, a team of trained health professionals were included in the survey team and were responsible for administering anthropometrics and biomarkers (blood samples for anemia), and followed a protocol of referring children to local clinics if child measures presented health concerns. All protocols were guided by international and local Institutional Review Boards.5

Overall, the TSSM campaign improved sanitation behavior and the HWWS campaign improved hygiene behavior, both when the programs were delivered alone and when they were combined. However, none of the interventions reduced diarrhea prevalence in the seven days before the survey, or any other health outcomes measured. These results suggest that relying on a behavior change approach may not be adequate for generating meaningful health improvements, at least in this context.

Hygiene behavior: The HWWS campaign led to small improvements in caregivers’ knowledge regarding the importance of handwashing. However, the campaign did not increase the likelihood that households had any form of handwashing station, and handwashing practice only improved before food preparation and not after contact with fecal matter. Caregivers in villages that received the HWWS campaign, both alone and combined with the TSSM campaign, were 1.6 percentage points more likely to wash their hands before handling food or feeding, off of a low base of just 1.3 percent in the comparison group. The HWWS campaign also improved observed child cleanliness and caregiver hand cleanliness.

Health outcomes: The ultimate goal of the TSSM and HWWS is to improve health outcomes among children under five through sanitation and handwashing behavior change. However, researchers found no significant impact on anemia, stunting, wasting, or reported diarrhea prevalence in the seven days before the survey. When a larger sample of households was surveyed (using the village listing survey), there was weak evidence that a 14-day diarrhea prevalence declined by 12.5 percent (a 2.1 percentage point decrease relative to the comparison group) in the villages that received both TSSM and HWWS treatment.

The evidence suggests that the behavior change promotion approach the Government took was effective at increasing sanitation coverage, while handwashing practices were harder to influence. The research contributed to the discussion and planning of Tanzania’s National Sanitation Campaign, the country’s flagship campaign to promote sanitation coverage, which was launched shortly after the completion of the evaluation. Follow-up research in the form of large-scale randomized evaluations and complementary ethnographic work with some of the original partners is continuing in Tanzania exploring the sustainability of rural water supply, and behavior change messaging for the National Sanitation Campaign and associated Covid-19 awareness promotion.