The Impact of a School-Based Smoking Prevention Program in Indonesia

The Indonesian government has implemented a limited set of tobacco control policies despite a high prevalence of cigarette smoking among adolescents. Researchers conducted a randomized evaluation to measure the impact of a school-based program that used a non-monetary penalty and regular monitoring to prevent adolescent tobacco use. The program reduced the probability that adolescents smoked, with effects sustained three months after the program ended. Incorporating a school competition component to the program had no further impact on smoking abstinence.

Although youth smoking has declined worldwide in recent decades, this decrease has occurred largely in high-income countries. Nearly 80 percent of the world’s 125 million smokers aged 15 to 24 live in low- and middle-income countries. In Indonesia, 34 percent of all middle-school students currently smoke and 56 percent have tried smoking, highlighting adolescence as a critical period for smoking prevention.

While tobacco taxes are viewed as an effective way to reduce youth smoking, tobacco taxation has faced obstacles to implementation in many low- and middle-income countries. Due to these policy constraints, policymakers in Indonesia and other low- and middle-income countries have a growing interest in non-tax tobacco control strategies, including prevention programs. Can a non-monetary incentive program effectively prevent tobacco use among adolescents in Indonesia?

The tobacco industry is an important source of revenue and employment in Indonesia, which has limited the scope for national tobacco control strategies, like tobacco taxation. Indonesia has among the highest male smoking prevalence globally, and many adolescents in Indonesia report first smoking between the ages of 12 and 13. Most children aged 13–15 who smoke report purchasing cigarettes from vendors despite a legal prohibition. Cigarettes are readily accessible to students—retailers are often located near schools and sell cigarettes by the stick, which offer cheaper options to students.

Because female smoking prevalence in Indonesia is low, the study targeted male students aged 12–13 in grade 7. Consistent with the high prevalence of youth smoking in Indonesia, nearly three-quarters of students in this study had tried smoking by the time they reached seventh grade. 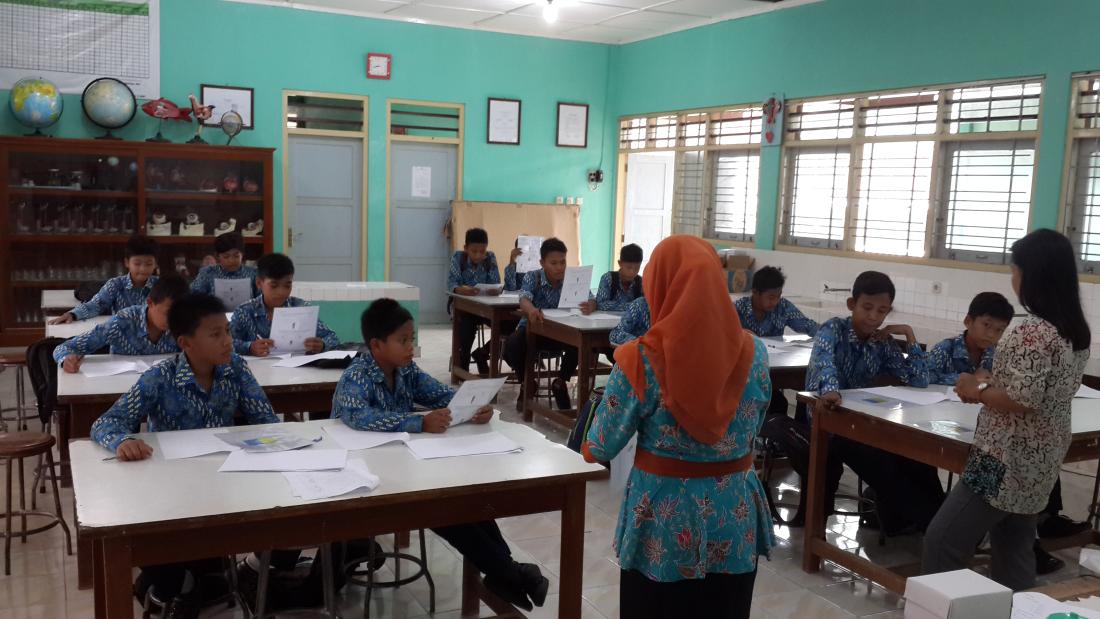 Researchers partnered with local government agencies to evaluate a school-based program aimed at increasing smoking abstinence among students. Researchers randomly assigned 72 middle schools with a total of 2,783 students to one of the following groups:

In the second half of the 2016–2017 academic year, before the intervention, all schools received a one-time information session on the risks of smoking from trained facilitators. Urine cotinine tests, which detect a biproduct of nicotine, were carried out in all schools before the start of the program, three months after the start, and eight months after the start (three months after regular monitoring in program schools had ceased). At the same intervals, students provided self-reports of their smoking status, and at the three- and eight-month follow-ups, student council members, teachers, and classmates were asked to report the names of students from the school who they had observed smoking in the past week.

Throughout the five-month intervention period, schools in the individual pledge only and individual pledge plus school competition groups collected biweekly reports from students and teachers to identify smokers. Students in program schools who violated their pledge, as measured by a positive urine cotinine test or student and teachers’ biweekly reports, were penalized according to a school-based demerit system. For one or two offenses, the student received a warning from the guidance counselor, and after more than two infractions, the school principal notified the parents.

One concern was that the study intervention could lead to bullying because a student reported a classmate for smoking or students placing undue pressure on each other not to report classmates for smoking. The study closely monitored any reports of bullying or undue pressure and queried students and teachers about it during the follow-up assessments. Ultimately, the study did not receive any reports of these occurrences, although it remains a concern for interventions that employ any form of peer monitoring and/or social sanctioning.

The school-based program that used a non-monetary penalty and regular monitoring reduced the probability of smoking, with effects sustained three months after the program ended. However, school competition had no additional impact on tobacco abstinence.

By March 2017, three months after the start of the program, biochemically-verified tobacco abstinence among students in the individual pledge only group increased by 6.5 percent, or 5.1 percentage points. This effect remained similar by August 2017, eight months after the start of the program (three months after the program ended). Because class monitoring had ceased by then, this indicates that monitoring alone did not drive the program effect. The addition of school competition did not lead to further improvement in smoking abstinence. Students in both program groups reported smoking less with their friends than students in the comparison group, which suggests that smoking may have become less acceptable among peers.

Researchers estimated that the benefits of the program exceeded its costs by US$3,000 to US$7,000, implying a benefit-to-cost ratio of 5 to 19.

After the study concluded, the Kulon Progo health district continued the program implementation for an additional school year.