Financial stress and worries associated with poverty could directly affect workers’ ability to work effectively and increase their income. Researchers conducted a randomized evaluation to gauge whether enhanced financial stability impacted worker productivity in India. They found that giving small-scale manufacturing workers financial relief in the form of early wage payments increased their productivity and attention to detail on the job. This effect was concentrated among workers with higher preexisting financial strain.

The financial instability of living under poverty might have negative psychological impacts, such as worry, stress, or sadness. In turn, these psychological impacts might affect people’s ability to work well, making it even more difficult for them to make a living and increase their income. Can temporary financial relief increase low-income workers’ productivity by decreasing their levels of stress or worry?

This evaluation took place in Odisha, India, where laborers primarily work in agriculture for much of the year but typically seek other labor during the lean season, which runs approximately from March to June. During the lean season, workers try to find short-term contract work in fields like manufacturing or construction, but such jobs are relatively scarce in the region. In these months, workers on average find only 1.9 days of wage employment per week.

One type of manufacturing job that employs workers on temporary contracts in this setting is making disposable plates out of leaves for restaurants. This is a technical task that requires significant focus, as plates must be stitched together out of irregularly sized leaves to form a clean circle.

Participants of this evaluation were 18-to-55-year-old men who worked regularly as wage laborers and were not migrants. These workers reported experiencing high levels of financial anxiety–68 percent of the sample said they would have difficulty producing INR 1,000 (US$15.43 in 2017) in event of emergency. In addition, 70 percent said they were “very worried” about their future finances, and 83 percent reported they thought about finances while working. 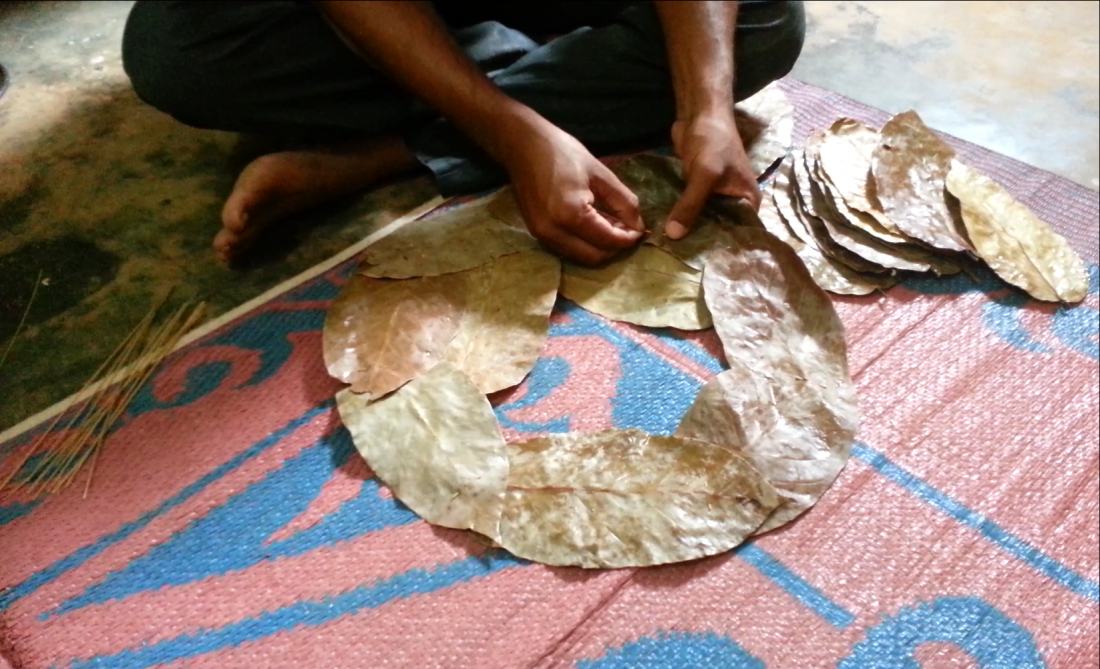 Assembling a leaf plate, as shown above, can be a time-intensive task requiring high levels of focus and attentiveness.
Suanna Oh

Between 2017 and 2018, Researchers conducted a randomized evaluation to test the impact of improving workers’ financial stability on their workplace productivity. They recruited 408 workers from 47 villages in Odisha through fliers and door-to-door outreach, advertising the opportunty for a 12-day work contract producing leaf plates in one of five worksites.  Workers were paid a base rate of INR 200 per day (US$3.09) as well as INR 3 (US$0.05) per plate. They were also paid a completion bonus of INR 300 (US$4.63).

Researchers examined two primary measures of workplace productivity. Firstly, they measured how many plates workers produced per hour. Secondly, they compiled a measure of worker “attentiveness” by examining the number of leaves used per plate, number of stitches used, and indicators that stitches had been undone and redone.

Researchers believed that more “attentive” workers would be more efficient by using fewer leaves and fewer stiches, and by redoing stitches less frequently. In addition, researchers conducted a baseline survey before the first workday and periodic additional surveys during the intervention. These surveys measured worker demographics, their financial status and spending, and their level of worry over finances.

Lastly, researchers performed a supplementary analysis following the completion of the main evaluation. They rehired workers who had participated in the main intervention to perform the same task, but this time randomly varied the pay they received per plate between INR 2 (US$0.03), INR 3 (US$0.05), and INR 4 (US$0.06), with no early pay. Workers’ base pay was also adjusted so that their overall payment–and overall financial relief–remained constant. This allowed researchers to compare the effects on productivity and attentiveness of giving workers financial incentives as opposed to the main intervention’s effects of giving workers financial relief.

Researchers obtained informed consent from all participants prior to joining the study. Each participant was free to stop their participation at any time, and/or to not answer any of the survey questions asked during the study. The experiment itself offered a valuable opportunity–two weeks of paid work–during the lean season when jobs are scarce. The control group was paid at the end of their work period, which is typical for seasonal contract jobs in the study area.

Researchers believed that the two treatments constitute minor changes compared to experience of the control group. First, relative to the control group, the early-pay treatment arguably improves workers' financial situation by paying them early and thus reducing their financial strain.

Second, following previous work, the priming treatment induces thoughts about finances. Importantly, this treatment is not intended to create new thoughts but rather bring existing thoughts top of mind.

Workers who received earlier pay became more productive and attentive to detail in the workplace. This effect was concentrated among workers with higher preexisting financial strain.

Workers’ productivity: Overall, workers produced 0.27 more leaf plates per hour after receiving early payment, a 7 percent increase relative to the comparison group. This effect was concentrated among workers with above-average financial strain (as measured through an index including land ownership, house quality, use of credit for food and daily goods, and access to cash for emergencies), who produced 0.5 additional plates per hour. In contrast, relatively lower-strain workers experienced no significant change in productivity. These results appeared immediately the day after early payment and persisted through the duration of workers’ contracts.

Pay-per-plate financial incentives: An increase in payment per plate from INR 2 (US$0.03) to INR 4 (US$0.06) modestly increased the average number of plates produced per hour by 0.036. However, increasing the payment per plate did not affect the compiled measure of worker attentiveness. These findings indicate that early pay and increased payment-per-plate affected worker performance through different mechanisms. Both types of interventions might motivate workers, leading to boosted productivity. However, the fact that early pay increases workers’ attentiveness, while increased payment per plate does not, suggests providing financial relief in addition to financial motivation is important for workers to worry less and engage in better focus and planning in their job.

Overall, these results suggest a psychological relationship between financial instability and work productivity. Workers who received cash relief were able to work both more productively and more attentively. Psychological factors like stress could therefore play an important role in keeping people trapped in cycles of unproductivity and poverty.