Incentives, Selection and Productivity in Labor Markets in Malawi

Especially in developing countries, there is little evidence about the mechanisms through which compensation impacts worker productivity. To examine this relationship, researchers evaluated the effect of randomly offering varied wages to bean-sorting workers in rural Malawi. While offering higher wages caused workers to increase their productivity, it did not attract more productive workers.

Well-functioning labor markets, which allow the most productive workers to find the best paying jobs, are important for increasing overall economic productivity. However, while existing literature demonstrates a positive relationship between higher compensation and worker productivity, the impact of higher wages on the quality of workers hired is not always clear. Higher wages may attract higher quality workers who are more productive (economists call this a selection effect), or they may stimulate all workers to become more productive (known as an incentive effect). Understanding the mechanisms through which wages attract or motivate specific workers has important implications for economic policy.

In developing countries in particular, there is little evidence about the mechanisms through which compensation impacts worker productivity. To examine the selection and incentive effects of higher wages in a developing country context, researchers evaluated the effect of offering randomly varied wages to workers sorting beans in rural Malawi. Researchers examined how higher wages influenced the overall quantity and quality of worker output.

In rural Malawi, where agriculture is an important part of the economy, labor markets are highly seasonal. Households are often short on cash and food from January through March, the season leading up to harvest when demand for labor is highest. Informal labor markets for casual day labor are common, and households buy and sell labor on a daily basis, paying and earning per-day wages or piece-based rates. In these markets, men are more likely to perform manual labor and women more likely to perform detail-oriented tasks, such as weeding. 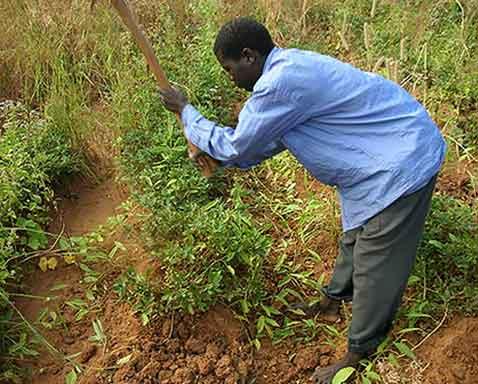 Researchers evaluated the impact of varying wage levels on worker quality and performance in rural Malawi. In collaboration with local agricultural extension officers, researchers identified a list of suitable villages in each of six districts, from which they randomly selected two villages per district. Workers in these villages were offered the opportunity to work for a day sorting beans, a common task for day laborers in this context. In each district, researchers offered the employment opportunity in one village during the low labor demand season and in the other during the high demand season.

In each selected village, researchers invited local workers to attend an orientation session; all workers who attended the session were eligible to participate in the program, and were invited back for work the following day. On each of the next four days, workers indicated the lowest wage they would be willing to accept (WTA) for their labor. Then, an actual wage rate for the worker was selected in a random draw; if the selected wage rate was equal to or higher than the worker' s stated WTA, the worker was hired for the rest of the day at the selected wage. If the selected wage rate was lower than the worker' s WTA, the worker was not hired. Every worker who showed up was paid a small participation fee, regardless of whether they were hired, in order to encourage a representative sample of workers.

If selection effects hold true, more qualified workers should have a higher WTA, since they will want to be paid more for their higher productivity. By comparing the output of workers who were paid the same wage rates but had differing WTAs, researchers were able to examine whether workers with a higher WTA were actually more productive.

If incentive effects hold true, among workers of the same quality (with the same WTA), those who are paid a higher wage should be more productive. By comparing the output of workers who had equal WTAs but were paid different wage rates, researchers were able to examine whether higher wages actually incentivized workers to be more productive.

To additionally measure the dynamics between the quality and quantity of output, half of all workers hired each day were randomly selected to have their work monitored for quality. A random handful of each unit of sorted beans was checked for errors, and if more than two errors were found in a sample the worker was required correct the errors before moving on to the next unit.

Incentive effect: Workers of the same quality increased their output when offered higher wages, demonstrating a positive incentive effect. An increase of 10 Malawi Kwacha (MWK) paid per unit of beans increased the number of units sorted by 3.2 percent among workers with the same WTA. The increased wages did not affect the quality of work produced.

Selection effect: Offering higher wages led to the hiring of lower quality, less productive workers, demonstrating a negative selection effect. A hired worker with a MWK 10 higher WTA sorted 2.7 percent fewer units of beans per day than a worker paid the same wage but with a lower WTA. This negative effect was completely driven by men. One potential explanation for this gender difference could be that, compared to women' s labor options, the other employment opportunities for men tended to require different skills than those required for bean sorting; men who were productive workers in other jobs may have been attracted to the bean sorting job for its higher wage rate, but were actually less qualified for the job.

Monitoring: Quality monitoring procedures increased workers' quality of output, but also decreased the quantity of beans sorted. These results suggest that the monitoring diverted workers' effort toward output quality at the cost of some quantity. On average, it took monitored workers 0.7 days longer to sort a 50 kg bag of beans than workers who were not monitored. However, the increased revenue from a 50 kg bag of well-sorted beans, which can sell for as much as MWK 4,000 more than unsorted beans, could potentially make up for this decrease in total output. Monitoring did not affect the observed incentive and selection effects.