Positive and cooperative intergroup contact has the potential to reduce prejudice and improve relationships between members from conflicting groups. The researcher evaluated the impact of mixed Christian-Muslim soccer teams on social cohesion and interactions between these groups in an ISIS-affected area of Iraq. Results indicate that Christians who played on mixed teams demonstrated a higher likelihood of engaging with Muslim teammates after the league ended. However, the intervention did not improve their overall tolerance toward the Muslim community.

Countries recovering from conflict are often marked by devastated social ties and low levels of trust across groups, putting them at risk of relapsing into violence and instability. In such contexts, rebuilding and strengthening coexistence between groups has been a key policy goal for achieving sustainable peace. Social cohesion has been associated with good governance and economic development, yet there remains limited understanding of how best to build it.

The “contact hypothesis” asserts that contact between groups can reduce prejudice and bias when it is cooperative, places participants on equal footing, is endorsed by communal authorities, and is characterized by a common goal. Previous research suggests that grassroots organizations, like sports teams or trade unions—where cooperation is mutually beneficial—can help build social trust between conflicting groups. Despite the potential of intergroup contact, there is little rigorous evidence about whether it can build lasting real-world behavior change in areas affected by conflict and ethnic violence. Evidence on the extent to which this tolerance can extend outside the intervention, or spillover to others in the community, is likewise sparse. Can intergroup contact build social cohesion after war?

In June 2014, the Islamic State of Iraq (ISIS) committed mass atrocities against minorities in the city of Mosul—Iraq’s fifth largest city—internally displacing roughly 100,000 Christians within a matter of days. Many Christians believed their Muslim neighbors were complicit in the ISIS raids, resulting in intense distrust, a fear of returning home even to liberated areas, support for local self-defense militias, and the potential for a backslide into conflict. Muslim minority groups who were themselves persecuted by ISIS are also resented by Christians, who typically view them as cultural and security threats despite a shared history of victimhood.

Despite the differences between Christians and Muslims in northern Iraq, amateur soccer is popular among both groups. The cities of Qaraqosh and Erbil, where this evaluation took place, are home to a network of amateur male soccer teams. However, like much of life in Iraqi Kurdistan, the cities’ soccer teams are segregated by religion and many are founded by displaced Christians. 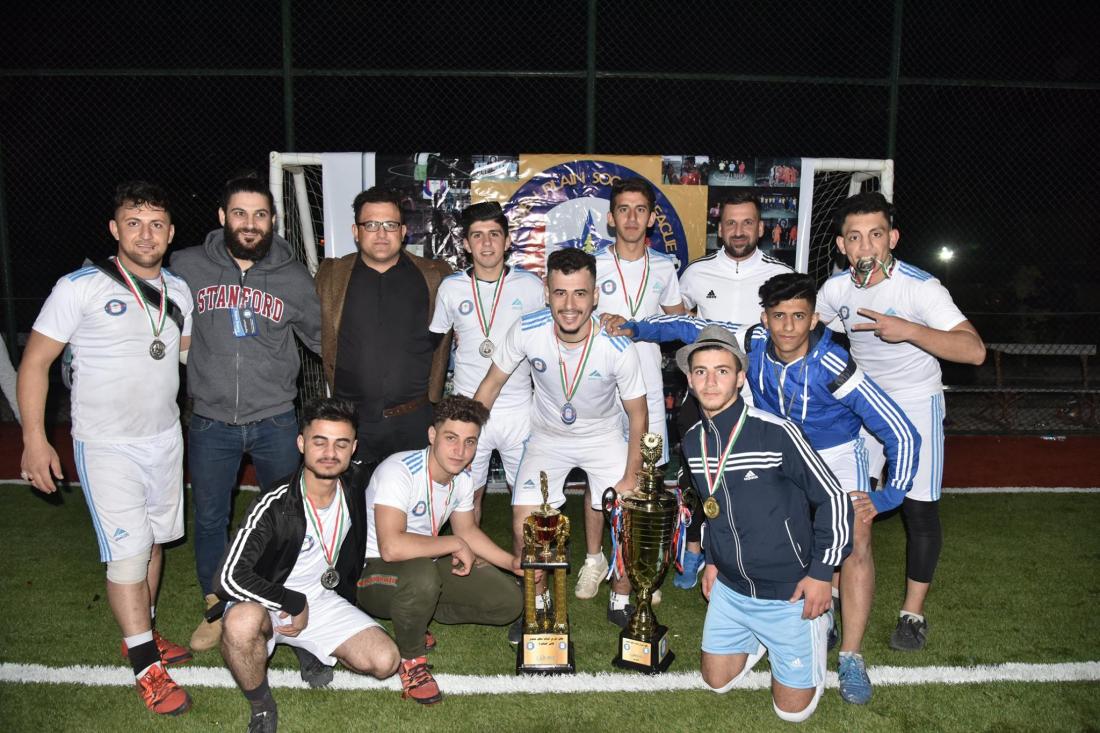 A winning team at the end of the tournament in the previous pilot study.
Photo: Salma Mousa | J-PAL

The researcher partnered with Christian community organizations and the Nineveh Governorate Council to conduct a randomized evaluation measuring the impact of mixed-religion soccer teams on social cohesion and interactions between Christians and Muslims.

Research staff recruited 42 Christian teams to participate in a two-month soccer league for displaced people and returnees in the area. Teams in the intervention group thus received three to four additional Muslim players, while those in the comparison group received three to four additional Christian players. 1 To incentivize teams to participate in the soccer league, the research team hired professional referees, provided uniforms, reserved fields, and awarded trophies to the top three teams. A total of 459 Christian and 70 Muslim players participated in the league.

The study aimed to measure players’ tolerance toward other teammates and peers encountered in the league (tolerance on the field) as well as generalized prejudice toward members of the outgroup, for example, local residents, restaurant patrons, and passersby who one does not know personally (tolerance off the field). Researchers examined behavioral outcomes among Christian players, including willingness to attend a Ramadan dinner (and to bring their families), willingness to train with Muslims in the future, and willingness to register for a mixed league in the future. Finally, via household surveys, they measured whether exposure to the league had an effect on tolerance among local residents.

Promoting positive and cooperative contact helped Iraqi Christians displaced by ISIS build tolerance toward Muslim peers after conflict, but these effects did not generalize to the broader Muslim community.

Tolerance on the field: Christians with Muslim teammates were 318 percent more likely than those in non-mixed teams to train with Muslims six months after the league and 57 percent more likely to vote for a Muslim player to receive a sportsmanship prize. The league may have improved players’ tolerance by normalizing contact with Muslims: 15 percent of mixed-religion teams had integrated Muslim players as core team members six months following the end of the league, indicating that contact led to sustained change.

Tolerance off the field: However, the program did not reduce Christians’ overall prejudice toward the broader Muslim community. Players with Muslim teammates were no more likely to attend a mixed social event or to patronize a Muslim-owned restaurant up to four months following the league. ​​Those who attended the event were also no more likely to bring a female guest, which typically includes a family member like sisters or wives (a measure of their comfort with Muslim strangers).

Personal beliefs and attitudes: The intervention had no impact on Christian players’ level of comfort with Muslims as neighbors or their views on other salient issues, like blaming Muslim civilians for Christian suffering. On the other hand, Christian players on mixed teams agreed more that ethnic and religious divisions are arbitrary than players on Christian-only teams. Compared to the first set of self-reported measures, however, these questions mostly capture rather abstract attitudes, confirming that the intervention was not able to change Christians’ tolerance toward Muslims.

Success in the league: Players in teams that reached the finals were more likely to attend a mixed social event, for example. This suggests that a positive or successful experience may be needed to overturn the negative experiences instilled by conflict and to maximize the impacts of contact.

Taken together, these results highlight the potential for civic organizations that cut across social cleavages to rebuild social trust after conflict, at least in relationships key to day-to-day coexistence and community-building.

After the evaluation, the Ninewa Governorate Council, the intervention’s local government partner, was enthusiastic about the key takeaway: that inter-ethnic community programs can foster local-level social cohesion. As a result, the Governor of Ninewa Province decided to include inter-ethnic programming as part of their reconstruction and development plan for the city of Mosul, funded by the provincial government, along with the Iraqi federal government, and international sponsors, with the researcher’s input. The provincial council also hired staff to set up inter-ethnic soccer leagues in the Hamdaniyya IDP camps in 2018.

Similar evaluations are currently being implemented with NGO partners in Lebanon and Colombia, looking at the role of intergroup contact between Lebanese and Syrian underprivileged youth, as well as between Venezuelan migrants and Colombian natives in Bogota.

1.
To address the fact that Christian players assigned to all-Christian teams would still be exposed to Muslims by competing in the same league, the researcher created a second league composed of all-Christian teams. Assignment to the all-Christian league was non-random, however, and the results are not included in the main analysis.