The amount of competition between intermediaries in agricultural markets has a large role in determining prices but can be very hard to measure. Where formal financial institutions are absent, intermediary traders often serve as a substitute source of credit for farmers. In order to measure the level of competition among traders in Sierra Leone’s cocoa market, researchers conducted a randomized evaluation to test the impact of delivering subsidies to cocoa traders on prices that traders paid to cocoa farmers. While the bonus payments did not affect the prices paid to farmers, it did lead the traders to more frequently offer credit through advance payments to farmers. These results suggest that Sierra Leone’s agricultural trading sector was competitive, meaning that all traders offered similar prices to farmers.

Rural areas in low- and middle-income countries often lack formal access to credit. In the absence of strong financial institutions, intermediaries frequently serve as a substitute source of credit for consumers and farmers. It is common practice, for instance, for an intermediary trader to provide credit in the form of advance payments to farmers before the harvest under the agreement that the farmer will sell all of their crop to that trader at a pre-determined price at the time of harvest. In these instances, prices are dependent on the credit terms, which can lead to different prices for farmers selling the same products.  Can providing a bonus to intermediary traders affect the amount of competition in the market through changes in prices offered for raw agricultural products?

Cocoa is an important crop in Sierra Leone, where it is the largest agricultural export by value, comprising 8.6 percent of all exports in 2017. Production of cocoa in Sierra Leone is fragmented, and there are many steps in the value chain between farmers and international buyers who send cocoa abroad for processing. Specifically, cocoa farmers sell to traders, who sell to wholesalers in small towns, who sell to exporters in larger towns, who in turn sell to international buyers for export. As with many export goods, a key policy concern is to maintain consistent and high quality. For farmers across the country to produce high-quality cocoa, it is important that the higher revenues earned from higher quality cocoa also translate to increased earnings for farmers.

All participating traders in the study were male and had been trading cocoa for about eight to nine years. The average trader in this context operated in four to five villages and bought cocoa from six farmers per village. Traders made advance payments for cocoa before and during the harvest season; farmers, in turn, used these advance payments either to cover the costs of producing cocoa or for household consumption. In exchange for the advance payments, farmers sold cocoa at below-market prices to the traders who lent to them. 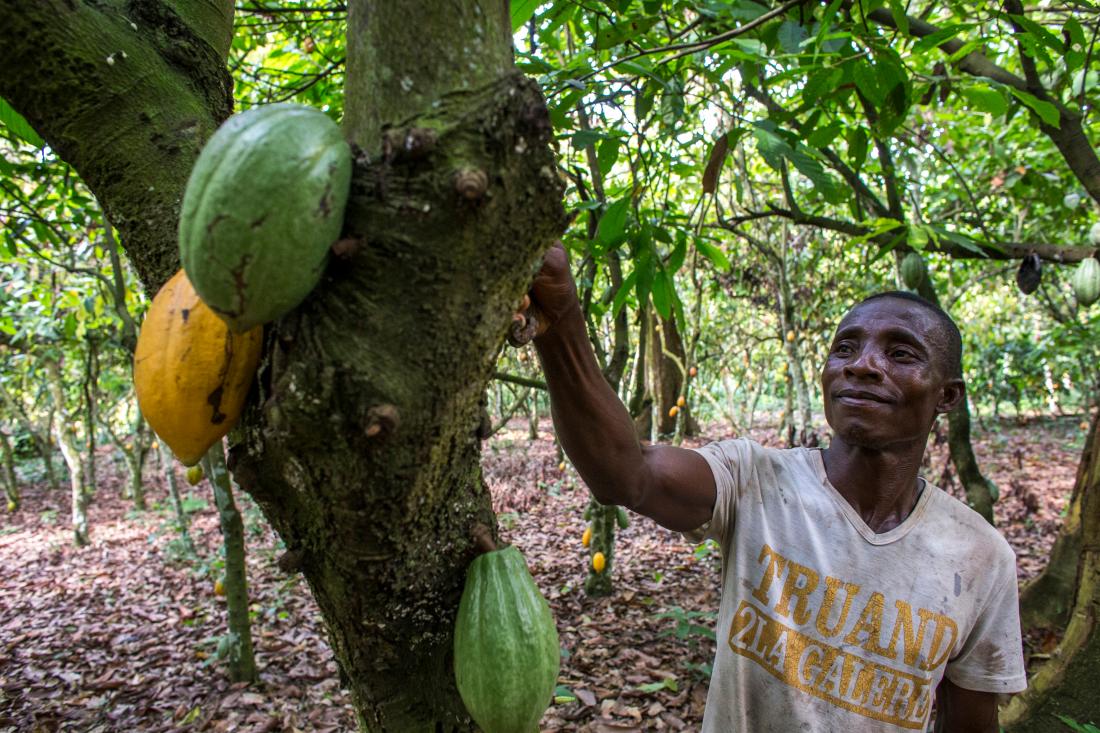 A farmer harvest cocoa in his plantation.
Photo: GODONG-PHOTO | Shutterstock.com

In partnership with five cocoa wholesalers, researchers conducted a randomized evaluation to test the impact of providing a bonus to traders on the prices that they offered farmers. The research team identified eighty of the traders who regularly do businesses with these wholesalers. Forty of these traders were randomly assigned to receive a bonus of SLL 150 (US$0.03) per pound of cocoa when selling cocoa to wholesalers, about 5.6 percent of the average wholesale price. The remaining forty traders served as a comparison group and did not receive any bonus payments. Traders received the bonus at the end of the harvest season, between mid-October and the end of December 2011.

Researchers used the prices offered and paid to farmers as a proxy for competition among traders as traders would need to offer similar amounts to compete with others and ensure that farmers continued to sell their harvest to them. In addition, researchers examined the pass-through of value from traders to farmers; traders passed on additional value they received in the form of bonus payments by offering higher prices to farmers or providing them with pre-harvest credit and a secure buyer.

Researchers conducted several surveys with the cocoa traders as well as a farmer listing in which traders were asked to identify the farmers they bought from, and whether they had provided the farmers with credit in the last twelve months. Researchers also collected information on both the quantity (weight of the cocoa bean bags) and quality (A, B, or C rating based on the examination of a sample of beans from each bag) of cocoa that traders brought to wholesalers from September to December 2011, after the harvest season had begun. The team also asked traders about the price per pound paid to the farmers and the village where the cocoa originated to measure the competitiveness of the market.

Overall, results suggest that the cocoa market in Sierra Leone was competitive. There seemed to be little differentiation between prices offered to farmers, and traders passed through value to farmers by offering pre-harvest credit through more advance payments.

Responsiveness to world prices: Results also suggest a high responsiveness of farmers’ revenues to the world price of cocoa. There was a stark reduction in prices paid to farmers (around 22 percent) in the final month of the intervention following a reduction in wholesaler prices and a decline in the world price. Traders, in turn, passed these expected changes in value onto farmers by offering them credit in anticipation of high commodity prices at harvest, further suggesting the competitiveness of the market.

As the study covered a single harvest cycle, researchers highlight that more research is needed to assess multi-seasonal price and market changes as farmers may choose to switch traders between seasons.