For new democracies and societies emerging from conflict, effective systems of dispute resolution are essential to maintaining a lasting peace and preventing violence. In Liberia, researchers examined the short and long-term impacts of introducing alternative dispute resolution (ADR) trainings on the rate at which community members resolved property disputes and the incidence of violence related to those disputes. In the long-run, dispute resolutions became less violent in communities that received the ADR workshops, despite no reduction in the overall incidence of property disputes.

For new democracies and societies emerging from conflict, effective dispute resolution mechanisms are essential to maintaining lasting peace. Without these systems, every land boundary, business deal, will, or loan could lead to a dispute, some of which turn violent. However, in contexts of weakened state presence, formal structures for conflict resolution, such as courts, usually do not exist and, those that do, are often unable to meet the needs of the entire population. As a result, many disputes are settled through informal institutions—governed by shared, unwritten rules of appropriate behavior enforced through social sanction and praise. Informal institutions, on the other hand, may produce resolutions which are biased towards the powerful and bargains that are difficult to keep, leading to a greater risk of violence.

In weak states, rebuilding and strengthening formal conflict resolution institutions can take decades. In the short term, what can states do to improve the quality of informal dispute resolution and reduce violence? Alternative dispute resolution (ADR) trainings offer a potential solution—by teaching a set of skills and practices that can help build community norms around how people should resolve disputes, ADR could help parties reach self-enforcing bargains faster than through formal court systems. However, there is little evidence of ADR’s effectiveness, or whether its impacts are sustained over time.

Between 1989 and 2003, Liberia’s civil wars killed hundreds of thousands and displaced the majority of the population. Well after the 2003 peace agreement, underlying tensions between tribes over land, especially in rural areas, continue to threaten the peace. As police and court systems remain inefficient and often corrupt, Liberians rely mostly on local informal institutions to settle disputes: among participants in this study, almost three quarters of those with land disputes had sought to resolve their dispute with an informal authority, such as local leaders, family members, and neighbors.

Without a central authority to mediate disputes, resolutions can be biased towards those with political influence and connections in the community, leading to disagreements and conflict. Additionally, unclear property rights due to poorly marked boundaries can lead to multiple claims on the same property—a problem which is exacerbated by the large number of records destroyed during the war. As a result, 40 percent of land disputes and 16 percent of non-land disputes  nationwide in 2011 remained unresolved, with 20 percent of those eventually turning violent. In response to these challenges, in 2008 the United Nations High Commission for Refugees (UNHCR) and an NGO, the Justice and Peace Commission (JPC), proposed a mass education program that would promote ADR in Liberian communities. 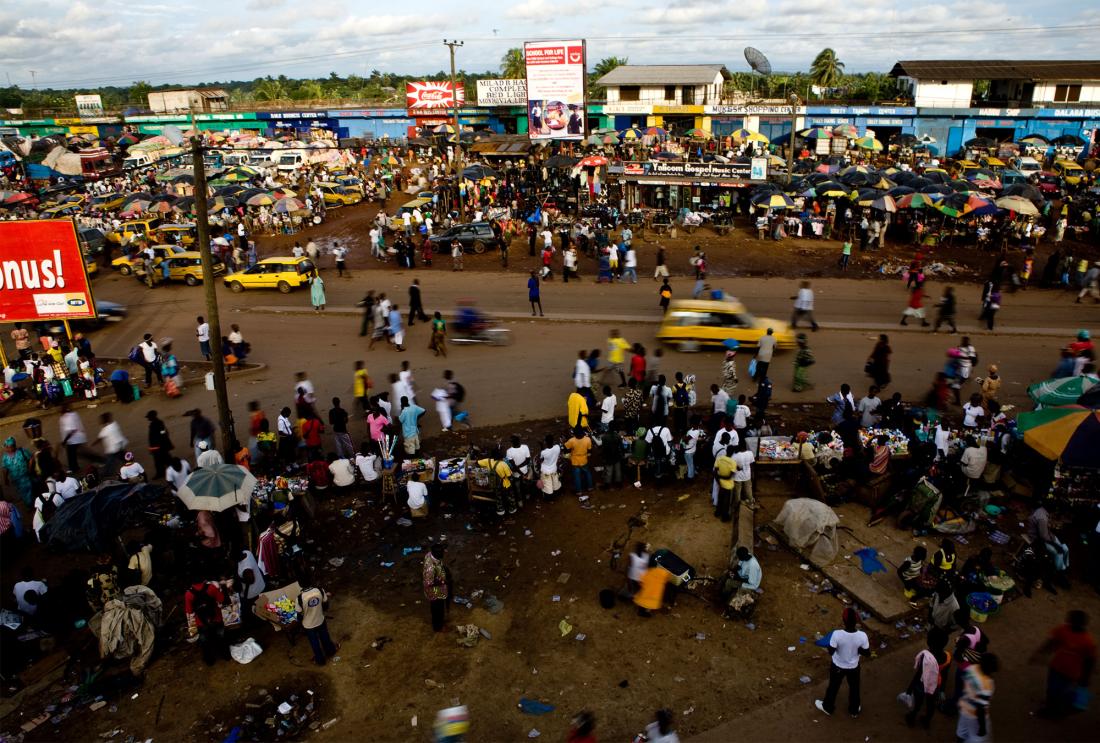 Researchers partnered with the Liberian Government, the UN’s High Commission for Refugees (UNHCR), and the NGO Justice and Peace Commission (JPC) to test the impact of ADR training workshops on property dispute resolutions and violence. The “peace education” program targeted communities within three of Liberia’s 15 counties—Lofa, Nimba, and Grand Gedeh—where the risk of violence associated with disputes was believed to be especially high.

Pairs of facilitators ran the ADR training workshops through eight day-long sessions, over the course of two months. During the trainings, groups of 35 residents, both men and women, participated in lectures, group discussion, and role-playing exercises. The workshops focused on teaching tools, skills, and practices to strengthen community members’ dispute resolution abilities. The trainings drew on a wide range of examples, but emphasized interpersonal disputes, especially land and neighbor disputes common to the area. Overall, the workshops aimed to strengthen informal methods of dispute resolution, such as decisions by customary leaders, and to train and encourage ordinary residents to negotiate their own disputes or mediate those of neighbors. Facilitators also encouraged participants to share and apply the lessons learned with other community members, as a way to influence norms and dispute resolution skills throughout the community. In total, the implementers trained more than 12,000 people in 2009–10.

To test the impact of the intervention, researchers randomly assigned the 246 communities included in the study to one of three groups1:

For the analysis, researchers collected survey data from nearly 5,500 community members on their dispute outcomes, property security, and investments. The first endline survey was conducted roughly one year after the intervention took place, between November 2010 and January 2011, and a second endline survey was conducted three years later, between February and April 2013.

Three years after the program, dispute resolutions became less violent in treatment communities. However, despite an initial increase in the rate at which disputes were resolved, the trainings did not affect the incidence of disputes in the long-run.

The trainings led to higher rates of property dispute resolution in the short-run, but not in the long-run: Communities assigned to receive ADR workshops experienced a two percentage point (29 percent) drop in unresolved land disputes one year after the program, relative to seven percent of individuals reporting unresolved land disputes in the comparison group. Among community members who reported having a land dispute in the past year, ADR trainings led to a 7.3 percentage point increase (11 percent) in the share of land disputes resolved in the community. However, reductions in dispute resolution did not persist three years later. The researchers suggest that this may have been due to the fact that, right after the end of the program in 2010, there were more longstanding disputes to be resolved, and the need for dispute resolution dissipated over time.

The program reduced hostilities and violence associated with interpersonal disputes: In communities that received the ADR workshops, land disputes were 5.1 percentage points (27 percent) less likely to result in property destruction one year after the program from a base of 19 percent in comparison villages. However, training appeared to only have had a systematic effect on violent communal disputes after three years. Overall, threats and violent acts fell by 1.2 percentage points (28 percent) in treated communities, and land disputes were 19 percentage points (41 percent) less likely to involve threats, property destruction, or interpersonal violence.    Communities that received the more intense trainings had an additional 1.9 percentage point reduction in violent land disputes. Researchers suggest this is in part because the program helped individuals internalize norms of non-violence, especially around managing emotions, making it easier to sustain peaceful resolutions.

Unequal power dynamics might have led to different impacts on property rights and security: Overall, more peaceful dispute resolution did not increase perceived property rights, security, and investment among community members either in the short- or long-term. However, these impacts seem to depend on status. Villagers with political connections did report better security as a result of the intervention, while poorer, less politically connected individuals, and those who did not own their land, felt slightly less secure in treatment villages.

The program reduced some forms of community-level disputes but might have encouraged other forms of violence: One year after the ADR program, witch hunts—a traditionally common (and now illegal) means of community punishment and justice—nearly doubled in treated communities: from 1.5 percent to 3.8 percent (an increase of 153 percent). These effects did not endure over time, with witch hunts and incidents of intertribal violence falling by more than 70 percent after three years. Additionally, communities that received the program experienced a 1.6 percentage point (912 percent) increase in violent strikes and protests, suggesting the program might have some adverse effects.

The program was relatively expensive: Researchers estimate that the program led to 1,269 fewer acts of violence. Given the implementation cost of US$1.2 million, this results in a US$946 cost for every act of property destruction or interpersonal violence. More cost-effective programs, such as radio, television, school curricula, and other mass media interventions could be a better option to disseminate ADR practices, but more research is necessary.