Organizations seeking to promote agricultural technologies often do so through extension agents, who are recruited from local communities to provide farmers with information about agricultural practices. Because extension systems often have limited resources and capacity, they tend to rely on social connections to further diffuse information about new technologies. Researchers conducted a randomized evaluation to test both the impact of BRAC’s extension program on economic outcomes and the role of social incentives in shaping the delivery of the program to farmers. While they found that overall, farmers in villages that received the program had higher agricultural profits, the number and type of farmers who were targeted depended on the political alignment between the selected and non-selected delivery agents.

The slow adoption of modern agricultural technologies such as improved varieties of seeds, fertilizers, pesticides, and livestock breeds is often cited as a binding constraint to raising agricultural productivity in sub-Saharan Africa. As a large fraction of the population works in agriculture, encouraging the adoption of these technologies could overcome persistent productivity deficits and in turn reduce poverty and catalyze economic growth.

Governments and NGOs seeking to promote new technologies often do so through agricultural extension agents, who are recruited from local communities to provide farmers with information about agricultural practices and the opportunity to try out new techniques. While the ability to recruit agents from local communities is key for the scalability and sustainability of agricultural extension programs, organizations may face challenges when these agents are embedded in existing social networks that could shape which beneficiaries receive services. Many existing studies look at the effectiveness of extension programs, but fewer examine the mechanisms that drive technology adoption and the roles of social incentives (such as positive or negative preferences for the welfare of others) in influencing the behavior of extension agents. For instance, different forms of self-identities, such as religious, ethnic, and political identities, can result in community divisions or disagreements and ultimately impact program delivery. How, in particular, can the social connections and political identity of eligible agents who are both selected and not selected to deliver extension services affect the targeting of the program, agricultural profits, and overall welfare?

Uganda’s agricultural sector is representative of most of rural sub-Saharan Africa. Two-thirds of the population worked in agriculture in 2012, and the majority of farmers are subsistence farmers. In this context, BRAC—one of the world’s largest NGOs—seeks to improve productivity for low-income women farmers through its agricultural extension program that promotes beneficial farming techniques and increases the availability of high-quality improved seeds. BRAC operates in 41 districts throughout Uganda, reaching 40,000 women farmers and employing more than 800 delivery agents (DA), who play a crucial role training farmers in the program. BRAC recruits (and trains) DAs among low-income women farmers based on their age, business skills, engagement in commercial agriculture, amount of land owned, agricultural knowledge, and social status within their villages. Once selected, all DAs receive six days of training as well as follow-up monthly refresher courses in crop production techniques, adoption of improved seeds, and pest control. In addition to the agriculture program, BRAC runs a microfinance program designed to target marginalized farmers who are credit constrained, enabling them to purchase improved seeds.

In South Western Uganda, where this evaluation took place, the majority of farmers are employed in subsistence agriculture. There is a low supply of improved varieties of seeds, including maize and bean varieties, the two main crops of the region. Improved seeds available at local markets are priced higher than seeds supplied by BRAC and tend to be of poorer quality. Prior to the evaluation, 93 percent of the farmers in the study knew about the existence of improved varieties of seeds and their potential to increase agricultural returns. Despite this high knowledge and perceived returns, two-thirds of the farmers had never used improved varieties of seeds at baseline, citing supply and cost as barriers to adoption. Additionally, communities in this region are deeply polarized along political lines, with near equal support for the two main political parties in Uganda. The majority of village elders in the study reported political affiliation to be the salient feature of individual identities and the basis of community conflict. 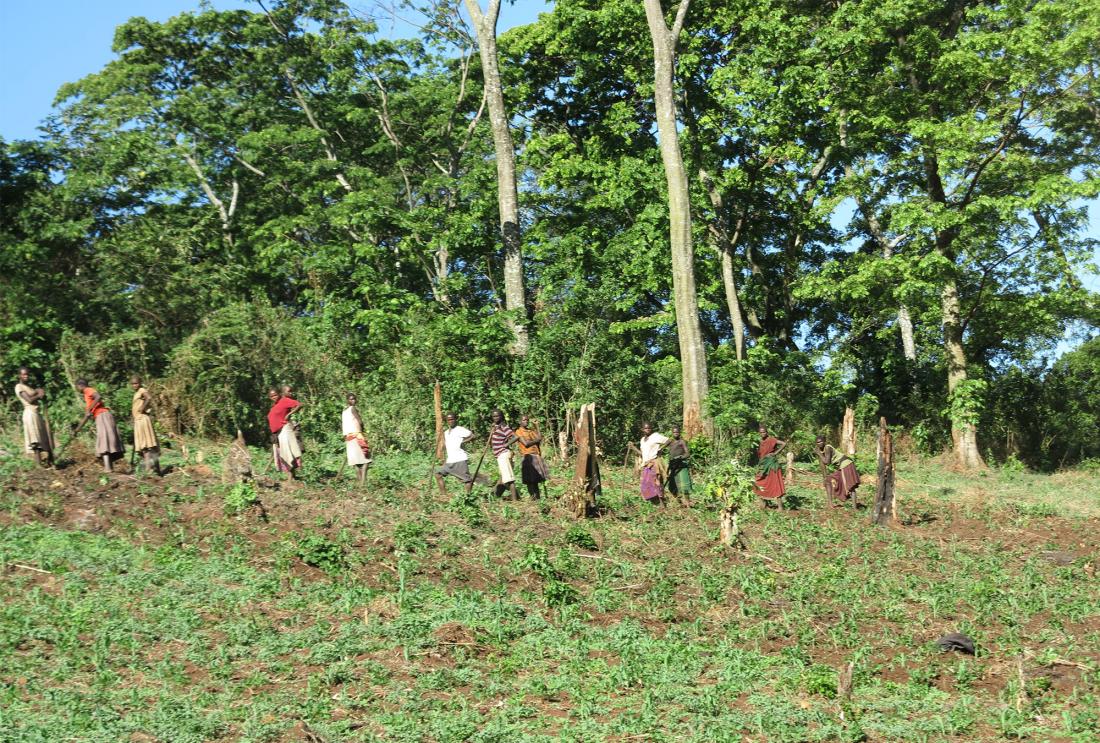 Researchers conducted a randomized evaluation to test both the impact of BRAC’s program on economic outcomes and the role of social incentives in shaping the delivery of the extension program to farmers. Researchers first randomly assigned 167 villages into one of three groups:

Among the 108 villages that received an extension program, two similar DA candidates were identified in each village, or in some cases, clusters of two or three villages that were proximate to each other. In about half of the communities, the two potential candidates belonged to the same political party, while in the other half they belonged to rival parties. In order to understand the effects of social incentives in program delivery, researchers then randomly selected one of the two candidates to deliver the BRAC extension programs to communities. Farmers with a social connection exclusively to the selected DA candidate were similar on average to farmers exclusively connected to the non-selected DA candidate; they had similar agricultural outcomes, food consumption, and use of improved seeds at the beginning of the study.

Researchers collected data on the delivery of services, targeting of farmers, household social connections to selected and non-selected DAs, and economic welfare outcomes such as agricultural profits.

Participation in the evaluation was voluntary, with informed consent obtained from all participants prior to the study. Researchers did not have any influence in the way programs were implemented and all data collection activities adhered to protocols around privacy, confidentiality, risk-management, and informed consent. The interventions did not pose any potential harm to participants and nonparticipants, or reduce their capacity to access future services or policies.

Overall, villages that received the BRAC extension program experienced an increase in agricultural profits and food expenditures. However, social incentives shaped the delivery of the program as wealthier farmers connected exclusively to the selected DA were more likely to receive services and benefit from the program relative to farmers who were connected to the non-selected DA, though this varies considerably with the political alignment of the agents.

Delivery of extension services: Farming households in villages that received either version of the extension program were 3.7 percentage points more likely to have received training on agriculture and 3.1 percentage points more likely to have received seeds from a DA in the past year relative to an average of 0 and 0.1 percent respectively, in the comparison group. However, there was considerable variation in the delivery of the intervention among villages: a majority of villages had near zero delivery of the intervention by DAs, while 15 percent of the villages had delivery rates that exceeded the informal targets set for DAs.

Economic welfare: Farmers in villages that received either extension intervention experienced a 44 percent increase from a base of UGX 76,960 (US$30.5 in 2014) in agricultural profits and a 26 percent increase in monthly food expenditures from a base of UGX 24,690 (US$9.80). These large impacts were partly driven by an increase in farmers growing marketable crops, thereby pulling them out of subsistence and enabling them to engage with agricultural supply chains.

Social incentives: A DA was more likely to deliver the intervention to farmers when she had greater social connections in the community, especially when the DA and non-selected counterfactual agent (CA) held opposing political identities. This suggests that communities with near zero delivery of the intervention were those in which the DA and CA were politically aligned and where the DA had few social ties.

Taken together, results suggest that DAs were prompted to deliver the program to more farmers when there was a divisive relationship between themselves and their CA. However, this came at the cost of DAs then being more likely to concentrate their targeting among wealthier farmers they were socially tied to, contrary to BRAC’s goals of targeting the poorest farmers. Thus, recognizing the role that social incentives play in driving the behavior of delivery agents can shed light on the circumstances in which development interventions drive inequality within and across villages. Further research is needed to expand on these issues raised, and develop a model of localized delivery of programs that is robust to personal divisions or rivalries.