Adequate housing is thought to provide a number of benefits, including greater satisfaction with one’s quality of life, better mental and physical health, protection against extreme weather, and improved safety and defense against crime. Researchers measured the impact of improving the quality of slum housing on household wellbeing in El Salvador, Mexico, and Uruguay. Residents were selected to receive housing upgrades by lottery. Results show that slum upgrading significantly improved satisfaction with quality of life. In two countries positive and significant effects are detected in child health. In El Salvador, significant and positive effects are observed in the perception of safety. Finally, no effects are detected in labor market variables and in the accumulation of durable goods.

The UN estimates that nearly one billion people, primarily in low- and middle-income countries, live in urban slums and lack proper housing. Slum houses are typically made of waste materials such as cardboard, tin, and plastic, have dirt floors, and lack connections to basic services such as water and sewer systems. Adequate housing is thought to provide a number of benefits, including better mental and physical health, protection against extreme weather, and improved safety and defense against crime. Improved safety and security may, in turn, allow households to accumulate assets and free up time for productive activities that would otherwise be devoted to protecting these assets. Better housing can also affect individuals’ sense of dignity and satisfaction with their quality of life, which may complement improvements in other dimensions. One way to address the challenge of inadequate housing is to upgrade slum dwellings with inexpensive yet durable materials such as concrete floors or tin roofs. Despite the widely held belief that housing has an important role to play in improving health and welfare, there is little rigorous evidence about how housing improvement programs can affect the welfare of participants.

This study measures the effect of a slum housing improvement program across three Latin American countries: El Salvador, Mexico, and Uruguay. Slums in these contexts are typically found in dangerous geographic locations, such as on cliffs or slopes, and lack access to basic services such as water, electricity, and sanitation. Residents are also exposed to significant levels of soil and water contamination and overcrowding.

Using baseline and national survey data, researchers identified several key differences between the slum populations and low-income households not living in slums. In particular, slum populations were worse off in terms of asset possession than other low-income populations, which tend to have better access to basic services and higher quality housing. These differences were most pronounced in El Salvador, the poorest country in the sample.

In Uruguay and Mexico, on the other hand, low-income slum dwellers tended to have significantly higher incomes than low-income individuals not living in slums. This could be because slums tend to form around large urban centers where there are more employment opportunities, and people who choose to live in slums may be more willing to accept worse living conditions in exchange for better access to the labor market. 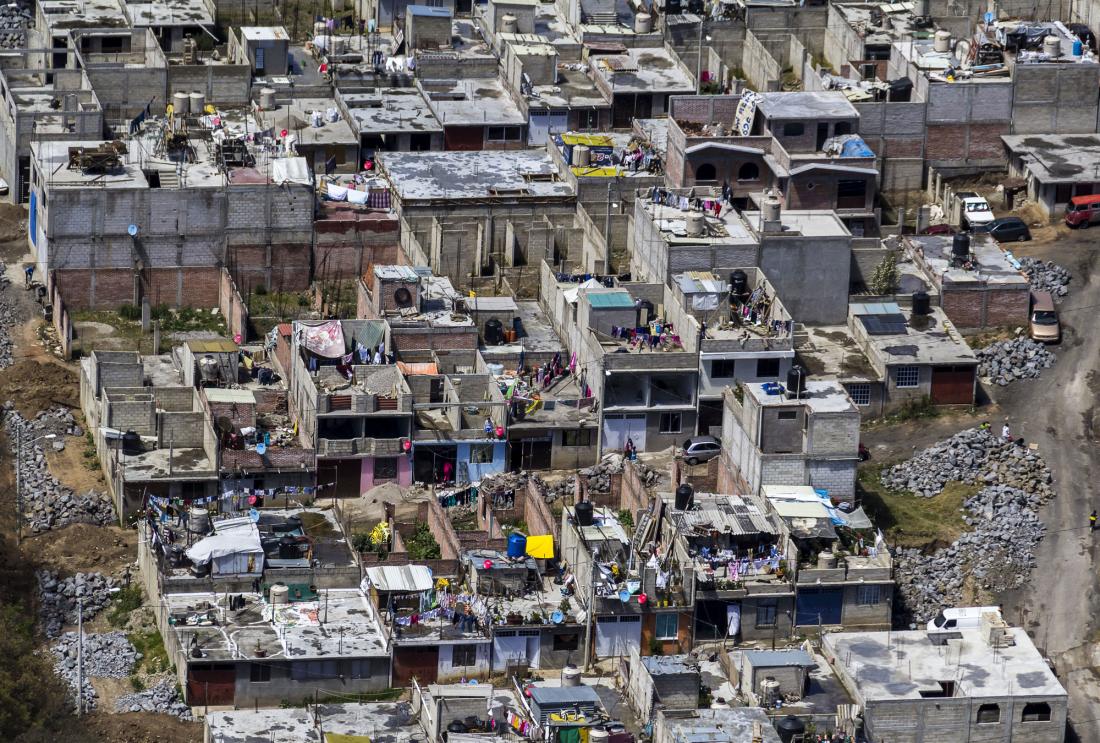 Researchers partnered with TECHO to evaluate the impact of upgrading housing infrastructure in urban slums in El Salvador, Mexico, and Uruguay. TECHO is a youth-led non-governmental organization that works across nineteen Latin American countries to provide basic, pre-made houses to people living in slums. TECHO targets families living in sub-standard housing facilities and provides them with basic housing structures as a part of a package of social services designed to help lift households out of extreme poverty.

The TECHO housing units are one-room houses made with insulated pinewood and tin roofs. Units are portable, constructed with simple tools, and can be set up by groups of four to eight volunteers. Although TECHO units are a major improvement over the recipients’ previous housing, they still lack plumbing, sewage, and gas connections. The cost of each housing unit is approximately US$1,000 and beneficiary households are expected to contribute ten percent of the total cost. In El Salvador, this is roughly equivalent to three months of earnings, while in Mexico and Uruguay it is closer to 1.4 months of earnings.

Informal settlements were eligible to receive TECHO housing if they had ten or more families living on public or private land and lacked access to one or more basic services such as electricity, water, or sewage. Within an eligible settlement, the poorest households were eligible to receive a housing upgrade. Due to budget and personnel constraints, TECHO conducted lotteries within eligible settlements to select which households would receive houses. From a sample of 2373 eligible households across all three countries, 1356 were randomly selected to receive housing upgrades and the remaining 1017 served as the comparison group.

Researchers conducted follow-up surveys between nineteen and 29 months after households received the improved house and collected data on self-reported satisfaction, safety, and health as well as labor market outcomes and possession of durable goods.

Impacts on quality of life: Families that received housing upgrades from TECHO were more satisfied with their homes and quality of life. Satisfaction increased by 15 percentage points across all three countries, a 29 percent increase over satisfaction ratings in the comparison group. Households in El Salvador experienced the largest gains in satisfaction with their homes, approximately 21 percentage points (41 percent), partially because self-reported levels of satisfaction were generally lower than in the other countries at baseline.

Impacts on children’s health: In El Salvador and Mexico, child health improved as a result of the TECHO program. Households reported a 4 percentage point (27 percent) decrease in the incidence of diarrhea from a base of 15 percent. There were no statistically significant improvements in child health in Uruguay, perhaps because the experiment took place in slums that were more urbanized with better access to basic services.

Researchers concluded that providing better housing in urban slums was fairly inexpensive and substantially increased life satisfaction across multiple contexts. They suggest that upgrading homes in existing slums should be considered as an option in addition to relocating residents to new houses farther away from urban centers given residents’ potential preference for proximity to labor markets.