Many developing countries are rapidly urbanizing, but a large portion of the urban poor lives in marginalized neighborhoods that lack access to basic urban services such as running water, electricity, sewage systems, and paved roads. Governments may be less likely to invest in infrastructure projects in these areas for both political and economic reasons: low-income residents may not have the political power to lobby for infrastructure improvements, and politicians may prefer to invest in central business districts, where they believe such projects are more likely to attract businesses and spur economic growth.

At the same time, improving infrastructure in low-income neighborhoods could have dramatic effects on living conditions for the urban poor. For instance, asphalting currently unpaved roads might increase property values and reduce the time and cost of traveling within the neighborhood or to the city center. Increases in property wealth could, in turn, make households more willing to take out loans to purchase items such as refrigerators or cars, and smoother transportation could help residents access better-paying jobs or work longer hours. However, there is relatively little research measuring the effects of public infrastructure investments on the lives of the poor.

From 2006 to 2009, J-PAL affiliate Marco Gonzalez-Navarro (University of Toronto) and Climent Quintana-Domeque (University of Oxford) partnered with the government of Acayucan, Mexico to conduct a randomized evaluation to measure the impact of a set of street pavement projects. 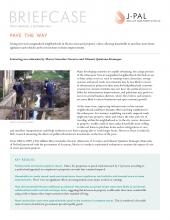