Government of Odisha partners with Breakthrough and J-PAL South Asia to introduce gender equity program in 23,000 government schools in the state 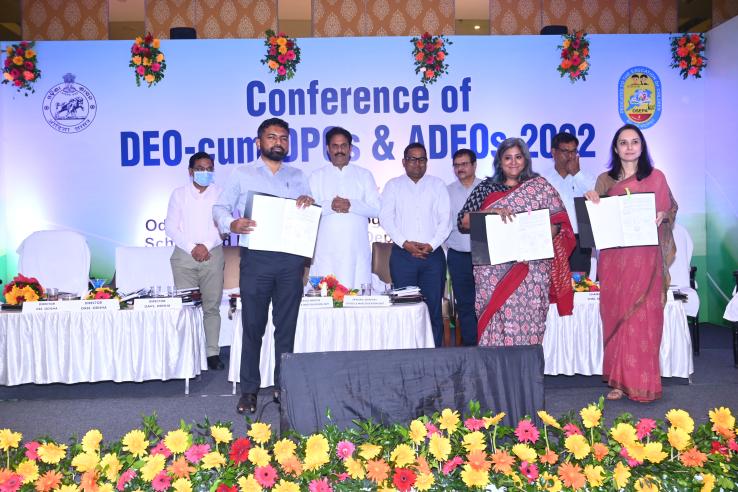 Bhubaneswar, 08 August, 2022: The Government of Odisha’s Department of School and Mass Education today announced its partnership with Breakthrough and the Abdul Latif Jameel Poverty Action Lab (J-PAL) South Asia to integrate a gender equity curriculum into the syllabus for students across government schools in the state.

The MoU was signed at an event today in the presence of Shri Samir Ranjan Das, Hon’ble Minister for School and Mass Education Department, Government of Odisha, Sohini Bhattacharya, CEO, Breakthrough, Shobhini Mukerji, Executive Director, J-PAL South Asia, and several other officials from the department.

Shri Samir Ranjan Dash, Minister, School and Mass Education, said: “Gender equality is very important. We are working on it.”

The curriculum, designed by the NGO Breakthrough, uses interactive classroom discussions to encourage adolescent boys and girls to reflect on culturally embedded gender norms, roles, and discriminatory practices to transform their gender attitudes, aspirations, and behaviors. Through this partnership, the curriculum will be integrated into the Social Studies syllabus for adolescent boys and girls from Grades 6 to 10 in over 18,000 middle and 5,000 secondary schools in Odisha by August 2022.

Shri Bishnupada Sethi, the Principal Secretary, School and Mass Education Department, Government of Odisha, said: "The inclusion of gender dimension in the school curriculum is a very notable step for Odisha. Despite the gains and progress India has made in gender equality, there are issues that continue to remain unaddressed even today. This intervention can bring about positive changes in the way we look at gender issues. And schools are the best places to start these conversations. We will have wide-ranging topics that will be covered in schools as part of this programme in our continued efforts to build a gender-equal world."

The curriculum was first evaluated by J-PAL South Asia in 314 government schools in Haryana and was found to shift the gender attitudes and behaviors of both boys and girls and lead students to enact more gender-equitable behaviors. The curriculum has since been introduced in multiple states in India, including Punjab where it is currently reaching 600,000 students annually in government schools across the state.

In Odisha, Breakthrough will work with the Department of School and Mass Education to contextualize and integrate the curriculum into the syllabus, train teachers and key departmental personnel, and conduct gender sensitization workshops with teachers across 23,000 state-run schools. The program will also leverage the Digital Infrastructure for School Education (DIKSHA), the Government of India’s open-access education technology platform, to train teachers, receive feedback from them, and engage parents in the sensitization process as well.

Sohini Bhattacharya, CEO, Breakthrough, said, “Breakthrough is honored to partner with the Government of Odisha and J-PAL South Asia to bring about systemic and lasting change in gender behaviors. Breakthrough, over the last 22 years has been working towards making violence and discrimination against women and girls unacceptable. We know that gender perceptions get formed at a young age and therefore, we need to ensure that children, especially those between the ages of 10-15 have access to the right information related to gender equality, legal rights, and healthy gender behaviors. The Gender Equity program aims to achieve this and has played a significant role in promoting gender-equitable behavior among school children.”

J-PAL South Asia will conduct independent monitoring activities to ensure that the programme is achieving its objectives and to generate insights for sustained, high-quality government implementation of the syllabus.

This programme is supported by the Global Innovation Fund as well as J-PAL South Asia and Veddis Foundation’s recently launched Alliance for Scaling Policy Impact through Research and Evidence (ASPIRE), which seeks to accelerate the adoption of anti-poverty policies rooted in scientific evidence and data.

Shobhini Mukerji, Executive Director of J-PAL South Asia, said, “Adolescence presents a crucial window of opportunity to change even deeply-rooted norms and instill more progressive gender attitudes. The Government of Odisha’s decision to introduce Breakthrough’s innovative gender equity curriculum across public schools in the state has opened the doors to a more equitable society, in which both girls and boys can imagine a more equal future for themselves.”

The implementation of the Gender Equity Programme is expected to significantly help in achieving the state’s Sustainable Development Goals (SDG) 4 and 5—namely, quality education and gender equality. The expected outcomes of the program include: positive gender attitudes and behaviours by both boys and girls, gender-equitable behaviours enacted by adolescents, teachers’ involvement  in building a gender-equitable school environment, parental value and investment in their daughters’ education,  more choices for girls regarding their education and future workforce participation, reduced school dropout rates for girls, increased age of marriage for women and the age at which their first child is born, improved sex ratio, and increased female labor force participation.

This program is a part of an ongoing partnership between the Government of Odisha and J-PAL South Asia, wherein since 2019, J-PAL South Asia has worked with state departments to facilitate rigorous, policy-relevant research and the scale-up of successful programs.

Press Release_Government of Odisha partners with Breakthrough and J-PAL South Asia to introduce gender equity program in 23,000 government schools in the state