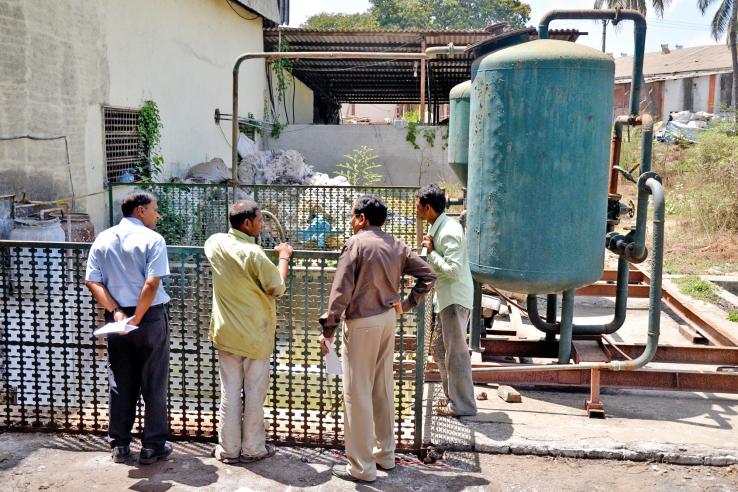 For Immediate Release, New Delhi, India – Environmental authorities in the Indian state of Gujarat reform their environmental auditing system based on findings from a large-scale study conducted in partnership with economists at Harvard, MIT, the University of Chicago, and Yale. The new guidelines issued by the Gujarat Pollution Control Board (GPCB) require environmental auditors to be randomly assigned to industrial plants and have their work double-checked for accuracy. These changes are part of those tested in the pilot study, which led auditors to report more accurately and industrial plants to cut pollution.

"Gujarat has a very strong commitment to environmental protection,” says Hardik Shah, Member Secretary of the Gujarat Pollution Control Board, who spearheaded the efforts to get the new audit guidelines approved and built the systems to scale them up. “The state is at the forefront of testing and implementing innovative policies that actually work, which is why we wanted to partner with this team of researchers. The visionary leadership of the state coupled with the strong evidence generated through the research has been a guiding force for implementing new ideas in our march towards sustainable development."

The study was conducted by Esther Duflo of MIT, Michael Greenstone of the University of Chicago, Rohini Pande of the Harvard Kennedy School, and Nicholas Ryan of Yale, in partnership with the Gujarat Pollution Control Board and the Abdul Latif Jameel Poverty Action Lab (J-PAL) South Asia. It found that making environmental auditors more independent improved the accuracy of audit reports on plant pollution. In response, audited industrial plants reduced their pollution emissions.

“The GPCB led the way toward real change by working with us to pilot reforms and testing whether they work in a rigorous way,” says Michael Greenstone, Director of the Energy Policy Institute at the University of Chicago. “This partnership is a model for how researchers and policymakers can work together more effectively to address real-world problems, not only in India but around the world.”

At the start of the partnership, neither the Gujarat environmental regulators nor the auditors themselves thought the status quo system was producing accurate information about pollution. For the regulators, this meant they were unwilling to take action based on audit reports.

“The partnership was successful because Gujarat authorities recognized the problem and decided to test some reforms before implementing them or scrapping the entire program,” says Pande, Director of Evidence for Policy Design at the Harvard Kennedy School. “This approach is important not simply for getting the design of a policy right, but for ensuring that it can be effectively implemented.”

The Gujarat system, like many auditing systems worldwide in sectors from financial services to hospitals, is based on third-party audits. Before the reforms, firms chose and paid their auditors directly. There was also no mechanism to scrutinize the quality of auditors’ reports. As a result, auditors that reported the truth were unlikely to be hired, especially by highly polluting firms that did not wish to be noticed.

The experiment increased auditor independence. In a pilot group of nearly 500 plants, the researchers randomly assigned some firms to maintain the status quo audit system and others to come under a new scheme where auditors were randomly assigned to plants, paid from a common pool, and had some of their field work independently double-checked. The double-checking enabled the researchers to compare audit reports to the true underlying pollution levels at industrial plants.

“What we found was truly striking,” says Nicholas Ryan of Yale. “Under the new system, auditors were 80 percent less likely to submit a false pollution reading.”

Esther Duflo, Director of the Abdul Latif Jameel Poverty Action Lab (J-PAL) at MIT, points out something even more promising.

“In response to regulators having more accurate information, the dirtiest industrial firms actually reduced their pollution,” Duflo says. “We are so pleased to hear that key components of this proven system are now being implemented throughout the state.”

The researchers are continuing to work together with officials in Gujarat and throughout India to help tackle the country’s pollution and energy access challenges.

The Abdul Latif Jameel Poverty Action Lab (J-PAL) was established in 2003 as a research center at MIT’s Department of Economics. Since then, it has built a global network of more than 120 affiliated professors and regional offices in Africa, Europe, Latin America and the Caribbean, North America, South Asia, and Southeast Asia. J-PAL’s mission is to reduce poverty by ensuring that policy is informed by scientific evidence. It does this by working with governments, non-profits, foundations and other development organizations to conduct rigorous impact evaluations in the field, policy outreach to widely disseminate the lessons from research, and building the capacity of practitioners to generate and use evidence. Over 202 million people have been reached by the scale-up of programs evaluated by J-PAL and found to be effective.