Evaluating the Camden Core Model: How a research partnership between the Camden Coalition and J-PAL North America was built 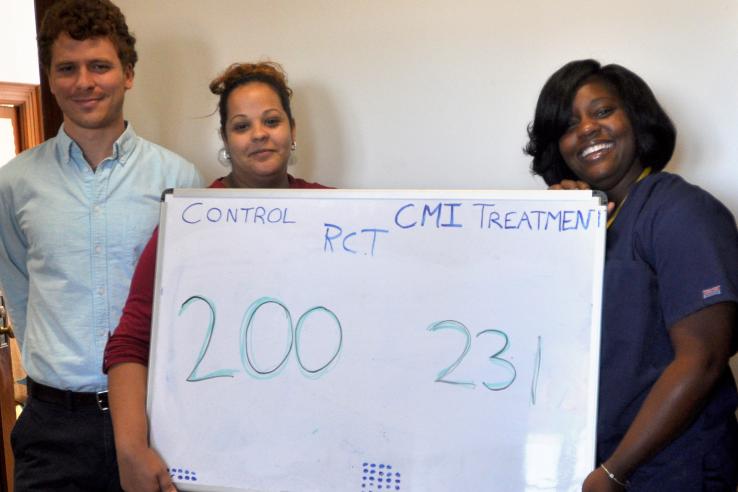 Researchers from J-PAL’s network partnered with the Camden Coalition of Health Care Providers (the Camden Coalition) on a rigorous evaluation of their Camden Core Model. The Camden Core Model has received national attention as a promising super-utilizer intervention over the past few years.  We sat down with Kathleen Noonan and Aaron Truchil, the Camden Coalition’s CEO and Director of Strategy and Analytics respectively, and Amy Finkelstein, Co-Scientific Director of J-PAL North America and the Principal Investigator of the study, to go behind the scenes of this research partnership and share their thoughts on what they have learned through the process.

In this first blog of our two-part series on the Camden Core Model evaluation, we explore the impetus behind the study and how a strong partnership between the researchers and practitioners paved the way for a successful evaluation. In part two of the series, we reflect on key learnings from the evaluation and how study results will inform the future of Camden’s work and the broader field of healthcare delivery and complex care.

Kathleen: The Camden Coalition is an organization that is dedicated to inquiry and field-building. We really welcomed the opportunity to incorporate a rigorous evaluation of our model. We felt that conducting a randomized controlled trial (RCT) of our program was a way to add to the growing body of knowledge in the emerging field of complex care.

Aaron: Our work has been focused on breaking down the silos between care systems. Fragmentation across health and social service providers seemed to be what was getting in the way of improved outcomes for our patients, and we knew we weren’t the only ones struggling with this question. Even though our program was still evolving, our health systems and community partners were willing to test our theory of change alongside of us, so it was a “right time” opportunity.

Kathleen: We are a coalition of hospitals, community-based organizations, and Camden residents. It's part of our identity to be a learning organization. Without our partners supporting the organization and the idea of evaluation, we wouldn't have been able to do this work.

Amy, why were you interested in working with the Camden Coalition on this evaluation?

Amy: As an economist, I don't have particular insight into how to design care management or transition-to-care programs to better serve the super-utilizer population. But when I see organizations that have an idea about how to achieve this, I’m very interested in partnering with them to rigorously evaluate and learn from what they're doing.

However, not many organizations have the vision and courage to rigorously evaluate their program and apply those learnings to improve going forward. The Camden Coalition was a dream partner because they were willing to engage in rigorous evaluation, they were interested in looking at the data, and they were comfortable taking educated guesses so we could quickly scope out whether a partnership was feasible.

How did the research partnership between the Camden Coalition and J-PAL North America come about?

Aaron: We were first connected through a mutual colleague who played matchmaker, seeing the potential synergy between researchers looking for potential high impact RCTs and an organization motivated to test its model. After a few phone calls with the J-PAL team, it was clear to our team that this was a great opportunity to collaborate with a high-quality research team and publish findings that were very important to the field. We had a stable funding window for the Camden Core Model and knew we were going to be running the intervention long enough. After gaining buy-in from our partners and staff, we started working with J-PAL.

After you decided to move forward, how did the collaboration continue to be successful?

Aaron: We spent a tremendous amount of time in that early phase on planning and implementation. Amy and others from the team were on site and going on home visits, speaking with a wide variety of our staff to get a sense of what the model looks like and what challenges our patients faced. They were also very helpful in figuring out some of the necessary logistical components, including modifying our various databases to accommodate the RCT needs. It was really a collaborative process that relied on our team to keep a close eye on day-to-day things and J-PAL staff to be responsive and work closely with us to troubleshoot.

Amy: The traditional J-PAL model emphasizes that if you’re not going to be on site every day, you need to hire staff members who can be there to make sure the protocols are being followed. But it quickly became clear that we didn’t have to follow this model because Aaron and the Camden Coalition staff were so on the ball about communicating with us from the ground.

What was exciting, as well as challenging, about partnering on this evaluation?

Kathleen: Most nonprofits of this size don't have the capacity or resources to be able to do this type of study. We were already an organization that was interested in learning, and committed to the use of data, but this process made us more sophisticated and built up our capacity even further to be able to think about these types of research questions and how to adapt and grow from the results.

Aaron: Distilling our intervention to just one specific metric was a tension that we continually confront. The primary metric in the study was the hospital readmission rates of our participants six months after discharge, which is important in the conversation around healthcare and reducing overall health care costs. However, we see health holistically, so we knew that we were going to be missing some other critical parts of the story about the impact our intervention has on people's lives and healthcare. It was a tradeoff we had to make to study this one measure that was important to the field.

Amy: The time it took to recruit the 800 study participants was longer than we had jointly expected, which was a challenge in terms of staffing, funding, and the delay of study results. However, it gave us an excuse to have a continued, long-term engagement with the Camden Coalition. During this time, the Camden Coalition introduced J-PAL researchers to prospective partners that were also data-driven and interested in rigorous evaluation. The Camden Coalition explained how a partnership with us could be a valuable and mutually beneficial experience, giving credibility to us as researchers.