The Impact of Information Provision on Farmer Decision Making in Indonesia

Despite seeing the impact of farming input choices on each harvest, many farmers, even with substantial experience, do not adopt optimal agricultural practices. In Indonesia, researchers conducted a randomized evaluation with seaweed farmers to observe both the impact of participating in a program that determined optimal seaweed production methods and receiving summarized results of the program on the adoption of optimal farming inputs. Simply participating and observing outcomes in the program did not change key input choices in the production of seaweed. Instead, farmers changed their practices only after they were presented with summaries on results from the program.

Despite seeing the impact of farming input choices on each harvest, many farmers, even with substantial experience, do not adopt optimal agricultural practices. An important constraint for farmers in learning to adopt these optimal techniques may stem from having to pay attention to several variables that might affect crop production. For instance, a farmer must decide on the timing of planting and watering, the depth and spacing of seeds, the amount of fertilizer used, as well as the pressure of soil on seedlings among other things. Given the number of variables, farmers may be inattentive to certain details about the cultivation process if they believe that the information is unlikely to be useful or if paying attention would take too much of their time. Failing to learn by not noticing information from each harvest could lead to large losses for farmers who continue to use suboptimal agricultural practices. Can information that helps farmers notice new or previously neglected dimensions of the production process help them learn to adopt optimal farming techniques?

Seaweed farming has been prominent in Nusa Penida district in Bali, Indonesia since it was introduced during the 1980s. Seaweed farming shares essential features with farming other crops, where many different decisions over inputs and timing add up to determine yields. Most seaweed is cultivated by taking raw seaweed and cutting it into pods, which are then planted at intervals along the ocean floor. The size of the pods and distance between them are determined by the farmer. Due to its relatively short crop cycle of 35 to 40 days, seaweed cultivation provides farmers with ample opportunity to learn through experimentation and implement new techniques.

The majority of farmers in the study were literate and had been farming seaweed for eighteen years on average, with half reporting that they learned to farm from their parents. Farmers were attentive to some critical input dimensions of seaweed production such as the distance between pods on a line, distance between lines, and optimal cycle length. On the other hand, farmers were less attentive to other dimensions such as pod size, indicated by the large variation in pod sizes observed within plots. Among farmers included in the study, 86 percent were unable to provide information about the pod sizes they used or what they believed to be the optimal pod size for seaweed cultivation. 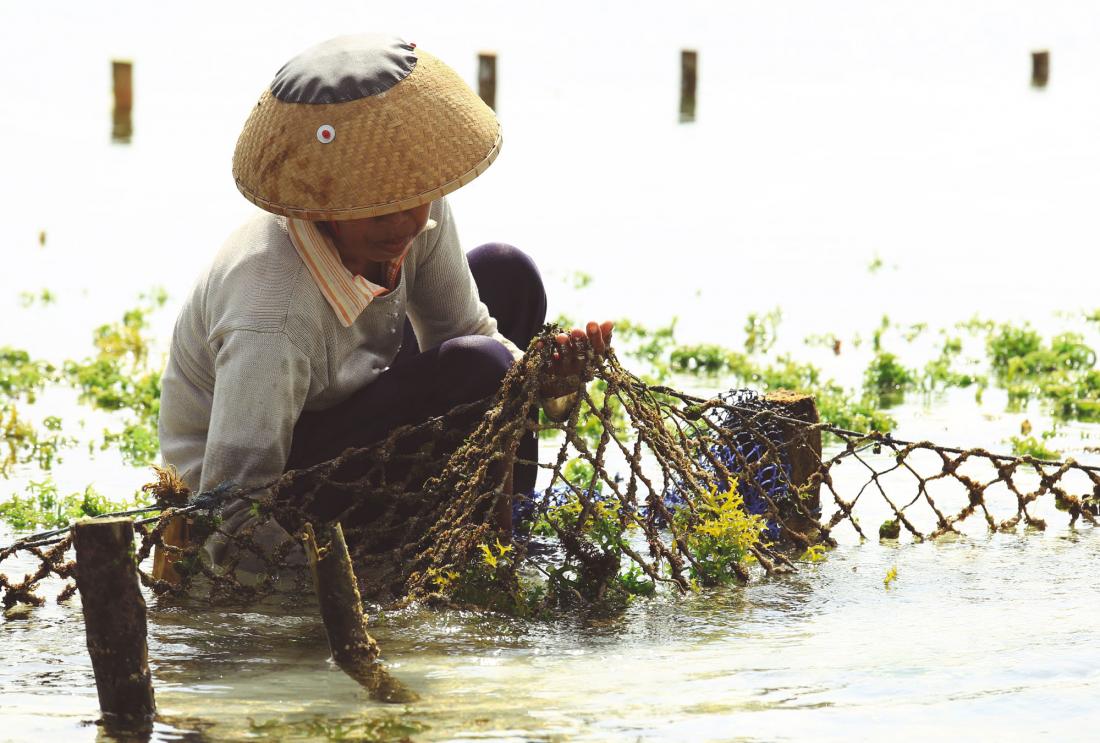 Researchers conducted a randomized evaluation with seaweed farmers to observe both the impact of participating in a program that determined optimal seaweed production methods and receiving summarized results of the program on the adoption of optimal farming methods. From a sample of 489 farmers, researchers randomly assigned 232 farmers to one of three groups:

Farmers who participated in the sort and weight programs observed and assisted enumerators with planting, weighing, harvesting, and recording the results. Additionally, these farmers received compensation for their participation in the form of farming inputs, a guaranteed income from the plot they cultivated as part of the program, and a small gift worth US$1.

Researchers conducted a follow-up survey from April to May 2008 to test whether farmers changed any of their farming methods after participating in the program. After the first follow-up survey, enumerators talked through results on returns from different farming methods with the farmers, in addition to providing them with a written summary. Two months after the results were distributed, researchers conducted a second follow-up survey to determine whether farmers had changed their methods as a result of having received the summary.

Overall, simply participating in the program did not induce any changes to key input dimensions in the production of seaweed. Instead, farmers reported changing production techniques only after they were presented with summaries on results from the program.

Farming optimization: Consistent with the dimensions they were inattentive to the results from the program indicate that farmers were not optimizing pod size. Among farmers in the weight program, researchers estimated that adopting the optimal pod size would increase their income by 37.9 percent on average, compared to the average pod size. Researchers estimated that the income gained from moving from the average pod size used by farmers prior to the evaluation to the most optimal size was 37.9 percent among farmers in the weight program. Farmers performed better in setting their distance between pods—a dimension they seemed to notice prior to the evaluation. Results from the weight program indicate that for 80 percent of farmers, the optimal distance between pods was 15 cm, which was the distance most farmers were already using.

Farmer learning: Participation in the program alone did not induce a significant change in farming techniques, even though farmers were present for, and in some cases even helped with, the weighing and recording of results. This suggests that learning through observation and experience does not always guarantee effective use of technology.

On the other hand, farmers in the study reported making large and significant changes in their production techniques after receiving summarized trial results and specific recommendations about which pod size or weight improved yields. After receiving the summaries, about 16 percent more farmers reported changing their cultivation techniques. For example, farmers who participated in the sort program increased their pod size by 7 grams (a 7 percent increase) relative to the comparison group which is in accordance with the average change in pod size recommended by enumerators. Thus, while farmers did not appear to consider pod size as part of the production process prior to the program, providing summary information on the relationship between optimal pod size and yield, appeared to change their use of this input. The fact that the summaries had no effect on the distance between pods was consistent with what researchers hypothesized given that farmers were already attentive to pod spacing and were using optimal distances prior to the program.

Taken together, results show that farmers did not use the optimal level of inputs along dimensions they were inattentive to. However, summaries that explicitly highlighted dimensions of the cultivation process farmers were overlooking may have encouraged them to attend more closely to information from each harvest. This suggests that there may be large benefits from interventions that help individuals understand the relationships in the data they already have access to.