Police forces in cities tend to focus their efforts on the highest-crime areas, but increasing state presence in the highest crime spots may simply displace crime to other areas, leaving overall crime levels unchanged. In Bogotá, Colombia, researchers partnered with the city to measure the impact of either concentrated policing, increased municipal clean-ups, or both on crime reduction and displacement. The evaluation found that the two approaches reduced crime on targeted streets when implemented together, but not when implemented alone. While most crime, particularly property crime, appears to have shifted to nearby streets, there is suggestive evidence that violent crimes, especially homicides and rapes, decreased citywide as a result of the intervention.

In most cities around the world, crime is concentrated in a small number of places, which police often call crime “hot spots.” Hot spots policing, in which police spend increased time in higher-crime areas, has become one of the most common approaches to crime reduction—more than 90 percent of police agencies in the United States use a version of this method. A related geography-based approach is for municipalities to spend increased time cleaning up especially disordered areas of the city. This technique follows the “broken windows” hypothesis, which suggests that trash, graffiti, broken windows, and other signs of disorder suggest to would-be criminals that there is little law enforcement in the area, thereby making crime occurrence more likely.

While several studies have suggested that these geography-based approaches are effective,1 it is difficult to study their full impact. Such strategies may reduce crime in hot spots, but they may also unintentionally encourage criminals to move to other, less-policed areas, leaving the overall level of crime in the city unchanged. To understand better the implications of crime spillovers, it is important to analyze large interventions. This study is, by an order of magnitude, the largest hot spots policing experiment ever conducted.

Like in many major cities, crime in Bogotá, Colombia is spatially concentrated. Two percent of Bogota’s 137,000 street segments, a block of street between two intersections, accounted for all homicides between January 2012 and September 2015. During the same period, these streets received roughly 10 percent of police time and limited public services.

Although the security situation has improved in recent years, crime in Bogotá remains a major social concern. The homicide rate in Bogotá was 15.6 per 100,000 inhabitants in 2016, comparable to the rate in Chicago (15 homicides per 100,000 inhabitants), but considerably lower than some of the world’s most violent cities, such as Caracas (120 homicides per 100,000 inhabitants). Moreover, safety and security for Bogotá residents has lagged behind the large improvements for those living in other areas of Colombia. In fact, in a 2015 ranking by the Economist Intelligence Unit Bogotá was deemed to have the third-worst quality of life in Latin America, surpassing only Guatemala City and Caracas.2 When Bogotá’s mayor Enrique Peñalosa took office in January of 2016, he promised to confront crime and violence in the city’s 750 highest-crime streets. 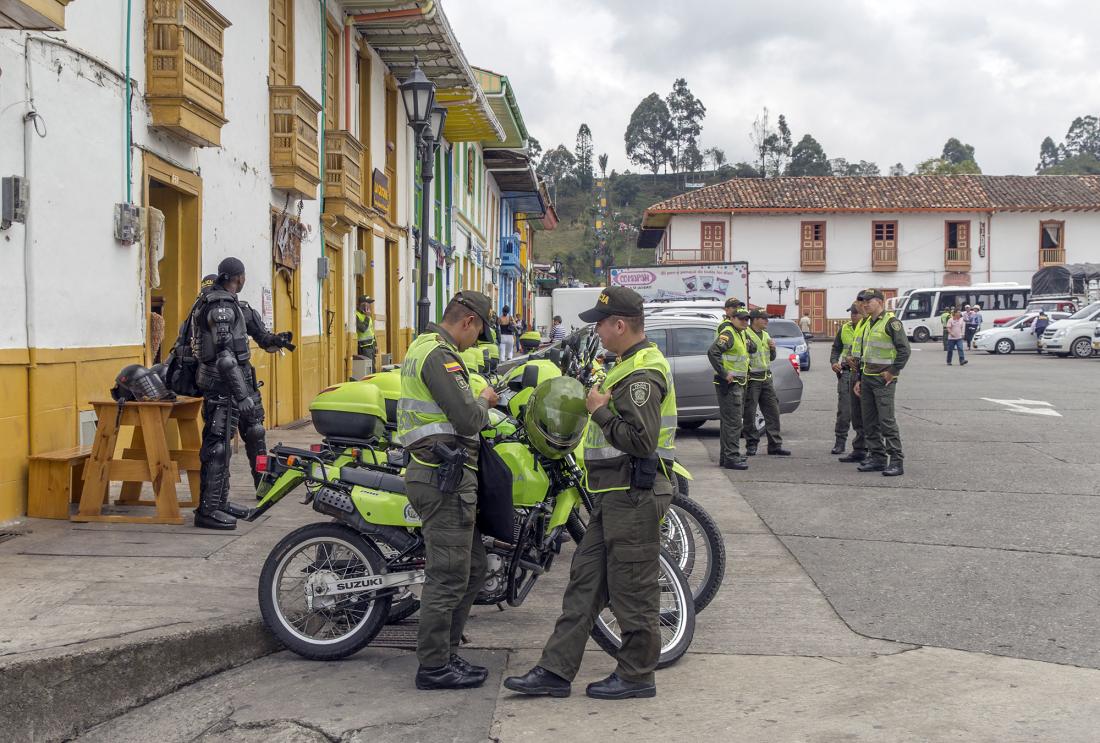 Researchers worked with Innovations for Poverty Action, Bogotá’s police department, and Bogotá’s mayor’s office to conduct a randomized evaluation measuring the impact of increased policing and municipal clean-ups on crime and citizens’ perception of the police in targeted and adjacent areas. After working with police to identify 1,919 of the highest-crime street segments in Bogotá, researchers randomly assigned the street segments to one of four groups:

Overall, the evaluation found that when the city concentrated police patrols and cleaned up streets, crime went down on the high-crime streets that directly received those services. Most crime appears to have displaced to nearby streets, however, offsetting the positive results. There is some indication violent crime went down overall, but further research is needed to be conclusive.

Neither hotspot policing nor municipal clean-ups led to decreases in crime when implemented individually. It is possible that each intervention alone had no effect on reported crimes in targeted streets.

However, there is evidence crime simply moved to nearby streets, offsetting most of the positive results. The results suggest that crime may have slightly increased in each of the more than 77,000 streets located within 250 meters of treated streets. When the direct and displacement effects are added together, the results rule out more than a 2-3 percent improvement in city-wide crime.

Property crime, more than violent crime, appears to have displaced to other areas. The results suggest that crime displacement was driven mainly by (economically-motivated) property crime, not by violent crime. Violent crimes seem to fall in aggregate, though these results are ambiguous and should be taken with caution. There are indications that homicides and rapes, some of the costliest crimes, went down citywide by 5 percent.

Combining both interventions together led to a large decrease in reported crimes on targeted streets. There was a decrease of about 57 percent in the number of reported crimes in streets that received with both intensive policing and municipal services at the same time. This estimate is based on a small number of streets; however, hence we take these interaction effects with caution.

Given the challenges of precisely measuring crime spillovers and displacement, further research––particularly a randomized evaluation across cities that estimate city-wide impacts––is needed to better understand whether place-based tactics are effective at crime reduction.