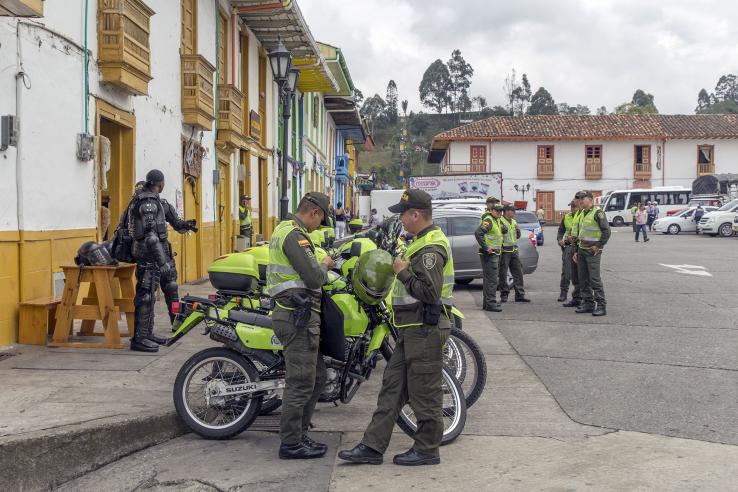 How can we make cities safer? Unlike institutional systems like education or healthcare, which regularly collect data on activities and outcomes, crime can be more difficult to track or measure due to its concealed nature. Moreover, while crime is rampant in some countries, little is known about how to cost-effectively reduce it. Supported by J-PAL’s Government Partnership Initiative (GPI), governments in Bogotá, Colombia and Rio de Janeiro, Brazil are collaborating with J-PAL affiliated professors to improve citizen security by incorporating evidence into the cities’ policing policies. These projects will generate knowledge to support decisions on effective policing (in Bogotá) and reducing police violence (in Rio de Janeiro).

In Bogotá, 59 percent of residents report feeling insecure in the city—a sharp increase from 24 percent in 2008. To better understand which security policies are most effective, the Mayor’s office of Bogotá will run several randomized evaluations. These evaluations will involve collaboration with J-PAL affiliated professors Chris Blattman (University of Chicago, Co-chair of J-PAL’s Crime & Criminal Justice Sector) and Don Green (Columbia University), along with Daniel Mejia (Universidad de los Andes), Daniel Ortega (Latin America Development Bank), and Santiago Tobón (Universidad de los Andes), and will be implemented by IPA Colombia. Two rapid randomized evaluations are currently underway. One evaluation examines “hotspot” policing, where police focus on and increase patrolling in areas with particularly high crime rates. A series of rigorous evaluations over the past two decades have argued that hotspot policing can be effective at reducing crime; this intervention is one of the first of its kind in Latin America. The second study evaluates a “broken windows” intervention, which improves municipal services, including streetlight repair, non-artistic graffiti removal, and garbage collection, on crime levels in hotspot neighborhoods. In addition to helping the Mayor’s office determine the effectiveness of hotspot policing and municipal investments at reducing crime, these projects will also serve to identify any displacement effects, shifts in crime to other locations that are not subject to hotspotting.

These projects contribute to a little studied area of policy: which policies can most effectively reduce crime and police violence in developing country cities. The knowledge generated through these evaluations will not only be of interest to the governments of Bogotá and Rio de Janeiro, but could ultimately serve to inform additional governments’ decisions that improve the security of citizens. Learn more about GPI’s other funded projects and J-PAL’s Crime & Criminal Justice Sector.