In many native Amazonian communities, money is becoming an increasingly important part of
the village economy. However, savings culture and financial tools to promote the accumulation
of money for larger purchases and emergencies do not exist in many of these communities.
Centering on one native Amazonian society (Tsimane’) and partnering with a Bolivian non-
profit, researchers evaluated the impact of providing Tsimane’ households with lockboxes on
their savings activity, consumption, and well-being. Providing lockboxes increased household
financial assets but had no impact on total household expenditure; receiving lockboxes also
increased alcohol consumption and blood pressure.

In many indigenous communities throughout Latin America, traditional economies based on barter and reciprocity are rapidly becoming monetized. This is especially true in the Amazon basin, where the construction of new roads and encroachment by cattle ranchers and farmers give native Amazonians increasing exposure and access to money. Many governments have also introduced wage-earning teachers, child support subsidies, and social security to the elderly in these remote areas. As a result, in indigenous Amazonian communities where most people still depend on hunting, fishing, plant gathering, and slash-and-burn farming, money is becoming an increasingly important part of the village economy. However, savings culture and financial tools to promote the accumulation of money for larger purchases and emergencies do not exist in many of the communities. Previous research suggests that providing access to products that help people to save small amounts periodically may reduce their purchase of temptation goods like alcohol and cigarettes. Can providing indigenous households with savings boxes increase their savings activity, consumption, and household wellbeing? In communities where alcohol is a social good that carries prestige, could an increase in savings lead to increased alcohol consumption?

Tsimane’ are a native Amazonian society in the Department of Beni, Bolivia. While they have been in contact with the West for centuries, Tsimane’ have maintained a largely self-sustained society. Most members live in villages of about two dozen households, marry cross-cousins, and are far from the nearest market town. Their economy is based on horticulture and members primarily save for small livestock like pigs and poultry and crops like plantains and manioc. Savings is not particularly common; at the start of the intervention, 37 percent of households had cash and four percent used a bank.

In Tsimane’ culture, alcohol is a social, prestige-enhancing good. The alcohol available to the villagers are commercial alcohol from the nearest town and chicha, a home-brewed alcohol from staple crops that is produced by women and consumed only in villages. Protestant missionaries who settled in the region and continue to work with the Tsimane’ by running a local radio station, a clinic, and religion courses, have discouraged alcohol consumption. However, Tsimane’ still drink commercial alcohol and prepare and drink chicha because it confers status.

The Centro Boliviano de Investigación y Desarrollo Socio Integral (CBIDSI) is a nonprofit organization in the town of San Borja, Department of Beni, Bolivia, that works directly with Tsimane’ and have supported researchers in the field to carry out observational and panel studies and several randomized evaluations among Tsimane’. The research team chose villages that were not too costly, remote, or unsafe to visit, and that did not have other ethnic groups, which could aid the generalizability of the study. All households in the selected villages were eligible to participate, as advertised on the local radio station before the intervention started. Those who participated were headed by two adults with equal decision-making power. 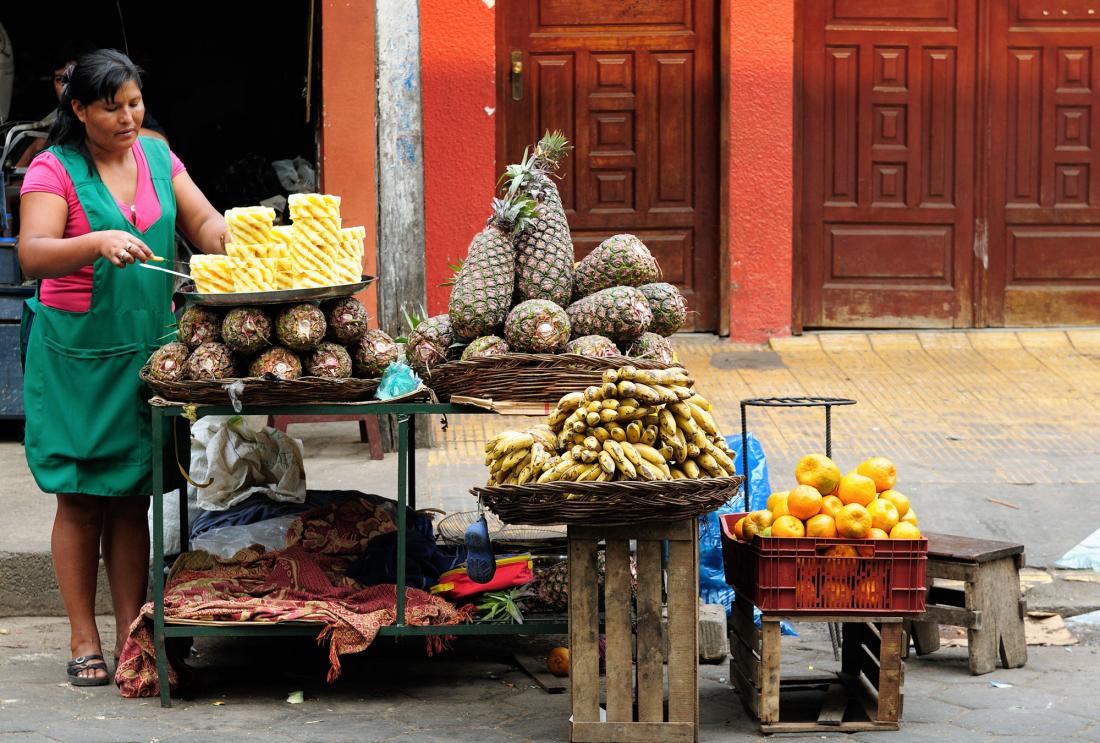 Researchers collaborated with CBIDSI and the governing council of Tsimane’ to evaluate the impact of lockboxes on savings habits of households.

The study included 1,086 Tsimane’ households headed by two adults in 61 villages. The researchers randomly assigned the participants into the following groups in roughly equal proportion within each village:

The lockboxes and plates were randomly given to either female or male heads of households from March through June 2011. One year later, the researchers conducted a follow up survey focusing on eight outcome measures: financial assets, physical assets, agricultural investments, income sources, expenditures, conflict within the household, consumption of tobacco and alcohol, and blood pressure. Following initial data analysis, in May 2013, the team conducted an ethnography—qualitative studies involving observations, interviews, surveys that explore cultures and customs, and scans or spot observations of behavior—about the identified connection between participants’ savings and alcohol consumption.

In addition to receiving ethical review and approvals from an institutional review board, researchers made efforts to address and account for ethical questions by working closely with a research field manager who had a PhD in cultural anthropology from the University of Florida and had 16 years of living and doing researching among the Tsimane' at the onset of the study. The researcher headed CBIDSI, had done his dissertation on Tsimane’ horticulture, and had written a book on Tsimane’ supernatural beliefs.

Financial Assets: Researchers found suggestive evidence that for households that received a lockbox, financial assets increased by 78 bolivianos (US$26.00 PPP) from 200 bolivianos (~US$67.00 PPP) at the start of the intervention, whereas the comparison households had 129 Bolivianos (US$43.00 PPP). Surveys suggest the increase in financial assets was driven by households increasing the amount of cash they held at home and reducing the amount of money they lent to others.

Overall Household Expenditure: There was no measurable impact on household expenditure. Most participants reported in the follow-up surveys that they did not spend the saved money from the lockboxes. Participants who spent the saved money indicated it was for medicine and hygiene, food, and clothing. The lack of impact on expenditure combined with the increase in financial assets suggests that the lockbox increased households’ net saving and wealth.

Other Economic and Social Outcomes: There were no detectable impacts on physical assets, agricultural investments, change in income sources, or household conflict.

Drinking was self-reported in surveys when it wasn't linked to saving, as it is considered a social, prestige-enhancing good in the community. However, drinking commercial alcohol was not self-reported as a motivation for saving, likely out of fear that indicating saving for alcohol would lead to confiscation of the lockbox by CBIDSI.

Revisiting a randomized evaluation to collect fresh data to explain anomalies is rare. This study is among the first to use ethnographic methods to understand the results of a trial.